I read myself into a decline 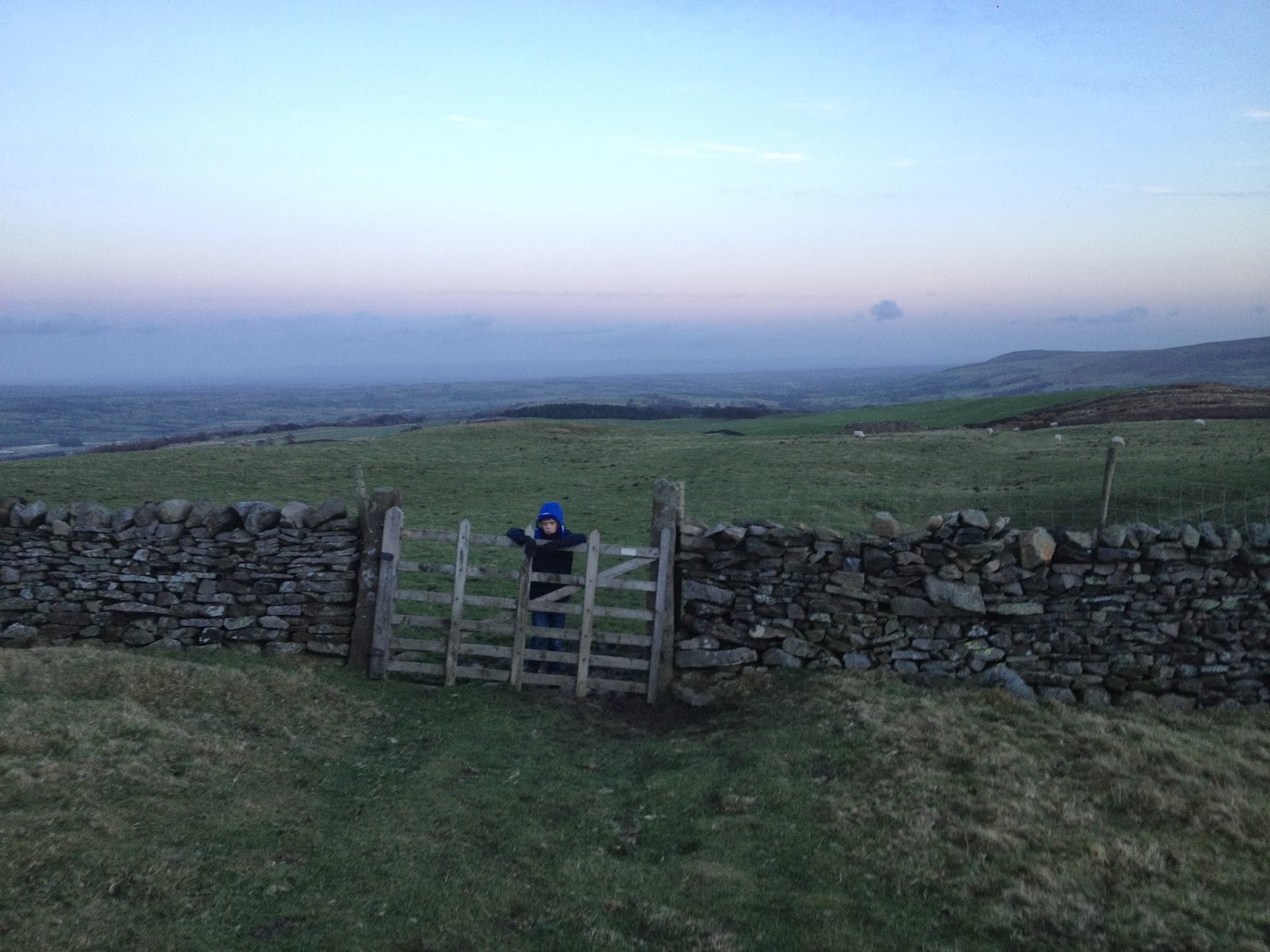 Night falls on North Yorkshire, at approximately 3:45 pm. Soon, the wolves will start to gather.

I have twenty five minutes before I can justifiably throw the children into their pits, snarling and scratching at their bars. You can have them. The minutes, not the children. Well, maybe you can have them too, what with the Top Gear marathon and the precisely pitched shrieks of outrage and the losing of all key possessions and the endless, endless fighting, god, the fighting. Hello! Happy new year.

So, the holidays. We went away for two whole weeks and, apart from repeatedly having to try and placate a distant, content hungry and imperious Content Management System, I spent the whole time disconnected entirely from, well, my brain. In York we sat around in a bovine fashion waiting for Prog Rock to shovel more food into us, as already catalogued here. Then we went to the Dales for a week, where it was dark by four each afternoon and profoundly rainy. Every day we would walk up something boggy and punishingly inhospitable in the morning, eat something involving chips in a pub, then settle in back home for long, delicious afternoons of intensely languorous hygge. Sometimes we sat in front of the fire and watched terrible films, sometimes we played cards; more often I crept away for a long, boiling hot Radox bath, followed by an almost accidental detour to bed, to crawl under the patchwork quilt from my childhood, as familiar (and as worn and ragged) as my own skin. The stream behind the house roared and raged with peaty, fast run off, and the wind was high, but in my bed, everything was warm and heavy and there was usually half a stolen Chocolate Orange and a pint of tea on the bedside table and the ever-present possibility of a small nap. Mmmm, so hygge.

My reading matter, however, was anything but cosy. In order of reading:

Scissors, Paper, Stone - Elizabeth Day
God, this was grim. A sad, tight, claustrophobic tale of a small, unhappy family. Very well done, skin-creepingly tense, some redemption at the end, but left me quite unsettled. Brrr.

Toast, Nigel Slater
I know this lovely, poetic and rather waspishly funny memoir is a paean to the sensual delights of food and full of precise, delicious, affectionate descriptions of 1970s gastro-dubious treats, but what stays with you when the Angel Delight fades is the story of a small boy losing his mother and living a cold and confusing life leached of any affection or warmth.

Maggie and Me, Damian Barr
A really lyrical, sharp, deliciously readable prose style doesn't stop this being a terribly sad story (at least in parts, it's not all misery and in parts it's very funny) about a wee boy, brutalised by his foul stepfather and leading a shitty, confusing, hand to mouth, existence in 1980s Lanarkshire.

Burial Rites, Hannah Kent
OH MY GOD THIS BOOK. I absolutely adored this, it was perfect for the long, dark afternoons with the wind whistling around the stoic sheep of Coverdale. It is, however, an unremittingly bleak tale about a real life 19th century Icelandic murder drama. Beautiful, evocative and BLEAK AS HELL. 19th century Iceland: not a tourist destination. I was fully harrowed at the end. So harrowed.

The Thora Gudmundsdottir novels by Yrsa Siguroardottir
On the recommendation of someone here (for which many thanks, I treasure and follow up all of your book tips and they are almost always bang on), I read three of these, because, despite (i) dismemberments (ii) eyeball removal (iii) a rich catalogue of human misery and dysfunction, they constituted light relief after the forgoing.


Would I recommend? Well. They were all good, no question, but is this really what you need in January? With the overdraft and the new chins and the constant viruses and the endless night? I'm going back to PG Wodehouse, smartish. Maybe even the Pullein-Thompson sisters.

What did you read over the holidays? Would you recommend for surfing the waves of despair of a dreich January?
Posted by Waffle at 21:26

I have been reading Slipstream, Elizabeth Jane Howard's memoir. It's excellent, and then she died this week, so it seems appropriate. Good for her for writing a 5th Cazalet book at 90!

Patience! My lovely friend Mrs Trefusis (who is back blogging, hurrrah) gave me a voucher to get myself this, which I duly did and it is next on my list after a bit of mindless jollity.

I read and enjoyed Hadley Freeman's How to be Awesome, and now I'm finishing D. Sedaris' Let's Explore Diabetes with Owls, also enjoyable.

My favourite author is the late Diana Norman who wrote the most fantastic historical fiction. Her pen name is Ariana Franklin. A lot of her stuff if out of print but well worth getting from Abe books or ebay. Happy New year x

Nah--save the bleakola reading for when it is too hot and sunny--for January, PG Wodehouse all the way--she says as she just finished reading Louise Erdrich's The Round House (rape, murder, Native American oppression, teen-aged revenge assassin).

BTW, the Sebastian Faulks Jeeves and the Wedding Bells is surprisingly good.

Last month I read 'No Man's River' by Farley Mowat and wow has it stayed with me, especially with cold weather settled in.
I plan to look for the Burial Rites and other one by Icelandic sounding author you have recommended- I have a weakness for bleak wintery settings.

The Ocado catalogue. Reading is nothing but a faint memory since I decided to have another baby. Why oh why? *weeps*

I read the fifth Cazalet thing, which was a lovely Xmas read. Also read a couple of early Fred Vargas, but you know all about those. Gave an Asa Larsson Swedish crime thingy a whirl, and enjoyed very much. Also the Peter May Lewis trilogy (also fairly bleak) and The Paris Wife, which I'd recommend.'Private Life' by Jane Smiley, is very good but again - depressing as hell. In contrast, am currently wishing that 'Love, Nina' was long enough to see me through the rest of winter, as I am finding it ridiculously cheering.

Nancy Mitford's collected essays, which is marvellous and wholly recommended for Jan, as is spiky and witty and brill.

Also, Elizabeth Gilbert's Signature of All Things, which is enormously far removed (I imagine - I've not read this) Eat, Pray, Love and is brilliant. I had no idea I could be gripped by the story of a 19th century botanist, but there we have it.

I too loved "Love Nina" - absolutely hilarious and would definitely cheer you up.

I read it last summer, but Wild by Cheryl Strayed was a real find. Brilliant autobiographical story of a woman doing an immense hike in California by herself. Sounds boring but it really wasn't.

NVG - I read that this autumn. GODALMIGHTY, I needed a cover sticker reading "Warning: contains immensely traumatic horse death". Apart from that, brilliant. But oh god, the horse. I cried. On an aeroplane.


I knew I should have sent you The Far Distant Oxus when my Mum found it again http://www.amazon.co.uk/Far-Distant-Oxus-Katharine-Hull/dp/022401658X/ref=sr_1_1?ie=UTF8&qid=1389123098&sr=8-1&keywords=the+far+distant+oxus
I'll bung it in the post to York immediately. And, there's some good deals on 2nd hand Jill books on Amazon. Step away from the grim and bleak, embrace the gymkhana and fluff!

Doh, that last anonymous is Julia who sent you very old pony books in the summer and obviously now has no brain.

Yay, you're back!
To start January well, banish the sad and put a smile on your face, I wholeheartedly recommend watching the Ben Stiller Secret Life of Walter Mitty film. Just perfect for watching with or without the boys. You are guaranteed to laugh out loud several times and the main character is very endearing. Plus, amazing Icelandic landscapes and a brilliant soundtrack.
What's not to love?
Welcome back and the very best of good wishes and unadulterated & undiluted happiness for 2014.
Anon.one

So glad you enjoyed Yrsa. New one soon I think.

Scunder - I loved! Thank you so much for the suggestion.

I have been without internet and return to three new posts, hurrah! Happy New Year!

I'm reading 'The House on Paradise Street' which I got in the Kindle sale and is very good - set in modern Greece, about the aftermath of a man's death which brings his Commie mother home from Russia where she had been exiled after the Civil War. Interesting multi-narrative affair. Of course I've not finished it yet so it could turn nasty.

I love the Cazalet books! Not read the fifth one yet though, looking forward to it.

I've just finished the much hyped and anti-hyped Stoner by John Williams. Quietly bleak and incredibly moving. I'm about to start Love Nina, which I've just treated myself to, as all my Christmas hints were obviously too subtle for my family to get to grips with.

Although wary of all the hype, I've just finished reading Stoner by John Williams,and found it quietly bleak and incredibly moving.
I'm about to start Love Nina, which I'm hoping will be uplifting enough to propel me through to the end of January.

Obviously some intellectual stimulus is also required, as I can't seem to get the hang of even the simplest blog posting! Computing for dummies could be a start...