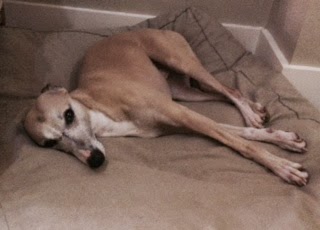 What have I achieved today, I start asking myself, unhelpfully, as the evening draws in and the wolves whippet Roomba children circle hungrily, sensing bacon dust weakness.

Well! I say to myself with considerably less enthusiasm than that exclamation mark implies.

After the protracted business of waking up and nipping at the children's heels like an overzealous collie until they finally left the house ("please go now" you started pleading at 8:20 as one of them languorously, dreamily, laced his first shoe "it's nearly time for you to come home already, I'm begging you"), you walked the dog (discussion with dippy dog walking woman about 'giving yourself permission to say no'), and had a brief burst of productivity.

Then it tailed off, you grumbled gently with M and ate three chocolate biscuits, whilst realising this was going to be your only full day of work until Friday, so you should really get a move on.

Later you got two aggravating emails and became pointlessly enraged.

You calmed down by looking at Elle Belgique and wondering who on earth would want to learn how to make, or eat, spirulina mayonnaise.

Around about midday, you got sidetracked for twenty minutes by feeling sorry for sugar. Poor sugar, so delicious and so relentlessly vilified this month. You're still feeling quite bad for sugar, actually. You wondered if you should write a defence of sugar. You didn't, but spent enough time considering it that you will feel irrationally aggrieved when someone else writes one.

The afternoon crawled by in the habitual hunchbacked semi-stupor, during which you wrote half a Brussels guide and one pitch and continued slowly and reluctantly with another long-standing, arguably long overdue exercise to which you feel you have little to contribute. You had lunch at 3pm because you are stupid, and also because of the late morning biscuits and wondered whether you should give up various jobs due to your own incompetence.

At 4:15 pm you had four squares of Malteser "Teaser" to cover the scent of the contraband half cigarette you smoked during your earlier fit of rage. Well, that was your internal rationale, anyway, in defiance of any kind of basic sense.

You endured a mutually painful half hour of Dutch revision with L with only minor outbreaks of irritation on either side.

Later, you just about kept a shred of dignity in an ill-humoured and stupid fight about Minecraft, but your nine year old was probably on balance more noble, since he made a sincere and touching apology.

- did not remove giant length of rope from Roomba's intestines, but simply turned it upside down and hid it in a cupboard.

- Did not do the washing.

- Did not further the cause of humanity, etc.

- Threw away 12 ancient apples and accompanying crops of penicillin.

- Played with bored rat to compensate for neglectful older child.

- May now understand the proper usage of staan, zitten, hangen  and liggen. Possibly.

- Remembered to buy tinfoil whilst doing the shopping in the incredibly grim supermarket round the corner and also, did not give in to queue despair and curl up in a foetal ball under the display of cheap cigarillos at the till, despite extreme temptation.

- Discovered the Stock Finds twitter account, a great comfort when you spend any amount of time searching for stock images. Tongue lemon rubber glove is my favourite, I think.


(Oh dear. I thought this would be funny but it's just ended up depressing. Tomorrow, maybe spy nautilus, or capybaras or my weekend wedding dancing injury or SOMETHING, anything but more of the same)

How was your Monday?

Given that I started work after noon and read this while eating lunch at 3pm, I'd say my day is on par with yours. Off to a professional development class where I will learn many website improvement things none of which I will actually incorporate into my life--work or personal.

N'est-ce pas. Or indeed not. We shall see.

I put too much pressure on myself to be productive on this, my next to the last day of break. Got overwhelmed and ate peanut butter from the jar. Also spent some time on alert to see which end of the dog the recently consumed green sponge would come out of. The answer is both.

My day off has been spent with an upper respiratory infection. I hate everything. Your sounds lovely in comparison.

Walked around on Achilles' heel, (they say exercise is good for it).

Polished some window hardware, as if I were a Montessori student, and needed to be taught the lesson, "This is life, bitch."

Took a bath and read about a murder, a real one. Could not help identifying with the killer who, after brutally (how else?) murdering most obnoxious guy in most obnoxious country, gave him a couple of kicks before strolling off.

So far today, the significantly late departure of yesterday is being surpassed by aanrijding met een persoon (you can go ahead and pull Anna Karenina now, HBO, thanks)--and the dulcet tones of business German drift downstairs. Going to have to free up some time to give myself permission to say yes, because no has simply never been a problem. In addition to that, must raise a thousand euro for drone camera.

Dear Waffle,
A veil has been drawn over Monday, and may need to be drawn over Tuesday as well. Enough said.
Thought you might enjoy these videos of capybaras bathing at hot springs:
http://en.rocketnews24.com/2012/12/03/30173/

Truly, your Monday sounds way more successful than mine. I spent most of it in a "Ohwhatamidoinghere?!" flap at work, failed to get anything useful done in the office, and also spectacularly failed at replacing the contents of a lost (uninsured...obviously) wallet. Turns out you need money to pay for replacement drivers' licenses and the like...money that necessitates ATM cards. ATM cards that were in the lost wallet. Well done, Me!

in the hacked variation due to the fact that it can trigger a ban. tutuapp pokemon go I wish you comprehend exactly what i said.


Very good post. Thanks for sharing. Imo is the best application for video calling and chatting.

Thank you for sharing the article.
www.hotmail.com