We hit a good patch on both calendars today, although the Etsy one had to be opened with a knife due to over-enthusiastic closing from F. 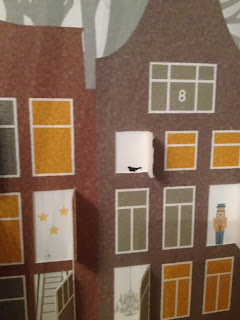 The small stars will, I imagine, go every-bloody-where but they're quite cheery. They can be Roomba's Christmas present. 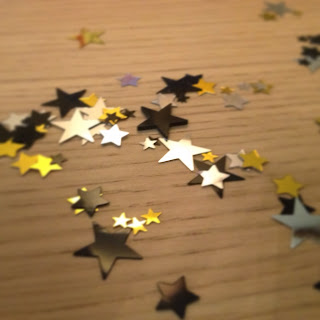 Today I gave in to my craving and went to Ikea. The wrapping paper selection was dreadful, and the slog to the ground floor was endless and Cräp filled, but the CINNAMON ROLLS WERE BACK. The little soft ones, not the massive frozen ones which slap you round the face with cardamom and sugar crystals. Obviously, we did not emerge without various other pieces of tat, but apart from the cinnamon rolls, it was a fairly parsimonious trip. Actually, I am racking my brain to try and work out what we bought and coming up with nothing, except F who purchased four AAA batteries and a plant that looks like it could kill you. Apart from that I have worked, squabbled, failed to tidy and worked again and tried to block out the noise of F and his loudest (though delightful) friend, being wholly hysterical. Cheerful, but hysterical.

L is the only one who has the right idea about Saturday. He cashed in a long-standing token for breakfast in bed, rose around 11 and lay on the sofa in his pyjamas in his shark sleeping bag for most of the rest of the day.

Now I have to try and locate and sign a mislaid deed of trust. Easy.

(What shall I read now? I have finished Shotgun Love Songs - hmmm -  and am failing to engage with a detective thingy. Did people like the Song of Achilles? Would I like it? Or Americanah? I have both on Kindle currently. Or have you read any relentlessly gloomy but gripping Scandinavian style murder I might enjoy?)
Posted by Waffle at 21:30

Your day has been far more productive than mine. I am reading Alice Munro's 'Dear Life' right now and savouring each story. I am someone who typically hates short stories, but she draws you into her world within a few phrases. I have a long list of books I want to read, sitting in my amazon UK account, but I am to cheap to pay £3.99 PER BOOK to ship them to me in Canada. I am hoping youngest daughter brings them back for me when she returns from Uni for the holidays (there have been hints).
You might get some ideas from here: http://www.cbc.ca/books/canadareads/
CBC is doing it's annual book selection where they have (typically literary types) well-known panelists each defend a book, with the public voting on who wins based on these discussions.

Oh I just commented on the previous post about the necessity of buying tealights from IKEA. Good job surviving the tat!

I have book recommendations from the dozen I read in NZ but none are Scandi. 'The Baker's Daughter' by Sarah McCoy (not on kindle), a multi-time, multi-narrative story about civilian life in Nazi Germany; 'The Amazing Adventures of Kavalier and Clay' by Michael Chabon, about two cousins in 1940s America and the golden age of comic books; 'The House of Silence' by Linda Gillard, an odd story about a woman going to meet her boyfriend's parents for Christmas and uncovering their secrets.

Do you have a goodreads.com profile? I've recently joined as a friend absolutely loves it. You can keep track of what you've read and it will recommend you stuff - the more books you rate, the better it gets.

I am loving that hipster Advent calender.

I want to live in that house, with the cat and the excellent lighting.

Oh, I'm very glad you think that LBTW. I am very much enjoying it too, apart from its sub-standard door policy.

Scunder said...
You might enjoy Yrsa Sigmundardottir and her feisty solicitor Thora. Also there is a new Åsa Larsson due soon but that may lead to more dead canines which although snow dusted is not v. Festive.
Am enjoying your advent calendar vicariously, having failed the matchbox download thingy tests
Ikea tomorrow for Tree. And possibly cäffë.

I'm reading Stuart MacBride's dour scottish thrillers about Logan McRae. Set in Aberdeen - so weather is quite Scandi. Murders are grisly too.

I want your Daleks.

If you haven't yet read 'Love, Nina' by Nina Stibbe then I recommend it heartily - very sweet and funny memoir of literary London in the 80s.

I would like to cash in a token and spend the day in a shark sleeping-bag. Why do I have to be a grown up, it's not fair...

I am reading the goldfinch, Donna tart. Good so far but book is monstrously big in hard back. I fear serious injury will occur when I fall asleep reading it,

I'm reading Arabella by Georgette Heyer. It's the opposite of a gloomy Scandinavian murder mystery, but quite diverting.

Americanah is lovely, and fascinating.

I liked the Song of Achilles. I just found the NYT review and boy did Daniel Mendelsohn hate it. He mentions that the adolescence of our heroes in this book is a bit Judy Blume-ish. I didn't find that a problem. Clearly you'll have to decide for yourself.

I like H's recommendation of Chabon. I loved The Yiddish Policemen's Union too. My favorite novel recently is Couch by Parzybok. It's a quest story and kept me off balance in a pleasant way.