Advent calendar disappointment today (there are 2 envelopes in the bundle and I have pleaded with F to get them out of the way for me quickly): 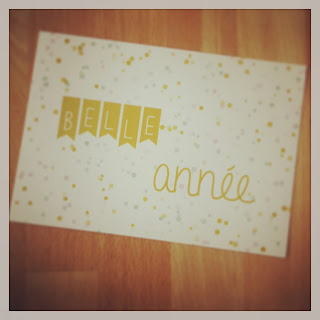 The Etsy calendar did ok: 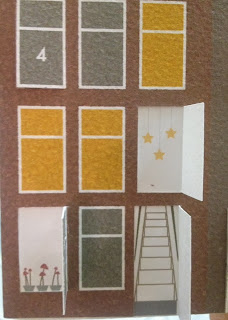 I have been thinking I ought to assemble a list of things I must remember about Christmas so I don't get too excited. So far I have the following:

1. Someone always gets ill. Often all of us get ill, one after another in a bad-tempered, out of synch, succession.

2. There are about 3 hours of daylight in York in December.

If you can think of any, do add in the comments.

- Tried and failed to eat a bread roll full of raw meat. I managed two bites. Belgium, your choice of raw meat garnished with a token sprig of cress as a sandwich filling still defeats me.

- Had a Pierre Marcolini hot chocolate to take the taste away. 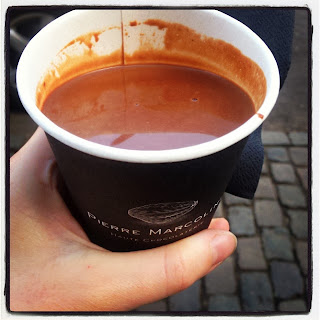 - Became quite riled with the children, who have been significantly less than charming. This has not stopped L, who needs some further training in 'picking his moment', from providing me with this somewhat ambitious Christmas list: 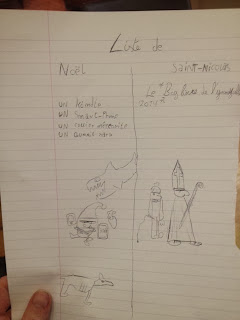 I think it says "a Kindle, a smartphone, a meteorite necklace, a gummy shark". Presumably I'm not supposed to supply the skinny, miserable dog? I mean, we already have one he ignores.

- Discovered Rossetti had two wombats. Now I am really jealous of a dead Pre-Raphaelite.

M: I'll have a starter of 'what is left of the mauresque', please, and a main of 'gothic church'.

E: I believe the bits on the right hand side are the "atmosphere". Music, lighting, smells, sounds, other physical sensations.

M: Somebody comes and wees on your table, then slathers you in butter.

What of your Tuesdays? Was your lamb suitably engloved?

To add to your list;
There is ALWAYS an arguement. Over something stupid.
Usually someone gets drunk and insults other people.
Christmas Telly is NOT AS GOO AS IT USED TO BE.

This is all I can come up with. I am jazzed about Christmas. I am going to Snowdonia to stay on my in-law's farm. I can't wait to eat loads and drink laods and go for wintery walks.

Also, they have 8 sheep, about 30 chickens and ducks, two goats, two dogs AND a new cat an KITTEN.

The excitement is getting to me a bit now.

I followed the website to the origin of that incredible menu and I am pleased to report that they have an "immersive" experience on their front page where you mouse over and words light up, and the one my mouse kept coming back to was "FEAR."

We just last week finished Thanksgiving and are still getting through Hanukkah, so I'm totally not ready to deal with the inevitable downletting of Christmas.

Tuesday: Since we are enjoying a "staycation" we are being tourists in our own town. So, lunch at a new ramen place on the west side and then MoMA, where we looked at the Magritte exhibit and a lot of crap, heads-up-the-asses-of-the-art-world nonsense (Isa Genzken, I'm looking at you), but then a small, really wonderful exhibit by photographer Paul Graham (from your neck of the woods, I believe). Following was drinks and nibbles at our favorite cafe in the Village.

Christmas in southeast Asia really has no hope of fitting the bill At All. Tried to get into the spirit on Friday evening by going to the carol service in the Cathedral of the Sacred Heart, featuring choirs from the British and other international schools as well as a Chinese church choir. The kids were lovely, Rutter and all. The congregation numerous, quite a few speaking loudly in cellphones and/or texting with loud blipping sounds on. Reverend read a very soulful and dramatic English with a heavy Chinese accent and I had to think of something very sad in order not to burst out laughing (not that anyone besides my husband would have minded) the tenth time he shouted E-M-M-A-N-UUUUU-E-L. The All sing hymns where ignored by all around me except for another Swedish family. Handel's Hallelujah was in Chinese, conductor here, accompanist there and the choir all over the place.

And so forth. Fun yes, Christmas spirit no. For the actual Christmas we're going to Tokyo and Nikko where we will all freeze to death since I've booked traditional rooms with futons and paper walls. All I want for Chrismas is a padded pair of pyjamas.

We have just arrived back from our month in New Zealand and the jetlag and the shock of cold and grey Brussels have been tempered, for me, by the excitement about Christmas. Lights! Advent calendars!* Carols! Hot chocolate! Chestnuts roasting on an open fire! Ok so maybe not that last one but I LOVE THE TWINKLY LIGHTS GIVE ME TWINKLY LIGHTS!

My Tuesday revolved around the washing machine and two trips to the supermarket to restock because I forgot anything useful the first time.

* WHAT would the Quakers say about your HEATHEN advent calendars? I am nostalgic for the floppy paper calendars my mum used to buy from the Christian bookshop. But please keep it up. I love seeing what you get every day!

You may be interested that Rossetti's wombat is actually painted onto the walls at the William Morris house in Bexley (and their gift shop is chock full of soft wombats as result). There were also delightful birds in their home-made stained glass windows.
Wombat picture taken at Red House:
https://picasaweb.google.com/103354091260503653338/RedHouseBexley#5953505009547430770

I've been enjoying your blog (silently) for last couple of years

The stoat popping out of the fondant fancy will never be beaten. I'm thinking of using it as my Christmas card next year.

Other things to remember about Christmas:

Dinner experiments that the foodies want you to fawn over

PJ Schoff - Oh, that is WONDERFUL. I am desperate to go.

H - The Quakers would not say anything, but they might LOOK.

Margaret - I SAW those pics in MoMA! It was so weird seeing North Yorkshire motorway service stations in New York.

Cruella - Your account of Chinese christmas left me a bit hysterical.

Also, thank you all for your 'remember how shit Christmas can be' suggestions.

The primary thing that you should know is that a payday advance can be precisely what you require however it is not generally the best decision in each circumstance. Payday Loans Chicago

Many thanks for posting this information. I merely wish to allow you know that I just look into your site and I discover it very intriguing and useful. I am always searching online for articles that can help me. There is obviously a lot to know about this. I think you made some good points in Features also. Keep working, great job. Feel free to visit my site Write my Essay, for writing related help.