If you're finding this whole advent business unbearably twee, apologies. Also, I have something for you today. It is the pile of things I discovered by plunging my hand, heedlessly, into L's schoolbag this morning. 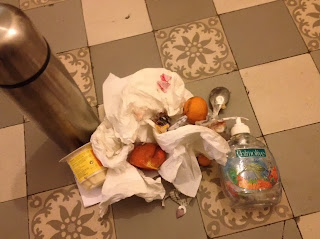 I will not do that again. You need to imagine that all these items are coated in a thick covering of liquid soap and fetid clementine juice. Not pictured: the interesting paste of ring reinforcing thingies, crumbs and soap that had formed in the bottom and which have quite possibly formed a new polymer. That rice pudding is about three months old.

Also, courtesy of B, the cheerily reported headline "Scabies is on the rise across Flanders". Jolly stuff. See, it's not getting too aspirational.

For those of you who, on the other hand, quite liked the cute artisanal crafts, here are today's. 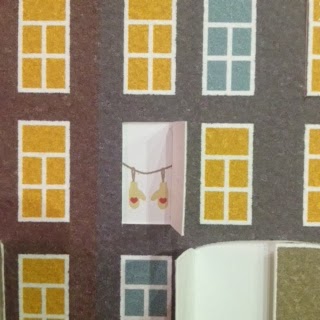 (This looks like the kind of craft project I would suggest on my work Pinterest board, with monstrous hypocrisy, since my house looks more like L's pile of festering rubbish). 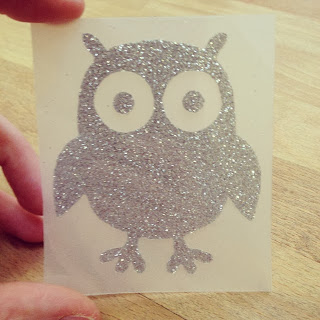 This is one of those iron-on patches. I am fully conscious that at 39, I cannot - and emphatically should not - carry off a sparkly owl patch. My children are not big on glitter. If you have a child who would be delighted with such a thing in their stocking, leave me a comment and I will pick one at random, shove it in an envelope, at the mercy of BPost. That isn't the giveaway I was planning, incidentally. I will get around to that at some point.

We have just returned from the hairdressers, which was demented. L had spotted the peculiar window displays in this local hairdresser and was insistent he wanted to go. I am very glad he did. It is packed with odd salvage art, including a bicycle seat with ears that a man told me was "Prince Charles" and the hairdresser lady beckoned me over very early on in proceedings to point out these two objects: 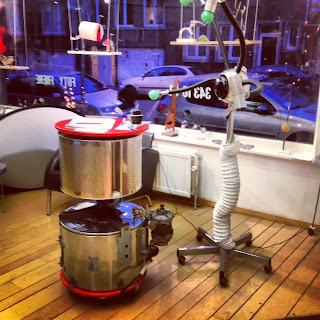 .. and ask me what gender I thought they were. Apparently they gravitate towards each other in the night even if they are stored apart, and she has decided they are in love and should get married. However, to publish the bans of their impending nuptials, she needs to know what sex they are. Loopy, loopy, loopy. Opinions are, apparently, divided pretty much 50:50. It is totally obvious to me that red washing machine drum desk is female, but I am less sure about lightbulb guy. Your thoughts? In any event, we will definitely be going back.

I have to go and split up another fight, also the dog has just slunk past me furtively, carrying a mummified orange in his mouth. More tomorrow, possibly featuring pandas.
Posted by Waffle at 18:28

They are both female. I'm quite sure. Heartwarming same-sex romance in the non-human community!

I am also sure that my 4yo and I need to fight over a sparkly owl. Make it so.

DUDE. Why are you not ironing the f*ck out of that sparkly owl DIRECTLY ONTO A TOTE BAG? I would do it (onto my totebag currently covered in penguin applique that I bought at a what-passes-for-hip-in-Edinburgh market, thank you).

Light bulb male, red thing female - it was instantly obvious to me but inexplicably so.

I think the white light stand is female. Can't you turn the sparkly owl into a brooch?

But it's an OWL - you could iron it onto something you keep by your desk, like a bit of old jean pocket or something, for owl emergencies? No?

The eyeball thing is definitely a bloke, but I don't know why either.

Loving the advent of daily Waffle by the way... x

Why... why would you do such a crazy thing as to plunge your hand into the backpack of a child without wearing a biohazards suit?

The school bag slurm is authentically revolting. You earned your glass of wine there. Why do my children resist unpacking their backpacks until they weigh 50 pounds or smell suspicious? Shudder.

The number of times the teacher had to call my mom to come (make me) clean out my locker when I was in 4th-8th grades (10-15), you would not believe. I blush to realize how at ease I was with a variety of moldy citrus, old gym clothes, and random garbage spilling out from everywhere and how my poor mother must've felt! O_O

woollythinker - you are the only person who has expressed any interest in poor sparkly owl, so HE IS YOURS (insh'BPOST). Email your address?

Tinne - I dunno. I was lulled into a false sense of security by recent absence of foul behaviour. More fool me.

When I cleared out the cave (French prononciation) the other year I found in an old coat's pocket one plastic bag containing to perfectly mummified cinnamon buns, one gym card with me looking considerably younger but demented nevertheless and two hair thingies in the shape of wooden orange lions which my daughter wore when she was Three. She turned sixteen yesterday. Spooky with such a wormhole into a previous Life as it were.

I'm so looking for a sparkling owl to iron on my jacket!
Where can i get one of those?

This could pave the way for new touch gestures and controls, such as a contextual menu that pops up during the hard press.The displays are expected to maintain their current sizes at 4.7-inch in the iPhone 6 and 5.5-inch in the 6 Plus.