God, it's late. I bet you're all breathless with anticipation for more tales of absolutely fuck all. Well, it was sort of worth waiting for, because the advent calendar outdid itself today: 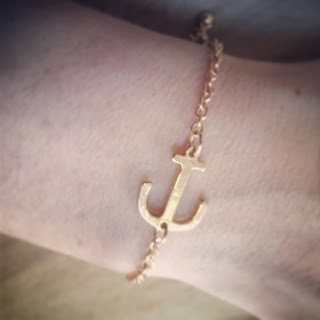 An actual piece of jewellery! That I would wear! My wrist hasn't gone green yet either. This was especially exciting as F had poked the envelope thoroughly and told me it was "a piece of string".

The Etsy calendar has gone traditional: I also got an advent message from my sister, to whom I passed on the advent calendar Prog Rock gave us, which was identical in all respects to the ones he gave us for the three previous years.

"J- 6! i have a confession, today i opened all the advent calender doors to check there was baby jesus. there was :)

Speaking of Prog Rock, this seasonal exchange with home: 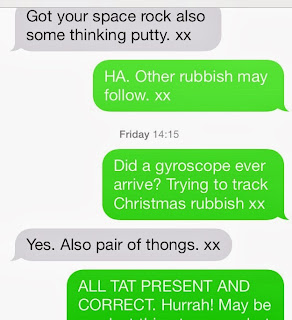 3. Civilised evening watching children play chess, like it was 1958 or something.

4. Managed to actually pay one of the 17 separate sets of bin men who come round this week for Christmas boxes instead of hiding in the dark under the table as usual.

2.  About 7 other pieces of work still to do before Christmas, not including the ones I have doubtless forgotten.

3. Third game of chess degenerated into inconsolable weeping and unreasonable behaviour from all involved.

4. Actually had to stand on doorstep physically emptying child's piggy bank in front of binman.

A no score draw,  I think, which isn't too bad for a Monday. Any achievements your end?

However, still titting about on internet looking at Redlap House, Dartmouth and wishing we'd found the £10m we mislaid last week. So, like you, I have achieved balance, of sorts.

Good luck with the bills and work! X

Yeah, the ostrich hat was one thing, but the grass-lined thongs kind of broke me.

NO ACHIEVEMENTS, outside of some intensive spackling.

My birth certificate has a footprint on it. Spouse took one look and said, "How American"

P.S. Will definitely be getting some thinking putty (for half the neighborhood).

No achievements whatsoever, having a terrible day/ week:

- various evenings spent wrangling child to revise for biology exam that covers 4 months of work that would be more fitting for GCSE level rather than 10-year old level. Helping child manage anxiety about sheer volume of work and level of difficulty (and silently freaking out myself in the process). Child's anxiety manifests as defiance and procrastination, distractedness and lack of concentration,endless fidgeting, engaging in lengthy sterile arguments about how there is no need to learn this bit, only this bit (which makes no sense without the first bit). Very infuriating behaviour in an otherwise delightful child. Wishing I could just step aside, declare revision to be complete and biology to be a complete waste of time, and hope for the best but knowing that without considerable support and help in the revision process there is little hope of passing this exam. Wondering how teacher expects to motivate students with this ridiculous kill-joy system of learning. Having to learn all the stuff myself in the process, wondering why the hell a 10-year old needs to learn the itty-bitty details of how the knee joint works in the first place. Pretty sure there is no need to know about synovial fluid or antagonistic muscles and which one gets shorter/ longer/ thinner/ thicker in which movements. Or the finer points of carbohydrate digestion. No point trying to engage with teacher, very old-school, dictates notes to children and expects it all to be digested and regurgitated perfectly 4 months later. Enough said, I am going around the proverbial bend. To make matters worse, biology is just one of 10 subjects. There is no coordination between teachers about homework/ reasonable workload/ leaving time for revision in run-up to exams/ parents actually having jobs to keep and dinners to make in the evening. All this is on top of at least 2 hours of homework per evening.

- Trying to work and meet an unholy number of deadlines in between multiple interruptions to explain the differences between sinews and ligaments or the position of the meniscus relative to the patella, quiz child on various pages to see what info has been retained and what needs to be revised again, etc. etc. Behind on an endless number of admin tasks, invoicing, etc. No sign of having time to do any of it any time soon.

- Impending arrival of a legion of in-laws for a fortnight of Christmas fun. Not exactly looking forward to the prospect, feeling very unfestive and disinclined but no way out of it now. One in-law very domestic goddess type. Freaking out about the scary contents of many messy cupboards and wardrobes that haven't been tidied in a year at least and the possibility that she might venture to open one of them to look for something and for the entire contents to fall on top of her, landslide style. Wondering how I will have time to make the humble abode presentable for these people in just a few days' time (and continue to meet several deadlines in the meantime).

- Total failure to decorate/ prepare for Christmas and it's just around the corner and I'm supposed to be hosting a huge meal for various in-laws. Tree to buy, presents to buy, food to buy. Etc etc. When/ how/ why did I sign up for this?

Sorry for the long string of woe, but you did ask. To sum up: no achievements to speak of and none on the immediate horizon, either.

Thought you'd like to read these wonderful posts about moving continents, especially the one about people being very polite:

good hence if you happen to be enjoying the clips on youtube open this site the file manager and install it on your telephone. iTube App Download nice.

Thank you for sharing the information, may be useful for many people :)

very useful article, thank you very much and pardon me permission to share the article here admin :

Thanks for the information you have provided, It is very helpful. Please improve again

While doing so complicated for the trainees qualified for the job it will benefit other people AesopOnline Login Hrs of pre-dawn telephone call trying to find substitute instructors to fill up.

Thank you very much for sharing this very useful information, I am very happy to have found this information that I have been looking for
Obat Batuk Berdarah
Obat Radang Tenggorokan
Obat Infeksi Mata
Cara Mengobati Blefaritis
Obat Pengapuran Otak

Thank you very much for sharing this very useful information, I am very happy to have found this information that I have been looking for
Obat Kaligata
Obat Gatal Pada Vagina / Miss V
Obat Nyeri Persendian
Obat Nyeri Lambung
Obat Mata Ikan


I can only express a word of thanks. Because with the content on this blog I can add knowledge I, thank has been sharing this information. Do not forget to visit our website to share information and knowledge about health.
obat benjolan di kelopak mata
cara pemesanan QnC Jelly Gamat
cara mengobati usus kotor

Thank you very much for sharing this very useful information, I am very happy to have found this information that I have been looking for
cara mengobati eksim pada bayi

download Asphalt 8 is easily one of the best games Gameloft has ever developed. We can clearly see that the award-winning Android game company went all in while making this game, as it offers cutting-edge graphics without any sacrifice to the performanc