Yeah, yeah calendar, whatever. Give me another of those nice silver pens.

Over in Etsy land, I am beginning to be concerned about damp in those beautiful seventeenth century Amsterdam townhouses: 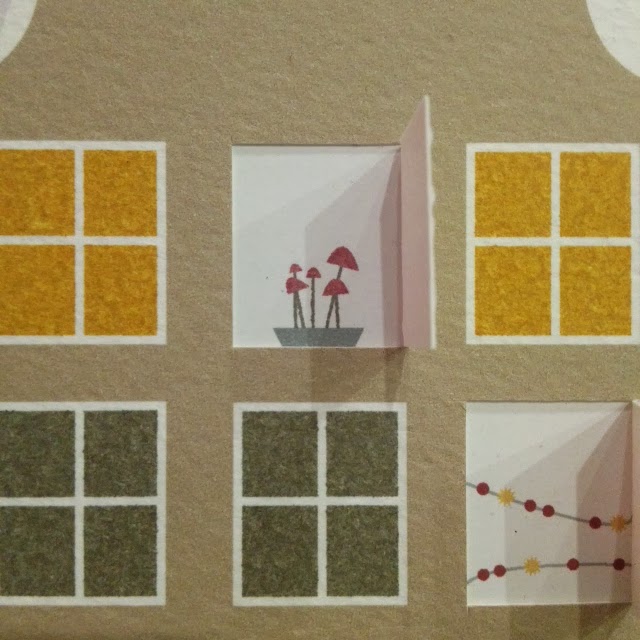 This is the second lot of mushrooms.

So, I have pretty much wholly lost my voice (again, it's becoming an annual occurrence) which leads me to that regular parenting conundrum: what to do when you can no longer shout? Or indeed raise your voice? Or, indeed further, use your voice except to hiss menacingly at very close quarters?  It is chastening how much of my parenting 'style' is based on a fairly bracing tone of voice. Without access to my words, I am reduced to foot stamping like an angry ram to try and get their attention, followed my some combination of the aformentioned hissing, or sign language. It's not really working out for me so far: I had a small, pathetic, silent meltdown when I found out that a child had placed a pizza crust in the dishwasher, but since no one could hear me (or more likely, they were choosing not to hear me), and I quickly got bored of slamming cupboard doors without provoking a reaction, its effect was limited. L was moved to make me honey and lemon tonight without any prompting, which was nice, if a little unnerving.

- Thus it is time for my most favourite children's programme, Friday Download, featuring Dionne Bromfield looking haughty and singing every boy band in Britain off the stage.

- French Masterchef semi-finals, full of overwrought masochistic tweezer action. I am recording the second half, after an emotional vol-au-vent round, where Marie-Hélène was attacked by a a bowl of live crayfish (this is a French Masterchef ritual, repeated every series) and Marc apologised to a lobster before decapitating it, subsequently musing "it's not my favourite part, but they are delicious".

- Bought some saucisson called "Jésus Pur Porc", mainly so I could ask the man in the shop for "twelve slices of Jesus, please".

Oh yes, it's all high culture.

- Have not finished any of my work, which means a weekend of moping around going "I really have to finish my work", followed by finally knuckling down at 9pm on Sunday. Awful. Happens every weekend at the moment.

- Plague skin, due to this week's diet of mince pie, Lemsip and booze.

Tell me about your day-stroke-weekend-stroke cures for voicelessness.
Posted by Waffle at 23:43

Have you tried passive-aggressive white board or note-writing? Do spray bottles only work with cats?

Make some lemon-ginger tea. Add a big bunch of honey. Add a generous squeeze of lemon. (Yes, I know it's already got lemon. Just do it.) Add a large skosh of brandy. Repeat until you get your voice back or the children no longer seem so annoying.

The Christian Brother who taught me Latin never raised his voice. Instead he'd pick up a thick copy of The Aeneid and WHACK us over the head with it. It was pretty effective actually (albeit potentially growth-stunting).
In other news I am sitting on my arse while my mother in law cooks Swedish Christmas dinner. Upside: I get to watch someone else work while I don't. Downside: The house smells of vinegar, rancid fish, and frying meatballs. Ugh.

Re: voicelessness: surely there is an app for that? I am watching the snow fall, wondering which improbable thing I ate yesterday has given me mild food poisoning, and listening to my husband attempt to sleep through the crashing Mega Bloks symphony our toddler is conducting on the bedroom floor.

"foot stamping like an angry ram" is well put. I also resort to that when my repeated exhortations aren't getting any results.

I was once frightened off my bicycle by a ram. I was riding my bike to my horse back riding lesson and there was a ram tethered in a yard on the dirt road that led to the stable. I didn't expect to see such a thing and I did not notice the unmoving ram until I was only 4 feet away from it and it made the largest loudest belch-type noise I have ever heard. I fell of the bicycle but did not stop moving. I dragged the bike to a safe distance and inspected the monster briefly, reassured that it was tied up. (why in the front yard?!)

I have no voice regaining secrets but I enjoy the all hot liquid diet. Soup, tea, coffee, broth, lemon/ginger/honey, repeat!

My friend, a school teacher, resorted to a whistle with an unruly class...

good After that press on the particular hyperlink to check this site your memory to your properly preferred crowd. Kodi Download Latest great.

good Andy can become quickly and very easily downloaded of the established Andy internet site. android emulator for windows Because Nox was engineered with the most up to date Android edition, nice.

Great application will help you unlock, install as well as take pleasure tutuappdownloadz.com similar documents sharing offerings such as the Fine.

good the video such that it is not longer compared to 10 secs. artisto app alternative Here, you will certainly see an option to save the video clip. best.

good and also you'll be eased to know that the rate has been decreasing for Naturepedic No Compromise Dual Firmness truly depends upon the integrity of the cushion you buy great.