Whoa, those pictures I did from my phone on the last post are HUGE. THE LARGEST PIECE OF STRING IN THE WORLD. BEHOLD MY STRING (it appears to be hyperbole day). 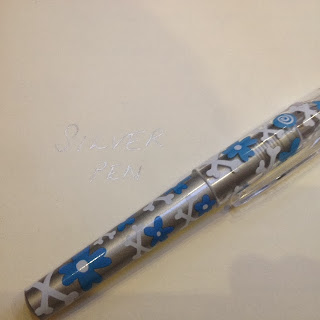 Now this, this silver pen, is excellent. Terrible picture, but it's definitely my favourite advent gift so far. Tomorrow is a boring envelope, you are warned.

Here we have ... I dunno. A decoration. A very poor photograph, certainly; I was trying to keep my nails out of shot because they are genuinely disgusting. They are medieval hobo bad. 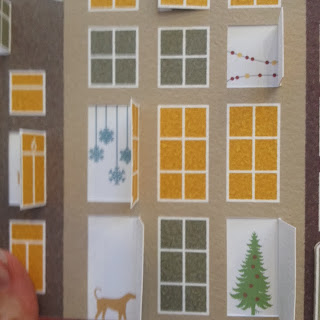 I'm on the way back from London. In a bag at my feet: 5 packets of Walkers Cheese & Onion crisps, 6 mince pies, 2 packets of orange jelly, a large tub of Cadbury's hot chocolate, some pomegranate seeds, 2 Malteser reindeer, a selection box of chocolate biscuits, a packet of Christmas crackers and a Twirl. I'm not even sure I like Twirls, it just winked at me when I was slightly crazed at the Tesco till. Also, I am actually spending Christmas in England, so why I think I need to import all this is an interesting (well, no, interesting is definitely not the right word) question. I used to do this all the time, swanning off to London and buying crap foodstuffs, but then I acquired a modicum of common sense and lost more than a modicum of income. I had a lovely time though, pretending it was 2009 again.

Now I am trying to discreetly eat a mozzarella and avocado baguette next to a serious, spreadsheet composing gentleman. There is no elegant, or even decent, way to eat a filled baguette, is there? I'm always surprised it's legal, let alone socially acceptable, to do this on public transport. Start off trying to be a grown up lady in a nice Max Mara coat, end up a feral snarling polecat, liberally dusted with flour and tomato flecks and drool.  Is this France's poisoned gift to the world? Try and eat this, foreigners. Let's see how you get on you imbéciles. Other foods not to be eaten in the presence of strangers: filled bagel. Any salad with tendrils that can end up dangling out of your mouth like you're a carnivorous insect snacking on its neighbour on the Natural World. Hamburger. Add your own in the comments.

I have totally lost track of this week: all I know is that I am very behind on everything and corporeally, I am about 73% pestilence. I fell asleep sucking three Strepsils simultaneously last night and woke up sort of half choking on one, it didn't even work, I sound like an aggrieved seal when I try and talk. Being on a train in this state feels a little like being Gwyneth Paltrow in Contagion, except without the glamor, the butt of a 22 year old stripper, the kale, the Hong Kong casino high jinks or the death and post-mortem face peeling, or indeed anything except the filthy bark-coughing (what the fuck was that film? I'm still perplexed by what the point of it was. Why? What? Jude Law? Eh?) and the spreading of deadly germs through the population.

The rest of me is composed of unmetabolised carbs and unfocussed panic. We have no home for the remaining RAT for Christmas and the Rat Kennels (there is such a thing in Brussels, fascinatingly) is full. I have another social security bill to pay. Also, as of yesterday I have a hard early January deadline for ending the fucking around on the book proposal pre-submission, which is a good thing, but also a terrifying thing. Shit. You'll buy it if it ever exists, right? Not that I believe it ever will. But theoretically? It's full of death and fondant! All the good stuff.

Now I am going to bark forlornly in my bed like a walrus deprived of its bucket, whilst watching the fascinating Liberty documentary. What news of you?

other things not to be eaten in the presence of strangers:
pasta
anything with tiny seeds or spinach or pesto
barbecue
bananas

and yet, it is embarrassing how many times i have ordered a plate of pasta with pesto and suffered through the indignity of eating the pasta then obsessing over whether there are bits of green still stuck in my teeth, and totally not paying attention to the strangers/guests i am eating with. people who, themselves, were probably suffering through the same thing. there should be a word for that--everyone sitting around the table, self-conscious and embarrassed about eating.

Delurking, albeit anonymously, to say that I will definitely buy your book! Season's Greetings from a cold and snowy Norway.

Just the other day I was eating a filled baguette (cream cheese, ham, sundried tomatoes, lettuce leaves and God knows what else) while driving my car. Luckily is was a solo expedition is all I can say about it....

I promise to buy your book.
And the Paltrow post-mortem was definitely the best thing about Contagion. I fell asleep after that.

Cherry tomatoes. Should you cut them in half, and be that person who eats a salad with a knife and fork, or pop the whole tomato in your mouth, where it will explode and fill your cheeks with tomato juice?

Pizza, when the cheese is hot enough to slide entirely off the slice and land in your lap.

Spicy food that makes your nose run so that you are continually mopping at it while trying to be dignified. Those unpleasantly overstuffed NY deli sandwiches with 3" of solid meat in them, that force you to unhinge your jaw like a snake to get a clean bite and which then vengefully squirt mustard all over your face and shirt while half of the pastrami refuses to be bitten through and when you pull away most of the sandwich filling is revealed to be hanging from your face.

I will definitely buy your book.

I will buy the book full of death, signed, whatever it takes.

We had to bake cookies, for the sake of domestic harmony, and a business meeting. No, I had never heard that baking cookies for them was a thing either. I suggested why don't you just lean in like Sheryl Sandberg (so they can see your cleavage)? Went with stained glass, and you were right, frustrating. My tips are twofold:

Make the cutouts large, because you have to pile the candy up to get any sort of decent coverage.

Or, if you prefer to just go with the frustration, make a gingerbread man shape with a little radiant star cut out of the chest and fill with cherry candy (does not have to be perfect, in fact, if it's a little messy all the better). Pull this out for dessert, and any public transport judging will be minimized.

Tomatos are pretty awful to eat in public. I LOVE tomatoes, but if you try to eat them in a train, there's always danger that the juice or the seeds will explode and drip ALL OVER YOU. And in attempt to empty the tomato, you will make awful noises...

Tomatos are pretty awful to eat in public. I LOVE tomatoes, but if you try to eat them in a train, there's always danger that the juice or the seeds will explode and drip ALL OVER YOU. And in attempt to empty the tomato, you will make awful noises...

Anon - but what about tomatoes? What do you think of them?

Ellie - THE VENGEFUL SANDWICH, YES. WITH THE MEAT FACIAL ACCOUTREMENT. Sorry about the caps, it was just so damn accurate.

good on your smart phones with your pals. Share Download Mobdro for Windows and also the very best emulator on your home best.

I've just installed iStripper, and now I can watch the best virtual strippers on my taskbar.

thank you very useful information admin, and pardon me permission to share articles here may help :