Nothing, really. I feel a bit sick and headachy, but it's related to an up, below. However, scraping the barrel I can give you:

No progress on tedious VAT, obviously.

Forced to watch a large part of an episode of Top Gear by eldest child. This is what purgatory looks like, with Jeremy Clarkson in a wetsuit.

Forgot to record the blood, sweat and perch filleting gladiatorial food combat that is French Masterchef whilst in England at the weekend. Dommage.

I went to review a restaurant with my friend R this lunchtime and they kindly but firmly made us eat an eight course tasting menu (for free). I confess this was no hardship at all, though I did eat so much, I still feel a bit food-drunk and confused. This lopsided chocolate thingy was especially good ( even though I don't normally like chocolate puddings at all) and is standing in for the cake of the day: 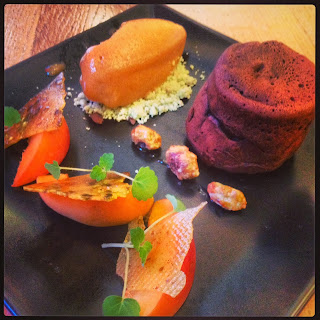 I am extremely intrigued by this, which seems basically to mean talking to strangers, but with an added layer of Art weirdness-stroke-hilarity. Do I dare go along? Can it possibly be as good as The German In the Box? (no)

I met a hilarious man this morning who showed me his hilarious invention (I don't think I can really say what it is, because I would hate anyone else to steal it*) and it cheered up my morning entirely.

I discovered this man on Twitter a few days ago and he is wonderful and funny (in French).

I went to a GOOD new bakery. More of this tomorrow, when I intend to return, much more hungrily.

PICTURE OF THE DAY

My eldest son has developed this pictorial representation of 'everything you need to know about the Belgian revolution but were afraid to ask' as a history test aid: 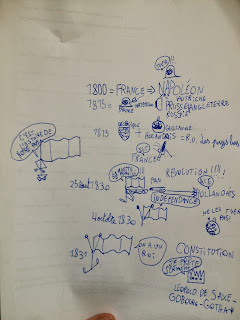 William of Orange gets his own separate picture: 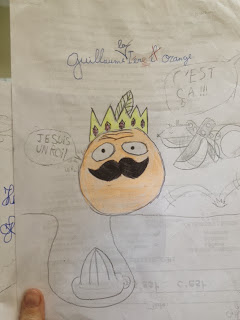 Bed now. Please place your ups and downs of the day in the comments, if you are so inclined.
Posted by Waffle at 22:44

Slightly bored, quite drunk, almost tempted to recreate William of Orange in real fruit form ('Je suis un roi' is so far my favourite thing of the week).

Down: Exhausting, aggravating food related meltdown by my toddler Every. Single. Meal.
Up: Same toddler has started saying "Ey up" in a thick Yorkshire accent. I can only guess someone in Postman Pat says it, otherwise it's completely baffling as we live in deepest Essex.

Top Gear!!! the current bane of my existence. I curse you, netflix, for that. Glad to know another mother of two boys undergoes the same torture. Also school autobiographies where the child has to tell difficult family moments, describing the divorce process to the class (who thinks of this stuff?) Up: dogs hot breath on my feet, sunny Canadian fall day and nicish hair cut. Also oldest boy spending his lawn cutting earnings on his friends. (also a down as all his money gone - wasted on candy)

Up: redwood trees, seeing a ring tailed cat, cows gazing out to sea. Down: double booking the two most expensive rooms on this vacation to the tune of over $300 which no way in hell can be refunded. Up: husband being a real prince about same.
Best mournful dog pic in ages. Could also be "We will always have Paris."

Revolution! Constitution! Pretty much sums it up.

Down: Squiff with husband over his giving a ridiculous sum of money to a roadside vendor of Vietnamese baguettes (very nice ones). "You're hopeless with money, just like you're father", shouted I. Hmm.

Up: Very nice morning swim in the ocean and quiet walk among rice paddies, including roosters and dogs baring their teeth, up to above moment of discord.

Down: I started the day stepping in cat shit, got peed on by a toddler, and sat on a piece of gum stuck to a conference room chair at work. No one (IRL or on news) can talk about anything other than the partial U.S. federal government shutdown, and reporters keep using the word "less" when they should use "fewer." Also, I made no progress on an overdue thing for a major American newspaper (partly because I am busy, but mostly because I am terrified it's irredeemably terrible).

Up: The cat who pooped on the bathroom floor seems to be feeling better. The toddler who peed on me is sweet-tempered and adorable. And I will have my revenge on the slovenly gum chewer at work (as soon as I figure out who did it). The Affordable Care Act debuted today, which means if I lose my job I now can get health insurance in spite of having a preexisting condition and won't have to pay $108,000 out of pocket a year for my autoimmune medications. Also, I've arranged to have two hours working at home tomorrow morning to finish my stupid article, after which time a tough love friend will come over and press "send" on the email to the editor.

Yesterday was one big day of down - endless meetings being torn apart for doing precisely what had been asked of me, and not being able to 'think fast enough'; bad brain! But your red panda and his pumpkin cheered me up no end! I want one. The red panda, not so much the pumpkin. In fact there is a relation of said pumpkin lurking atop my fridge right now that needs attending to in some sort of interesting culinary way...this may be my 'Down' for Wednesday...*shudders*

Down: I am about to face another 8 hours in a gray felt cube, reading and writing endless bullshit emails with twitter as my only amusement.

Up: It is only 6:05am, so not much scope for up, but my coffee was exceptionally delicious this morning and I liked your post about the German in the box.

I have to make an offering of thanks for the daily postings. This is all I've got:

Which is a bit pathetic on my part seeing as it is great to have much more Belgian Waffling.

(last time I looked anyone anywhere can watch TF1 online, or at least the stuff they produce themselves, though I am now in France and can't check)

This is great do you have a catologue if so I would love one to share with friends and family.
South Africa Captain for T20 World Cup 2016

I like the post format as you create user engagement in the complete article. It seems round up of all published posts. Thanks for gauging the informative posts.
cara menggugurkan kandungan
obat aborsi
kalkulator kehamilan
tanda tanda kehamilan

In the relatively recent past, liquidating checks implied anguishing long queues in banks, just to find that your check couldn't be gotten the money for when you achieve the teller. Today, getting the money for checks just requires a couple of minutes of self-benefit from intuitive registration booths. https://www.usacheckcashingstore.com/costa-mesa