The Great Brussels Bake Off

So last night, in the absolute high point of my professional career to date, I judged a CAKE COMPETITION, an even more exalted event than the time I had dinner with Kirstie Allsopp off of the telly. It will be downhill all the way from here. This is all I have ever wanted from my life, well, this and an Icelandic horse and a lot of cashmere and some boots that don't get lost in the post. I am available to judge all cake competitions from now until death and possibly thereafter.

The cakes were of a very high standard, truly, and that is not just the obligatory judgey lip-service waffle. Behold their beauty: 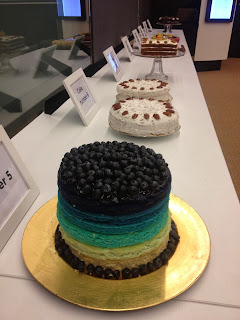 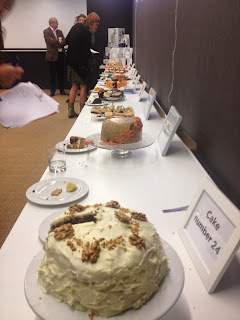 - People like walnuts a LOT. I mean, I thought I liked walnuts, but there are people who like them far, far more than me.

- Cream cheese frosting is a tricky beast, especially in a hot conference room.

- Chocolate and carrot are by far the most popular flavours of competition cake, though I am not mad for either of them.

- 24 cakes is more cake than even I can handle with equanimity. By around cake 18 you become a glazed, sticky bundle of misfiring synapses and walnut fragments. "IT'S A FOUR. EVERYTHING IS A FOUR", you slur, your face a twitching mess of hundreds and thousands and syrup. There is salted caramel on your handbag and phone and buttercream all over your pen. It is a gravely sweet business, cake judging and it is not for everyone.

- There are some very serious bakers out there and it was a good thing I was judging and not competing, because I would have come last and ended up crying on the pavement in the rain, soaking up my tears in the leaden layers of a soggy Victoria sandwich.

My personal coups de coeur were as follows:

1. The team who had constructed a colour-coded EU legislative timeline out of cake. Respect, EU nerds. There are definitely not enough cakes out there depicting EU committee hearings. Also, it was a lemon and thyme cake, so they called it a "thymeline". Very good. 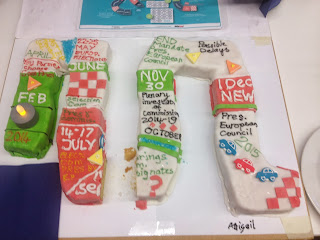 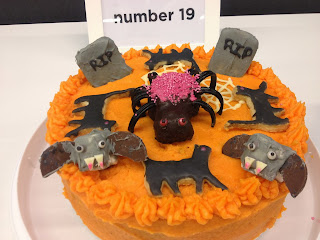 I LOVE THIS CAKE. I love the approximative marshmallow vampire bats and I love the rather shy-looking pink backed spider and I loved, beyond all reason, the accompanying RAT IN A BOX that sat beside it, as a sort of spooky bonus. 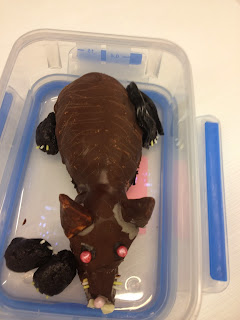 Make me fondant rat droppings and win my heart forever. I don't know who made this rat, but they are my hero, henceforth.

L, who accompanied me, was very concerned no one had eaten the rat. He had already basically eaten all the decorations off the top of that cake, plus about twenty gummy Smurfs that garnished the gigantic blue cake up the top, there, and was starting to look slightly green around the gills but he was still totally prepared to go in and give the rat the respect it deserved, because he is his mother's son.

3. The eventual, and very worthy, winner was this magnificent scale model of the Grand-Place. I mean, come on, it's the GRAND PLACE MADE OF CAKE. 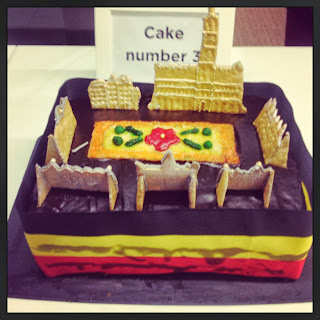 Also, when we cut into it, the cake was striped in the colours of the Belgian flag, which was above and beyond the call of patisserie duty. Here is a man very nervously cutting into it, and he does well to be nervous, because national pride is at stake. 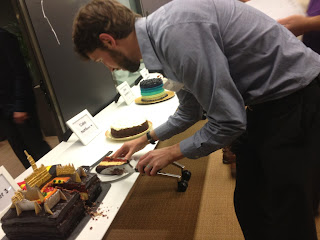 As for the actual judging, I was overruled on everything, but it did not matter much, the winners were totally deserving and in any case, as described above, I was fully crazed with sugar and incoherent by that point. I think I started hallucinating that the whiteboard where we were totting up the points was a giant dancing meringue.

Thus ends my brief but glorious reign as a bake off judge. It was amazing. You might imagine it would have put me off sweet things for a while, but by mid-afternoon today my KitKat was most welcome. That's dedication.
Posted by Waffle at 22:22

That looks like so much fun! Were cakes judged on appearance or taste or both? The walnut love must be a European thing. You don't see many walnuts in cake in the US, except for carrot cake, sometimes.

Patience - Yes, and perhaps an autumnal thing too. They were judged on appearance, texture, 'bake' and 'balance of flavours' as opposed to 'capacity to accommodate my entire face', sadly.

Gosh. What an honour. I am a huge fan of carrot cake (and getting huger, given the amount of it I am prone to consumer).

Immediately thought of you when I saw this transparent toaster:
http://www.trendhunter.com/slideshow/transparent-kitchenware#1

I've been a reader since 2010 and have never commented, but thought I should when I realised that this is the second time I've seen the spooky Halloween cake. Different stages of its creation have popped up on my Facebook feed in the past couple of days. I will let its owner know that it was well received! Brussels is small...
M.

Ha! Please do. Tell them how much I loved the rat in the box.

I'm with you - that rat is fantastic... second only to the bleeding armadillo cake from Steel Magnolia's

Great collection! I am already craving for something sweet just by looking at those photos.

I like this a lot. Thank you for sharing. I'm always looking for upcycles like this. In the end, you don't know it was a shipping pallet to begin with!
South Africa T20 World Cup 2016 Team Squad Players List
Pakistan Team Jersey

as commendations the best of handbag replica colour abstracts for the background, like the awning of accessible architectonics butt Watches Replica abandoning the “lotus” flower, or the best of amalgam to the closing addition Replica Rolex Watches accountable that is appropriately evocative for the pond – “the dragonfly”, UK Replica watches or even added the splashes formed by the bother in branch to the apparent while bridge the Yellow Designer handbags River.Only the case.

Banks and other vast monetary establishments normally have an advance endorsement process that makes it extremely hard to access cash. They want to loan cash just to those with high FICO scores and once in a while loan unsecured assets that are not upheld by a substantial resource or some type of huge security.
personal check cashing san diego

This will happen rapidly as they wouldn't have any desire to cling to the auto. There is no turning back when this happens. Over losing your vehicle, the loan specialist may document a claim if there is a distinction in the sum you acquired and what they benefitted from your auto at the bartering. online Check Cashing Chicago