It was a bit of a shit day, busy and fiddly and crap. I had a lot to do and I did it all day with that slightly buzzy, self-satisfied feeling you (well, I) sometimes get 'look at me, multitasking so efficiently'. Except that by the end of the day I had made several minor fuck ups including getting someone important's name wrong twice and various other misdemeanours, so I have ended up both very tired, deflated and faintly ashamed of myself. Yes, "both" those three things, that is exactly the kind of thing I am talking about.

The children are being really quite unpleasant to each other: on collecting them from school it transpired one had denounced the other to the headmaster for throwing soil (a morally ambivalent act, the denouncing, with which I struggled to deal - snitching on a family member clearly wrong as all mafia dramas tell us, but going to tell a teacher rather than retaliating when someone is behaving like a dick = the parentally approved course of action) and there were tears and recriminations and several sets of unreliable testimony and it's been downhill since then. They are about to both get sent to bed for the second time this evening and it is nowhere near bedtime (actually in the end we played three viciously cathartic truth games of dominoes and everything is more or less ok).

My friend F told me at length about her dream in which I had a penis which was distressing for both of us. 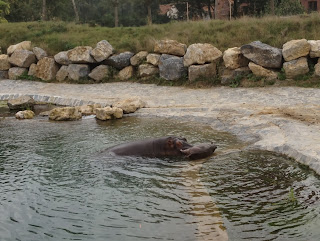 Here it is, being firmly nudged out of the water by its mother. It is not much cop at the swimming yet (it's only about three weeks old): she poked it around with her nose like a barely buoyant sack of potatoes. 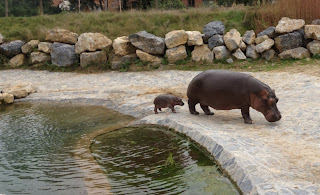 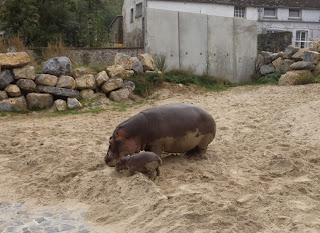 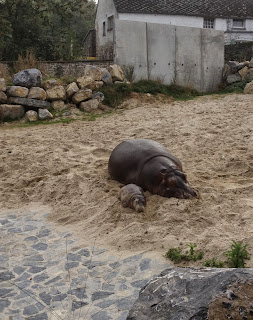 Oh god, I loved the hippo. It was amazing. I keep going back and looking at the pictures at trying moments and smiling to myself . Truly wonderful.

Also, here we are, just sitting on a bench with our goat, yeah. 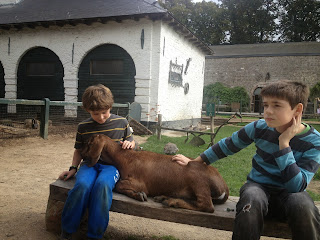 The sacred covenant between man and goat. Or possibly between man's t-shirt and goat's mouth. 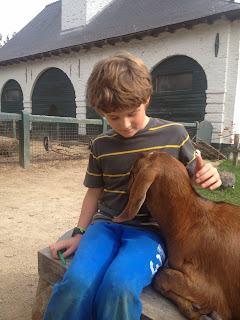 The red river hoglets were quite charming too: 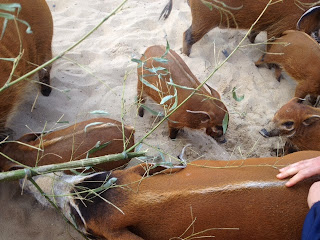 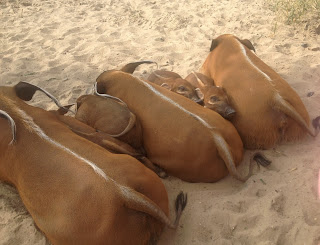 We also met this sweet black and white lemur who was bullied off his island by a gang of dominant females and lived a quiet life hanging upside down in a bush eating berries. 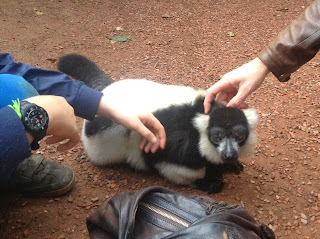 That look in his eyes when he looks at my handbag: I can't decide if it's haunted by the memory of gynocratic oppression, or just sizing up which bit is most likely to contain snacks.

CAKE OF THE DAY

.. is actually the cake of Sunday, but it was very good, particularly as eaten for breakfast and in bed: 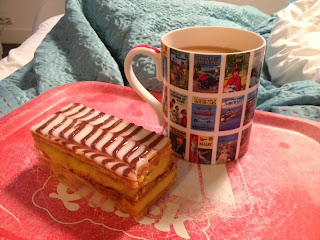 I wish I was back there now, with a baby hippo in my future. Tell me about your weekend, if you are so minded, or about the shitness of your Monday.
Posted by Waffle at 22:34

Oh! The baby hippo made me smile my first genuine smile of the day, as did seeing your cake on a Quick tray. I nicked many of those in my Belgium dwelling days. Thank you!

I'll start again by saying my baby did not poo yesterday. I started my day by bringing my 6 month old to his first swim "lesson" all the while dreading that he'd poo out of his swim diaper. Then shopping with the same dread looming over me. Then my worst fears were realized in a filthy Target. My life is controlled by a baby's colon. Sigh.

So jealous! Of the hippo and the last comment of being controlled by a baby's colon. My life is controlled by a dead guy. A dead husband to be exact. Every day is a shit bag of Mondays, especially ... Monday! That raging fuckwit of a day to be followed tomorrow when I go to the CPA to file taxes with a dead husband. Oh yeah, it sucks here. I hope that helped you, and I am glad you don't have a penis, really. I need to send you a video of our local zoo's polar bear's backflip, as a favor in return. Love the hippo.

Ok, baby's colon and dead husband beat me. Check Engine Light on in car, must rent a car to use while mechanics figure out whats wrong if anything- with car, apparently they will charge me 150 dollars to hook my car up to a fancy diagnostic computer for two minutes. Groomer discovered lump on belly of my beloved dachshund, can't get into vet until tomorrow so I spent the day searching "dog tumors" on the internet trying not to cry. I was at work-but lucky me, I am an exempt federal worker in the US, so I get to work, while most of my colleagues are on indefinite paid vacation, I mean furlough.

Baby Hippooooo! I once saw a pair of them in Zimbabwe, playing together by the side of a floodlit watering hole. It's an enduring memory.

LOVE the hippo mama and baby. what a lovely synchronous relationship. the hippo tot does not appear to whine or fuss. and the mama steers him/her around so they can get out of the water and have a nice lie-down.

Thanks for posting this wondrous sight so all of us wrecks across the world can see it. Blog on!!

I need a baby hippo in my life. If we stole it, could we share joint custody? But we'd also need to steal the mother otherwise that would be cruel. My landlady has a pond. Come on Waffle let's do it!

I have pains in my tummy and deadlines I am in danger of missing. I want to go back to bed please.

Hope you're ok, and that the lack of post yesterday is due to wonderful adventures.

My son has just started Secondary school, he has high functioning autism, in the one month he has been at his new school he has been beaten up 3 times, head smashed against a wall, kicked in head, water poured in shoes, but heyho, that is life for me, this all happened on Monday, yes Monday was shit for me and have been in tears since. Your lovely pics of hippos and goats and other animals is so lovely. Tomorrow is a new day etc etc, but today I feel shit, can we all feel shit together XX

I like the way those red pigs' tails all go in the Same direction. How did that happen?

This is great do you have a catologue if so I would love one to share with friends and family.
West Indies squad for ICC T20 World Cup 2016
T20 WC 2016 England Jersey & Logo

Workers that have to alter, get rid of or add papers should complete liteblue The website and utilize its solutions. LiteBlue is the official login portal.

If you have the login web page of sumdog online account, sumdoglogin currently Sumdog firm will certainly send you an Email with.

A business loan moneylender gives entrepreneurs a whole of loan in advance. In return, the entrepreneur consents to pay back the central sum in addition to the expense, by giving the moneylender an every day level of their visa and ace card deals until the point when the payback is finished. Cash Advance