Conversations with a stranger

Deplorable lateness, my apologies, I was judging a cake competition, of which more later today or tomorrow. 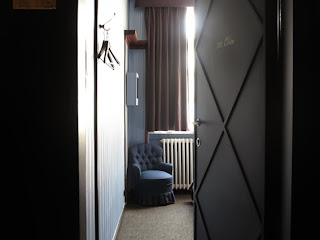 I promised I would write about the immersive theatre performance/happening thingy, so here goes.

So. I bravely went to this thing on Friday night, and it was called "Conversations with a Stranger".

Just to set out my basic attitude towards unpredictable social exchanges, let me set out the categories of conversation with strangers with which I am comfortable:

(i) Basic commercial transactions in a shop or restaurant in a language I speak.

(iii) Elderly ladies on the street who don't bother to wait for you to answer and talk enough for two.

Categories of conversation with strangers with which I am not comfortable:

(i) People at parties.

(v) Pretty much everyone else.

I have been known (frequently) to rehearse basic, uncontentious conversations in my head many times over. That is how socially inept I am. Imagine, then, my state of mind at the thought of conversing, through the medium of interactive theatre, with THREE strangers. I said yes because objectively it sounded amazing, but then spent the next few days totally dreading it.

The event took place at Hôtel Le Berger, which I think is why I was invited (I wrote this about the place, which is amazing, such an odd, dreamy piece of Brussels history), but before you were allowed in, you had to go to the arts centre next door and exchange your ID for a ticket, which was not at all worrying, no.

Next, you went into the hotel reception and were given a key and two envelopes. Or in my case, three envelopes. The first envelope read:

"Go and sit at the "reserved" table behind reception and wait for your first rendez-vous". 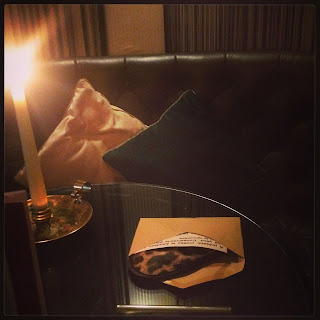 I sat there for a while, then plucked up the courage to look in the envelope. "Put the blindfold on" it said "and keep it on until the end of your encounter". 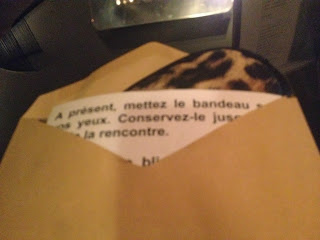 I did as requested and sat in a busy-ish hotel lobby wearing a leopard patterned sleep mask, which is an interesting way to spend a Friday evening. Eventually a woman came over. She did not speak. She took me by both hands, and led me in total darkness, stumbling through the hotel. Eventually we came to a room and she brought me inside, shut the door and gently sat me down on the bed.

The sound of running water. And a recording, of someone's voicemail messages. She's called Jeanne and she's vanished. Various people are concerned, or not too concerned about it.

The person then came back towards me. Took my hands. Washed them in warm water.

BRITISH EMBARRASSMENT LEVELS: off the chart, psyche beginning to shut down.

(I later found out she usually washed feet. That would actually have broken me. My feet are .. no. Just no).

There was still no talking.

After that, she pushed me back so I was lying on the bed, and lay down next to me. Then she sang me a song. It was quite a nice song. The whole thing made me feel quite peculiar.

That was the end of encounter one. I was escorted out of the room, then she whispered in my ear that when I was ready, I could take the blindfold off. That was the first time either of us had spoken.

When I did, my favourite bit of the whole experience started, which was the confused roaming around the hotel corridors, peeping in at other people having confusing experiences, and crossing their paths as they searched for their next encounter. Everyone looked discombobulated and lost, except two elderly gentlemen who were going around together and who were plainly having a whale of a time. They were magnificent. The hotel corridors look like this: 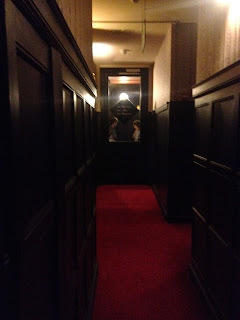 Dark and velvety, with unexpected dead ends and curtains and half-open doors. One bed was covered in plates. There were occasional outbursts of laughter or shouting or music. It was fantastically mad.

My second encounter was with a fellow attendee, who was a Dutch girl. Most of the time we sat, waiting for something to happen, but in fact, we eventually realised, the something was each other. I was not very good at this, predictably.

"I like your skirt", I said. Her skirt was made out of a pair of men's suit trousers turned upside down, and it was exceptionally clever. After this, I had pretty much shot my bolt, conversationally, but we managed a little awkward smalltalk.

Encounter 3 in Room 408 was a man in a suit, washing his hands in the weird, mirror tiled open bathroom. He addressed me as "Madame la Ministre' and proceeded to try and gauge my susceptibility to bribery and corruption for his dodgy Congolese development project. This involved building a forest landscape on the bed out of pillows and a terrible word association game. I am a bit shit at anything improvised and I was DREADFUL at all aspects of this, allowing myself to be corrupted into assisting with his land seizure mainly through politeness.  Thank god I will never have any political power. This was my last encounter, and I found I was quite disappointed it was over. I wanted to stay and poke around more.

Afterwards, you had to go back and write a letter to the people you encountered before you could get your ID back. My letters were terribly polite. "Thank you so much for washing my hands, you have a lovely voice", that kind of thing. God, it is a trial to be English sometimes. Finally the nice ladies returned my passport.

In summary, the whole thing was wonderfully loopy, and I wished I had gone to one of the late night sessions after enough booze to weaken my inhibitions and wandered the corridors for longer. It gave you a weird insight into how Le Berger might have been in its heyday, with peculiar meetings and encounters going on behind every door, which was perhaps part of the point? Maybe? Who knows. Who cares. It was excellent, and even I, with my huge social awkwardness and nagging belief I was Getting It All Wrong enjoyed it. If they ever do it again, I would urge you to go. I mean, anything which involves someone whose job title is "théoricien spécialiste de la sérendipité" has to be good news, surely.

Many thanks to Jeanne and the Conversations with a Stranger team for the invite.
Posted by Waffle at 10:24

It sounds terrifying, yet also fascinating. I don't think I would have lasted through that first encounter without screaming or blindly trying to escape from the room. My ideas about what constitutes a stress-free conversation with a stranger are about the same as yours.

Totally agree with Patience_Crabstick, and I would add that rehearsing conversations is TOTALLY NORMAL. (By which I mean "I do it too.") Over Here there's a lot of media chatter about introversion vs. extroversion; of course, extroversion is the preferred American setting and introverts tend to be regarded as faulty. I've begun to think that we are actually just Brits in American bodies.

All kinds of wonderful and terrifying. I am considered an extrovert but still would struggle with the improvisational aspect of that sort of experience. But I love the idea of poking around a hotel and some of the novelty and unexpected things going on.

Oh holy mackerel. Not at all sure I could have coped with that. Even the Secret Cinema events in London are enough to make me want to crawl inside my skin and die.

I have just read your artical about the hotel.. what a fantastically Brussels place! I loved the whole idea... but there is no way I could do the event you just did. I would have run away. Walk around gawping no problem.. but talk to a stranger, no way..

This honestly made me laugh - I had a bash at stage managing an immersive theatre piece earlier this year (god that is the worst possible sentence I have ever written) and the looks of abject horror on peoples' faces halfway through the show was the absolute highlight.

You're my hero for going to and doing that. That is all.

I like this a lot. Thank you for sharing. I'm always looking for upcycles like this. In the end, you don't know it was a shipping pallet to begin with!
Pakistan Team Squad Players T20 WC 2016
Australia Logo ICC T20 WC 16

The purpose behind this is a payday advance is just intended to enable you to take care of your expenses, on the off chance that you have a crisis, until your next payday.
personal check cashing san diego

Be that as it may, a payday advance is not a viable alternative for long haul budgetary arranging. This loan should just be taken to meet earnest money related requirements until your next payday. Check Cashing Spring-Valley