Aaargh, so tired. Still 3.5 pieces (ok, admittedly 2.5 are small, but those ones are in French and one of them doesn't even exist as an idea in my brain yet, because OH YES, I have no brain left) to write by Sunday.

Drove (most reluctantly) L to his guitar lesson only to find out the guitar teacher had cancelled it without telling us.

Having some issues with these notes of mine for a hotel review: 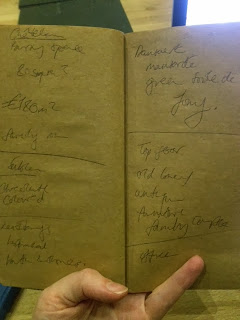 "Botanical"? Possibly "Barry Spence", whoever he is. An interesting "€180m2", however that works. "Sublet chocolate covered"?

The horrifying rustle of YouTube origami tutorials continues. I have been 'gifted' a crane the size of a small dog. I dream of bonfires. 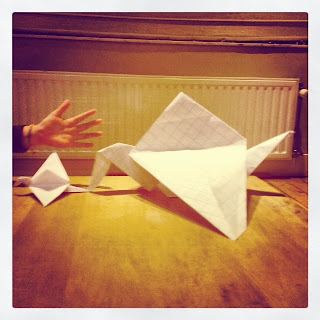 Got a go of a new horse today, the perplexingly named "HERMESS" (I don't know if the capitals are significant). He is excellent, a Rolls Royce of equines, who makes you feel like you're actually really good at this horse business. 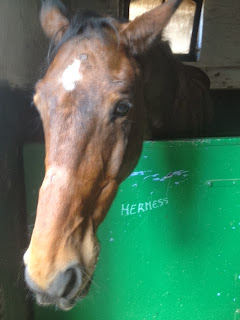 Both children have brought home wholly satisfactory bulletins (half-termly gulag reports), so I do not have to send them down a mine yet, nor indeed pay more attention to their homework, which is a mercy.

M introduced me to an eight-legged Norse Horse, Sleipnir (though why you'd call an eight-legged equine battle badass "Slipper" escapes me) and a boar, or "battle swine" called Hildisvini.

E: They were good at names, the Norses.

M: They were awesome in every way. None of this salvation bullshit, just DESTRUCTION.

E: Perhaps we could bring it back? The world is ready for more smiting, I feel. 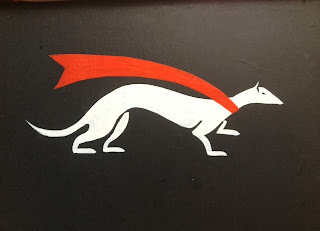 I saw this chap advertising a crêperie on the Rue de Flandre, prompting me to think there should be more caped ferrets on signage. Also, I bet the Norses would have a good name for him.

I always had a little thing for Thor. If you go by Marvel Comics, he's Nordically handsome and muscly. He's also stern and honest, like a Mountie minus the giant hat plus a mighty hammer.

"Battle Ferret" is "kamp ilder" in modern Norwegian, according to Google translate.

But isn't that an ermine? The weasels that turn white in winter?

And none of this is OLD Norse anyway, if that's what you were really looking for.

Is it just me, or does the battle ferret look a little like Oscar wearing a cape?

Fresca - This is very interesting. What we REALLY need is a mustelid expert, like ms Flora, Fauna, Dinner to weigh in on our match weasel. Also, I cannot stop laughing at "match weasel".

Margaret - I find him dull and earnest, like a man I used to share an office with. However, there is the mighty hammer, as you say.

Facegoop is on the front page of the Guardian website. Congrats!

When I was a nipper, we had a vast top-loading washing machine called THOR. We referred to it as 'The Great God of Washing'. It made a noise like a tardis as it juddered across the kitchen linoleum. And it smote the ass off that dirt, of course.

Caped weasel is the emblem of the city of Vannes, where it made me snigger over the holidays. Have a nice one, by the way, I'll be glad to see you back.

In Swedish "Super ferret" would be "super iller"

Norwegian for ferret is pinnsviget.

Kind of lame. Your boys could think of something better....

It is good we use in herbal medicine, as they may awake to the authenticity of the drug product :)

Advertisement free individuals will certainly be permitted to view Mobdro App which popup between of your streaming. It additionally permits.

To help with this issue, organizations offer payday advances to the individuals who are in urgent need of money. Sadly, these sorts of credits regularly require printed material and archivesCash Advance San-diegoCash AdvanceAuto Title LoansPayday Loans Chula-vistaCash Advance Corona

You could conveniently locate them at nationwide sellers like Chewy, Petco and also Amazon. dog food advisor have any type of unique storage space needs.

The main time the borrower can lose his auto is the point at which he or she defaults from installment. Losing your auto as the result of the non-installment of the advance is one reason why it is critical to reimburse the credit. In reimbursing the credit, loaning firms enable the customer to pick the term of installment. Along these lines, you would have the capacity to meet your installments in your own particular terms. It would likewise be less demanding for you to reimburse the advance. Payday Loans Lemon-Grove