Weekend in the Country, etc.

What, what. It seems wilfully gloomy always to start with 'down', but (i) if I didn't then I'd end with it and that would be worse, and (ii) it's almost certainly an accurate reflection of my character. So.

Returning from a weekend at Tetanus Manor late on Sunday means there is no food in the house, nor even any loo roll and I have already emptied the freezer after a previous episode of food shopping ennui, so dinner tonight is dust, probably.  Dust, a shrivelled mushroom reminiscent of a Pitt Rivers museum shrunken head, a giant Poundland candy cane that is 10 months old, three soft carrots, plus all the expired UHT cream you can drink. Also, I have just had to go to the night shop to buy dishwasher tablets and they were €9 for 20 and I only had €9 precisely and thus did not have enough to buy a Nutrageous and now I want to smash things.

I went on a spontaneous lunchtime trip out to a café, but the café was shut and so was the shop where I was planning to get some food, and when I got off my tram I got a call saying I had to go home and find an important number on a piece of paper (by the time I was nearly home I got another call saying this was no longer necessary). Moral: there is no place for spontaneity on Mondays.

No news on my thieved boots from either BPost, the sender or my thieving bastard neighbours.

Read something I pitched 6 months ago in the paper this weekend. Grrrrr, I hate that (not that I think it's anything other than two people having the same idea; I'm just annoyed that someone else had the same idea and had more success with it. Also, my version would have had many more laughs, or so I tell myself, staring stonily at the screen without a hint of a laugh anywhere in anything I'm doing).

Lovely, if very short, time at Tetanus Manor, with much bucolic apple collecting (children), juice making (children), poking of dead things (children) catching of toads out of the drains (children), shouting (my father), eating (all) and standing with arse glued to boiling hot Aga, drinking wine and reading the paper (me).

There were a great deal of apples. 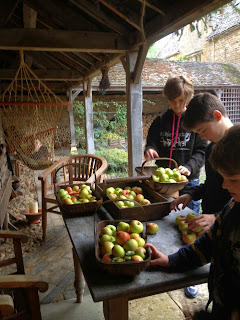 My father mustered his army of child slaves: 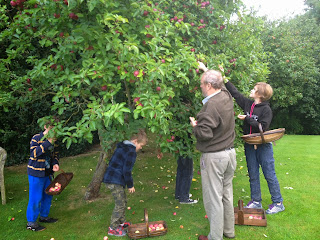 There was also an epic, incompetent magic show by all the children which was extremely, though unintentionally, funny. L bought a trick involving chains and we spent a fraught hour trying to get it to work, both getting locked into the chains in farcical fashion. My niece did a trick with a glowing finger which had to be restarted after technical difficulties. My nephew did something cavalier with coins and F did a terrifyingly intense many staged card trick. All the adults drank heavily throughout (is this a leitmotiv of the weekend? Why yes, yes it is).

Getting away made me feel quite optimistic and I was able to read magazines on the way home without the usual sick burn of envy and self-hatred and think that maybe one day I, too, would be able to formulate ideas again (this has largely worn off now, but it was nice while it lasted).

To top the whole thing off, Shipston-on-Stour was holding a food festival. We filled in a quiz on vegetables from the NFU, fake signed up to NFU insurance in return for a cow shaped stress toy, estimated the weight of a grotesque pumpkin and bought a profusion of solid and delicious cakes from wholesome women who looked like Mary Berry's sisters. Sadly, the man with the rabbit on a lead was not in evidence.

Train journeys with enormous children are so much easier than train journeys with small ones.  They are events to be looked forward to, conducive to the reading of books and even, if the timing permits, to the drinking of cans of G and T. The children were endearingly horrified by the commuter train out of Marylebone station on Friday night, however, which was packed, and complained heart-rendingly about having to sit on the floor by the toilets in someone's groin. Belgium has made them soft: they used to commute uncomplainingly on the Circle Line every morning at 8, which is a whole other level of discomfort.
On my abortive spontaneous tram journey this morning, several people were touchingly nice to this art student transporting his giant .. thing, including several who you would not necessarily have expected to be quite so open to a giant ... thing. 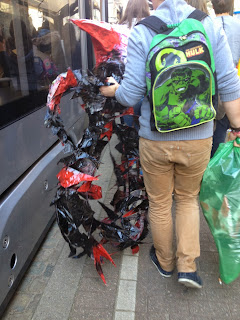 "C'est beau" said the elderly lady opposite him approvingly after quizzing him at length on the paint used and general creative process and several other tough eggs nodded their agreement.

Tea and cake of the day, somewhat wonkily depicted and, after being thwarted on my café trip, consumed at home (Lyle's Ginger, Kusmi Smoky Earl Grey): 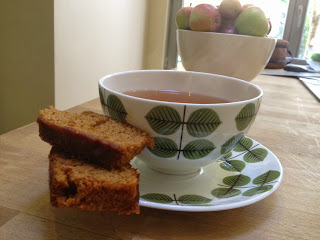 What is it with Lyles Ginger Cake and its fiendishly moreish texture? I could eat a whole one in around 15 minutes and barely notice. It's like Pannetone, but without any hint of Continental sophistication.

It's nearly October, which marks the return of the Enormously Aesthetically Unpleasing Pumpkins to the shops of Uccle, as previously documented here. This specimen in a local estate agent's window is particularly terrifying: 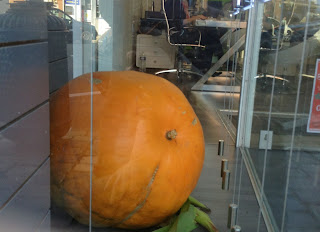 It is plainly biding its time until that woman's attention is elsewhere, when it will rumble menacingly and inexorably over to her ergonomic office chair and crush her flat. Now that's a properly scary Halloween vision for you.

More pumpkin news as we have it. How was your weekend?
Posted by Waffle at 21:41

Sounds like you had a very autumnal weekend, the magic show sounded awesome! Love your cup and saucer in your ginger cake photo, just my sort of thing :)

I heartily approve of cans of G&T on trains! And I too love your crockery, and agree that Lyle's cakes are incredibly moreish (I love the golden syrup one best). I'm glad you had such a nice weekend.

My weekend? I passed my viva with no corrections (still slightly shocked, but enjoying people calling me Dr. Helen) so I was actually quite nearby, in Oxford, drinking heavily.

Oh, oh, oh, the pumpkins! I remember reading your last post about them (2010, really?!) and snorting with laughter.

My cat has somehow figured out when I'm about to take a nap, when I'm drifting off and comes scratching at the door. I have to let him inside and wait until he eats and sometime drinks before he will go out again. This is on the good days. On other days he insists he has a petting deficit and must be picked and petted. I am very tired but my cat is happy.

I like your idea of posting downs first, then ups. and I shall institute an afternoon tea & cake period here, too. your influence is worldwide!!

Whaaat, Stig Lindberg crockery and my favourite too - Berså! Do you have It All, pray? I've got but one egg cup and the sort of solid butter container no one uses any longer.

Very, very envious of weekend in the English countryside, Aga and all. I'm currently overseeing a typhoon in Vietnam, have to run. (Not so bad actually. Resort with large high-ceilinged rooms, spa with nice treatments for next to nothing, two minutes to the beach where toothless old people put very small plastic furniture out at night along with glowing candle lights. Yesterday evening, back from the Unesco world heritage town of Hoi An, I and my son J ventured down there. I ordered a can of the local beer, he a glass of fresh mango juice. I got my Larue. He got an oppressively sweet glass of iced coffee. I doubt he's asleep yet, ten hours later.)

The giant pumpkin is strangely reminiscent of The Prisoner. "I'm not just an Estate Agent!"

I don't think UHT cream ever really expires. I love the story about the art student and his "thing." I have an art student daughter and we have had to transport some very unwieldy items over the years.

This is great do you have a catologue if so I would love one to share with friends and family.
Pakistan Team Captain Name ICC T20 World Cup 2016

Does this sound silly and unthinkable? On a few focuses, it is. Since in what manner can a bank confirm your check and your distinguishing proof on the off chance that you are getting the money for the check through the Internet? Moreover, how might you get the money if your check has been confirmed and handled? usacheckcashingstore.com/Lemon-Grove