The pain of snacks

My sinuses are angry and I have approximately 8000 mosquito bites and there is a huge ladder in my Wolfords and I keep having to take my wig off and scratch like a rabid dog. Also, I spent a portion of today looking at jobs and concluding I could not do any of them.

My street seems to have become the place where mad people come to stand and shout angrily today.

I have eaten too much due to Great British Bake Off Sympathy Snacking and now I cannot breathe due to a giant mass of cake in my abdomen.

One child has spent part of the afternoon trying to make cornflour slime vibrate with sound waves resulting in kitchen carnage and the other is enlisting my help to break into a briefcase he found in a bin for reasons that remain wholly opaque. Come back, Mario and Luigi, all is forgiven.

Daily blogging is just revealing that I am a boring, relentlessly negative hermit, isn't it. I may have to start inventing amusing incidents.

Ack, my computer is being temperamental about charging. Grave news.

A stupid tiny work thing I was fretting about last night has resolved itself without me having to do anything.

An absolutely lovely escape from the house this lunchtime to go and talk about an upcoming exhibition by this lady, who is a delight. She makes beautiful intricate paper art, and her new exhibition is going to be beautiful and there was beautiful sunshine in her beautiful workshop and I have used the word "beautiful" seven hundred times now, because I am excellent at description. But there were intricate fern patterned wrought iron fire guards in front of roaring fires, papier mâché monkeys, giant koi carp flicking around a deep shaded pond, and a light filled workshop full of quietly industrious people making gorgeous things with their hands. There was also wine and a nice lunch and chocolate cake. I'd have been utterly charmed even without the Tuesday lunchtime wine (I've written about her before, I'm a groupie), but that made it even better. Also, she is married to a COUNT who she met at a masked ball and he is incredibly charming and called Werner and told me a story about ending up in a bar drinking whisky with Thom Yorke and not having a clue who he was. Sigh. I wish I was a brilliant Belgian aristocrat. It looks lovely.

L is now doing school cookery club and has come home with a cake aux olives. It strikes me that all school baking classes specialise in making you cook things you wouldn't dream of making for yourself, cf. rock buns and all those baked savoury things with tomato slices on the top. Not that we had cookery classes at Quaker school, because making a wooden pull along rabbit and a pottery egg cup and knowing how to recreate Cézanne's Card Players as a tableau vivant were deemed more important life skills. This savoury cake business is a rum thing, but I like: (i) cake (ii) olives and (iii) cheese which seems to be the other principle ingredient, so I am giving it the college try.

F has been watching a stupid TV programme called 'Who let the dogs out' in which children train their dogs to do underwhelming tricks and is now trying what he has learned out on weepette. Weepette is stunningly terrible at it. Mainly he stares blankly at F with a strained look of confusion in his big black eyes. Sometimes he sits down hopefully with one paw half raised in supplication, since that is the only "trick" he knows. He is not doing too badly out of it, incidentally, because he gets a lot of treats to try and bribe him into the simplest manoeuvre. Often, as F chirrups "In! In!" insistently, trying to get weepette to go through his legs, weepette just pads away gently and sits in the kitchen waiting for it all to be over.

Incidentally, a drunk on the street yesterday described weepette as "ce lévrier croisé hamster" or 'that greyhound-hamster cross', which is harsh but may have an element of truth.

Here is a man eating a Cornetto on the 38 bus at 11am, which is the kind of thing for which an old lady would knife you in Paris. In Brussels it excites nothing stronger than mild envy. 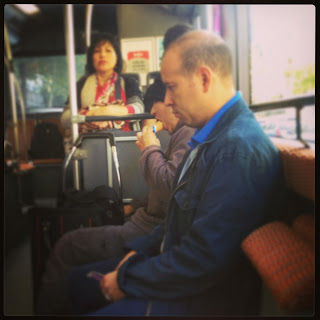 What of your Tuesday?
Posted by Waffle at 23:03

Those Parisian old ladies will cut a bitch!!

I feel validated that I didn't love Paris. I'd much rather live where a man can eat a Cornetto in peace at any time of the day.

Please don't stop updating daily. I love it. So does everybody else.

Your first sentence - oh, jeepers, you are a marvel.

My Tuesday was its usual whirl of inefficiency, dithering, ADHD farting about and 'Oh, look at the time' panics. It's a surprise I am allowed to look after my own children. I suspect they'd prefer it if I didn't...

Ellie (above) is right - pleazzze keep updating daily. She loves it. I am one of the everybody elses, and I love it too..

You met her? She's...huge. I'm consumed with envy.

Tuesday is filled with mild congestion and a hacking cough.

What happens if you talk back to old Parisian ladies? How would "Back off, lady!" go over? I've been there twice and never been hassled, but I'm a native New Yorker and will give cut not only a butch but an elderly bitch. Yeah, Grandma, I'm looking at you.

Have your kids come across minecraft? You know, incase you want to do a little less cornflour activity and a little more sitting-on-the-sofa activity...

You do give beautiful descriptions though! ;-)

Please keep writing every day. You are amazing.

nice post friend , Thank you for sharing with us, and we sincerely hope you will continue to update or post other articles
obat penguat rahim lemah untuk mencegah keguguran berulang

Moreover, you have to list the names, locations and telephone number of your references. You additionally require a legitimate driver's permit as evidence of ID.car title loans chicago

Gone are the days for profound Link Buildings. Clients are requesting stages where they can share their perspectives and surveys on items and administrations. What's more, our confided in SEO benefits in India causes them in conveying those stages. Which empowers us to convey unrivaled outcomes and monstrous online incomes for our customers and an extraordinary brand encounters to their clients.
search engine optimization