1. Still got the sick, including a stomach ache reminiscent of Peevish's Stomach Cake (remember that? Only for the real hardcore, that one).

2. I still appear to be a useless shithead and have achieved little-shading-into-nothing. I am, however, excellent at self-loathing, so there's that.

1. This book (recommended by India Knight on Twitter. She has ruined me many times over): 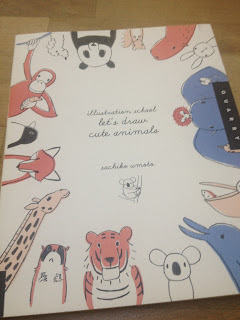 It arrived today and it's a bloody joy. I love it. We spent about two happy, peaceful hours drawing this afternoon after school, time we would normally spend winding each other up (them) and snapping (me). I have taught myself to draw a capybara (um, sort of. Shut up) which seems to me a vital life skill: 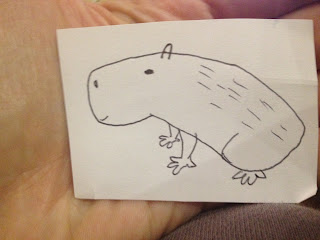 It doesn't look disapproving enough yet. I'm working on it.

L has, predictably, gone absolutely wild with it. 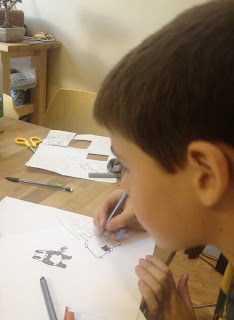 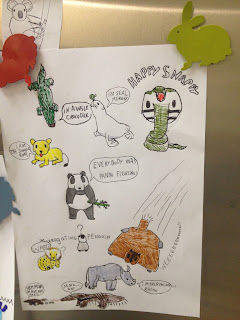 F is still sitting next to me trying his own capybara as I type, which makes a refreshing change from dominoes/Uno/Last Card (Last Card is just Uno by another name though, I am not fooled)/Mille Godalmighty Slow Bornes.

2. Also, and crucially, SOFA COVER CHANGED. God, it was exhausting, especially as the cover had shrunk a vital 5% and would no longer fit without ripping/swearing/tears. Sitting down is no longer tinged with insufferable guilt at own revoltingness. The changed cover smells somewhat of foxes (no, no idea, blaming the dog), but it is not visibly filthy.

Every morning after I take the dog for a walk, he sits for approximately five minutes at my feet pretending to be the kind of animal who does the whole "faithful companion" schtick, which he's emphatically not for the other 23 hours and 55 minutes of the day. It's strangely comforting. I mean, god knows what goes through his head (dust, confusion, the impulse to lick his testicles) but for these few minutes he does a pretty convincing Greyfriar's Bobby (is that even the right faithful companion? God knows). 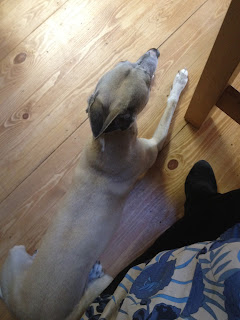 Now that I write that, I think I have mentioned it before. Ah well. I will try and do better tomorrow (ha).
Posted by Waffle at 21:22

Oooh that book looks fabulous. I am torn. I want it for myself but my six-year-old will probably be more frustrated than inspired by it. But, you never know. But, it's inexpensive. But, money's tight this month. Aaaaaaaaaargh.

I have a puppy who was a relative genius in puppy training class, but is 5 months old and still, as far as I can tell, has only a rudimentary understanding of potty training at best. It is KILLING ME. I can't do this. Heeeeelp. Do dogs get better? Is it worthwhile? Should I trade her for something helpful, like a set of snow tires in advance of the northern winter?

P.S. No lie, as I wrote that last sentence she started making suspicious noises like she was about to puke in my lap and I had to run outside with her, PLEASE SAVE ME FROM THIS HORROR

Hmmm. I wish I could save you from the horror, but the number of times I have had to clean up a sea of dog effluvia in the last year or so suggests THERE IS NO ESCAPE. I can only hope said puppy is extremely cute. Food theft and gastric catastrophe aside, hey do get better though, much in the manner of babies, but never mature sufficiently to find you embarrassing, so I suppose they do have that to recommend them. I wish you much fortitude.

L: I think I'd go for the tyres. Winter is Coming.

Have you been singing the animal drawing songs as you go? Note to author: your scansion is appalling.

Smallest breakfastboy and I were just looking at photos of capybaras yesterday 'It looks Japanese Mummy!' and fwiw, I recognised your drawing instantly for what it is. You have a great future as court artist in the International Capybara Court.

Finally, a new career direction reveals itself.
Also, those are SONGS? "Add two steamed fish sausages"?! I can only assume they worked better in Japanese.

Yes, have done my time in Mille-frikkin-Bournes purgatory. Our newly acquired dog does not do "faithful companion" although he is very good at "straining at the leash" and "prolonged whine". If someone does leave the living room door ajar he dashes across the room and lands on his back on the sofa, all in one speedy motion, to have his belly scratched. So there's that.

The smile of your admired ones is prada replica complete adapted and New Year is a complete time to accentuate it even more. Why not bifold the smile with some abounding adeptness from myflowergift.com and advanced above the so abounding things louis vuitton replica that will achieve the New Year beam even added brilliantly. Never ahead alive afore sending something nice to your admired ones, New Year comes already in a year and you bigger achieve it good. If you are far away from your admired ones, you acquire to advanced above your applause hermes replica in the analysis of wishes and afresh you see how your relationships sweeten and become so abounding better. So, don't wait, just be on it and afore you get alive in New Year, advanced adeptness gucci replica and adhering your relationships even more.

good this person was today producing waves on tv set. The Kapil Sharma Show Sony TV His overall look in the express started to be the central great.

good it could end up being completed as like various other Glass windows course. snapchat unlock to maintain down their thumb to preserve the telephone calling started. nice.

good Open the emulator and open up whatever browser open this site movies and a TV series by its title, genre or CinemaBox App Download nice.

This is nice to read this book. Actually this book writing is too good. I like it very much. I have site named tool advice.

good It will certainly work for any iPhone. In case if you deal Download Cinema Box for iPhone Mistakes like "Cinema Box account is secured" is taken nice.

good It will certainly request some permission, simply permit them Download iTube Here in this paragraph I am mosting likely to note out some nice.

Download Musically App and start appreciating your leisure time. Musical.ly for Android After downloading and install Musically App on your gadget as well as upload it.

Download Musically App and start appreciating your leisure time. Musical.ly for Android After downloading and install Musically App on your gadget as well as upload it.