1. I went to a shop opening party last night on my own, because it seemed like a good idea and glamorous and I was sort of hoping I'd run into people I know, but I couldn't find anyone at all in the giant, boiling hot crush of youthful, glowing, exuberant, bearded Belgian hipsters. I shuffled around for four minutes (I was wearing heels for the first time since my pre-holiday running for a tram accident, and it was agony, my ankle is obviously still buggered) pretending to be absorbed in examining things, then gave up and went home, feeling like an idiot. Feeble. I did not even manage to shove my way to the bar. On the tram home, a very elderly gentleman with no teeth was doing acrobatics in slippers and shouting. I'm not sure if that's really a 'down', but there was the constant and very real fear he might take his clothes off.

2. I have taken to calling the children "my friend" in the manner of Hercule Poirot, and cannot stop even though it is very peculiar.

3. The rats woke me up in the middle of the night tipping their house over in a very "your house is invaded by armed burglars" fashion. This, coming after a night where I had to share my bed with F who was "too hot" and thrashed repetitively all night in the manner of some giant barracuda Robson Green might catch on that Extreme Fishing programme that I have obviously never watched, because who watches fishing programmes, means that I am somewhat fatigued. Well, very fatigued. I want to crawl away and sleep in a bush. I might actually do that, but F will track me down with his new bushcraft skills. He is still renouncing all forms of electronic entertainment whilst refusing to read a book, so I have played 850 games of Uno in the last twenty four hours.

1. On arrival home after the party débâcle, I ate a Cornetto in front of Educating Yorkshire, which was a very satisfactory alternative evening. Also, on the way home I crossed the path of my very favourite Brussels character, Didier Vervaeren. DV is something big in fashion (he used to work for Delvaux, but he's now a sort of eminence noire for the Belgian creative industries) and I quite often see him at these kinds of dos (I go as often as I can, even though I usually end up creeping around the walls for five minutes then leaving. Give me another few years and I might actually talk to someone). He was wearing his habitual floor length black leather trench coat (it was 30°C) and giant stack heeled boots and looking extremely haughty, like a Belgian Karl Lagerfeld. I once went to some event where he had "curated" the buffet, which featured a sort of Day of the Dead watermelon skull lucky dip that you put your hand in to get a bracelet and since then I have had a mad platonic crush on him and his look of withering disdain (that, incidentally, was another event I turned up at, walked stiffly around for four minutes and left. Maybe I shouldn't go to these things on my own. I think I mainly hope for free stuff, or to miraculously develop a whole other personality that allows me to thrive in these circumstances).

2. I have a new relatively regular job which is in French. It is a good brain stretching thing, having to write in French and distracts me from the fact that I have no other work and no money. Here, go and look, and give us some traffic even though, unless you live in Belgium it will not be of the slightest interest.

3. I have just made lemon curd and I am going to put it into the giant three layered lemon cake I have made for absolutely no reason. 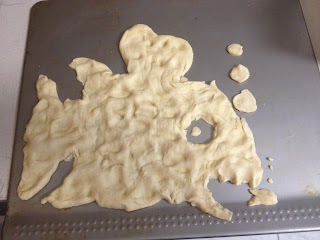 I asked L if he wanted to make his own pizza last night. He did. Yikes.

What of you, my friends? Mes amis? Tell me, while I swirl my waxed moustache.
Posted by Waffle at 19:05

I am the world's worst 'networker' (shudder), but I do find that a visit or two to the bar helps a lot when I am forced into doing it. I can't always remember much about it afterwards, but that's usually a blessing for all concerned.

Ooh I think I was supposed to go to that 'do'. But then I didn't. Great story, Paddy.

Your Culture site is very cute and colorful. I'll bookmark to practice reading en francais. And I even learned something -- I like the spaghetti/marshmallow tower idea for the next child gathering we host.

For some reason I think you might wasnt to see this from metafilter.com, http://www.metafilter.com/129696/Rupert-Everett-Really-Into-Dead-Victorian-Dreamboats

I fucking hate work parties. They are shit. Always. The only reason I can vaguely cope with them now in London is because I am so old that I know people. For the first ten years of my career I would walk in and walk out again LLGxx

Actually am new to your blog..but when read some of the articles really impressive..you have given a nice stuff..Thanks for sharing wonderful information..

Just back from a a week-long trip for work (shudder), which was truly the most enervating and exhausting thing I've done in quite a while, involving as it did quantities of time with other people and other similarly draining activities, such as making arrangements and then lightly sweating until said arrangements came off more or less successfully. Phew. Also the internet connections on said trip were dreadful.

Therefore it was a pleasant reward for the weary traveler to return to discover your recent entries. I am marshaling my forces with respect to the submission of expenses this very morning. As these is my first Belgian expense report, it is especially daunting.

Didier probably likes that coat because it takes a special three-sided knife to penetrate it.

Here's a business proposition, design a real estate app that tells you about the people in any given neighborhood, it would be lucrative. Dispensing with all the "it's a quiet street" crap would do wonders for the human condition. Maybe just a patented twat meter you could point at houses. Dark purple? Major twattage, thoroughly unaware of the 21st century. Light blue? Someone 'might' have half a brain. Pawn the details off on F, quick, before he goes back to electronics.

Are shop opening parties a thing? Clearly I am missing out. I would like to be invited to a party where there is a watermelon lucky dip.

What have I done? Um. I made three recipes out of the Delhaize magazine, ostensibly to practice my French, but in reality I just looked at the pictures and guessed. I highly recommend the apple and salted butter caramel compote. It has apples in, and is therefore a health food.

Don't know where to begin so just summarize that highpoint of the week was getting lost looking for a temple. Then we found another. On the way back I bought a badminton set. And today I was asked to be photographed with a very crooked-toothed Chinese lady who probably hadn't encountered very many hefty Scandinavians before. Then I bought a wrap from a man on the street. I think the crunchy things inside were chicken skins. Not sure though.

Oh my life is so . . . quotidienne compared to yours! I loved your site, it ties in with my periodic "you must use your rusty French more" exhortation to self I expecially liked les-meilleurs-gins-du-moment-et-leurs-meilleurs-cocktails?