I need (yes 'need' is a relative concept, but nevertheless) new boots. I cannot afford new boots. My old ones are completely, irrevocably dead and falling apart along every seam and in the broken stump of one heel, a large stone has become immovably wedged, and it clunks with every step.

My Portrait of a Lady body cream has vanished. Just disappeared. No one is owning up. It has probably been used in an experiment.

Writing about cronuts and cheeseburger stuffed crust pizzas in French is an essentially ridiculous occupation doomed to failure (and not lucrative enough to pay for boots).

Thursday is riding day and today new horse Gecko (Gecko! Who calls a horse Gecko? Few creatures can be less reptilian than a sturdy horse with a crew cut) and I did JUMPING. Teeny tiny jumps, but jumps nevertheless. After a childhood and adolescence of nonchalant fearlessness, I ride as an adult in a state of permanent tension between intense joy and the very real terror of something awful happening. Jumping is like this, but ramped up a hundred times. I was breathing VERY heavily by the end, but it was basically brilliant. Here is Gecko looking totally unmoved by our exploits, as well he might, but I reckon we did ok: 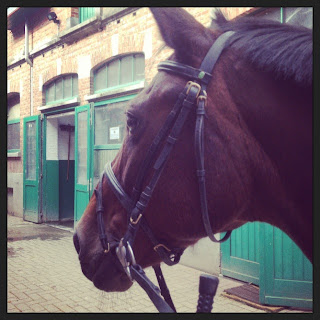 I am not at all brave in any other aspect of my life at the moment, so thank goodness there is this.

Also, Gecko lives next door to my favourite pair of ponies at the stables, one fine, delicate, exquisitely beautiful looking one (to whom I whispered today "I would have killed for you when I was ten") and one tiny, shaggy fat one with tiny stumpy legs. They both share one box because apparently they like company, and I got to spy on them and feed them carrots. 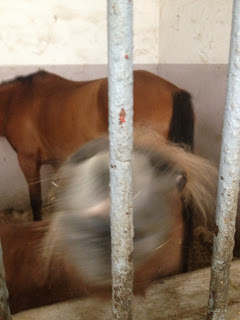 God, ponies. I live for the day when I'm old enough (and have enough money, sssssh) to be a toothless barmy old crone and wear one of those padded jackets full of hoofpicks and pony nuts and have a horse living in my kitchen, which will be a scene of unprecedented squalor and incontinent elderly sight hounds (I don't think this is quite the Fabulous Fashionista vibe, is it? I watched that, it was wonderful especially the utterly magnificent Baroness Trumpington).

Aspirations for old age: using illegal drugs (which could be legal by then) and telling people off using large words.

Oh, tiny ponies are such heaven. Particularly the stumpy, grumpy kind. Alas I shall probably be one of those mad cat ladies, living buried beneath old newspapers and mounds of cat iscuits, surrounded by my dozens of feline friends, one of whom will inexplicably sport some kind of neckerchief...oh, and there will be books too. Lots of books. And, on good days, cake. One can but dream, eh?

Apparently once you've been a Professor you get to keep the term as a courtesy for life. More than the years of hard work and needing to be clever bit, I long to be referred to as 'the Professor' as I drink gin and cackle, in emulation of a wonderful old woman (who had been Professor of Old Norse or something) who used to do the same in the pub I once worked in.

Essentially then, you are planning to be Jilly Cooper in your old age. A fine ambition and one I share wholeheartedly. I look forward to bumping into you in the M&S Classics padded gilet department.

In my old age, I'll be a brilliant gardner and have a cat and a dog, bee hives, chickens, goats, and my very own donkey. I'll wear ankle length skirts and shabby cardigans and I won't care what people think of me.

I will have a pug and bright pink lipstick. I will care even less than I do now what people think of me.

Individual connectors would be protected with silicone seals. But as with many of Apple’s patent and inventions, it’s unknown if or when it plans to use the invention in its future iPhones.