Seven Reasons I Should Be The New Queen of Belgium

Tonight Albert II King of the Belgians has abdicated in favour of his son Philippe who is inconsiderately not called either Albert or Leopold, which I think he will find is a big mistake (has no one taught these people about brand recognition?). 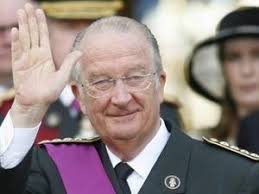 If only he could have chosen his younger son Prince Laurent, who is a bit like one of those 18th-century lunatics you read about sometimes who ride bears and make their horses drink port and hunt their own children (do follow that link if you like those kinds of stories). He is like a Belgian Boris Johnson, a simultaneously hilarious and terrifying oaf, always getting into amusing scrapes by getting the Army to build his house or going on unauthorised trips to the Congo. We wouldn't get bored with Laurent, though he might very well sell Belgium to a Nigerian spammer.

After all the free beer and extra holidays that will surely be coming our way in the next few weeks, I would like to throw my hat into the ring as alternative sovereign, because in 2013, in an enlightened democracy like Belgium, surely primogeniture is a bit, eh, old news? A bit retro? Let's run this thing like modern civilisations do and elect a new monarch via a TV TALENT CONTENT AND RIGGED PHONE VOTE. 'Rex Factor' suggests Berlaymonster, or 'Who Wants to be a Belgian Heir'.

Failing this, here is my manifesto for royal elevation:

2. I can describe a house in Dutch, thus proving my amazing multilingual credentials and making me a useful tour guide. A palace shouldn't be too much more difficult, I'll just add in a few more 'verdiepings' and 'kamers'.

3. I am really good at sitting still for long boring ceremonial occasions thanks to my many years of training at hour-long silent meeting at Quaker school.

4. Willing to change my name to 'Leopold'. Leopold Beddington Saxe-Gotha IV. Yeah. It has a ring.

6. Willingness to reinstate the old system of giving people a driving licence as a royal gift on their 18th birthday without any form of testing. It can't make road safety any worse than it is now.

7. I am already feckless, spendthrift and functionally unemployable, so will fit right in.

I am stopping at seven because I reckon I need to get my candidature in early to maximise my chances. Would you like to be King or Queen of the Belgians? What qualities would you bring to the role?
Posted by Waffle at 18:38

You should obviously be doing the Fabiola wig ANYWAY *tsk*

1. My enthusiasm for fries with little dipping sauces cannot possibly be overstated.

2. Family is originally from another linguistically complex country (Switzerland), so feel I have a kinship with the Belgian people.

4. Once crowned, determined to try very hard not to laugh at the word "Walloon" whenever I see/hear it.

5. Would have no problem amassing collection of Delvaux handbags, if so called by my country.

Nearly forgot: I, TOO, am already "feckless, spendthrift and functionally unemployable!"

I suppose you do know why Prince Laurent can't be king ever - he ain't the son of Albert. That's probably why Philippe and Astrid have been told to litter the palace with offspring, to put Laurent as far down on the list as possible.

Please accept my condolences on your new King. Hopefully once they read your qualifications they will depose this guy in favor of you. However, I wouldn't hold my breath. He's got a uniform and everything. But this dude already looks terribly sad and any bad news might send him over the edge. You might work that angle.

BTW, could we get a new mournful dog picture? This one is extremely mournful but I'm all mourned out for it and need a new excuse for medication.

It's so heartwarming to see the next generation take the rei(g)ns. Now it's their responsibility to promote local trades, such as trance music in these parts (Acid House of Orange). And speaking of major exports, what better way to fuel the festivities than with ecstasy? This was right before they escaped over the Alps to Switzerland.

Er... can't claim any affinity wiht horses... but Belgium was the first foreigh country I set foot in (I was 4, and my dad was transporting us all to Spain in a brand new VW caravette as part of some hair-brained and ultimately fruitless business plan possibly involving Alicante real estate, the details are shrouded in mystery but six months later we were back home and living in a rented flat in Newcastle's West End)... also I still have my Espana 82 Panini World Cup sticker book containing a fully completed 'Belgigue/Belgie' page featuring stern-faced images of the entire national squad resplendent in their red and yellow outfits, and I can still remember some of their names such as Jan Cuelemans and... er, Jan Cuelemans yes that was him. Is that good enough? Pencil me in for fifteenth in line, maybe? Court Jester? Second attendant to the King's hairpiece?

I can't be Queen of Belgiania because I am American and we do not believe in monarchies (REMEMBER? Ha!). Your new king looks suspiciously like Steven Spielberg. Therefore, I will vote for you for Queen because you have made it your life's work to spread cultural knowledge of your realm around the world. Will they give you a big sparkly dress and tall crown like Glinda, the Good Witch? That's the only way I would ever agree to be Queen of anything.

I didn't even know that there had been a spot of baton-passing by the Royals in Belgium.

Truthfully, I think the glamorous Dutch newbies have rather stolen Belgium's thunder.

Also, while we're on the subject of truth: I didn't know that Belgium even HAD a Royal family.

Oh Waffle, I am so happy you chose to comment on the latest Belgy political event. Throwing your hat, er, wig, into the fray is frosting on the cupcake. Merely emulate the strategy of the former Queen Beatrix (Dutch skills unnecessary) by claiming at once a personal image SIGNATURE (blue eyeshadow is taken and retired, to much relief). We wait for it. We will vote.

I would like to be considered for the post due to my tireless dedication to, and support for, local industry (Pierre Marcolini). If elected (crowned?) I would immediately demand the clean up of the metro stations, paying workers in either frites or frites. My King would like the Witloof banned; as a gracious monarch I would allow them to roam freely across the land, undisturbed.

Apple is also toying around with ways to waterproof future iPhones, according to a patent application published by the U.S. Patent and Trademark Office. Apple’s invention coats device internals components with a hydrophobic layer to protect them from moisture, instead of sealing it entirely from the outside.

Great content. I really appreciate your efforts. Thanks for sharing Mink Blankets

Thanks for sharing this .. Please check out these links that is related to the psl 2020 schedule, updates, news and more.
Here you can find the latest updates and the updated schedule, news, fixtures, and the other teams and squad information.
Pakistan super league is the biggest event that will be happening in february 2020 in pakistan.
Sportszilla provides you the latest information about the psl 2020 teams squad the captains names, and the other points tables and the other players category list.