The least predictable hobby yet

I had one of those phases of being utterly delighted by my children this weekend, which hubris is usually a precursor to a phase of extravagantly bad behaviour on their part. Also, it's usually a reflection of having achieved absolutely nothing in a given week other than managing to keep them alive and thus being anxious to celebrate that fact. Nevertheless, let me record it for posterity and in order to tempt fate even more comprehensively.

Of all the things I expected my children to get into, I think sewing was fairly low down the list. Probably well after 'arson' (F has dabbled, admittedly) and 'shoplifting'. It's a distinct improvement on the blue gel ant farm-slash-morgue and the kitchen based science experiments involving all the bicarb in the world. 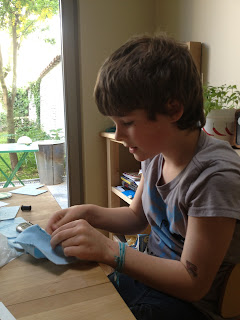 I can't really sew myself, beyond putting buttons back on and occasionally sewing their pockets back onto their coats when they fill them to the brim with crap (F explained that he does this because when they are asked to each pick up five pieces of rubbish in the schoolyard, he can just get five out of his pocket, which is resourceful, if immoral). It is all Blue Peter's fault. They have developed a new passion for Blue Peter and all the multitude of tantalising craft activities demonstrated therein. Last week we mummified oranges. I'm not complaining, exactly, it's all good constructive stuff, though I suspect the 'organ removal' for the orange on the left was not quite as comprehensive as it needed to be. There is seepage. 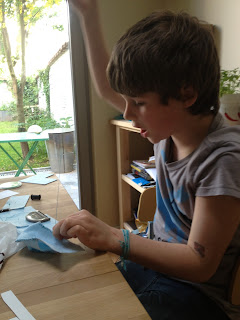 It's not tidy, but nothing they do is. 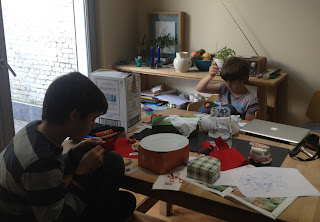 We spent all of Saturday afternoon quite peacefully like this, sitting at the kitchen table, sewing, like something out of the nineteenth century but with more potent glue. Mainly I threaded needles and did knots. My assistance in all other areas was swiftly dismissed. It took them about 15 minutes to get better than me anyway. 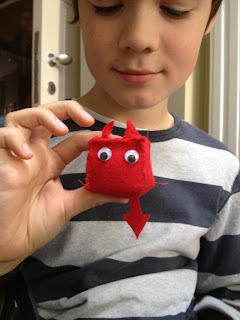 The devil was wholly designed and executed without any input on my part at all, and resized down to a miniature version from the Blue Peter template, also without any input, except ironing the fold on the horns (melted felt on your iron? Yes indeed). 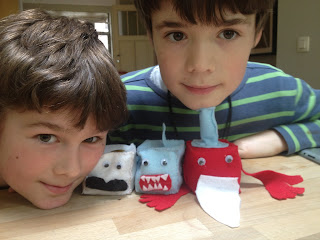 I'm not entirely sure who this lot are. The one in the middle is a shark. I think the others are a ZZ Top tribute band.

Apart from that, as foreshadowed in the first paragraph, I had a week of utter losership and failed to get anything constructive done. Tally:

- 1 blissful hour with Noblesse the horse who is happily recovered from her gammy leg (I was slightly worried I might turn up one day and she'd just be gone, sent off to be made into lasagne or something, poor old lady)

- 24 plays of Step (I have booked to go to a festival JUST so I can go and see Vampire Weekend again this summer. I'm not at all convinced I like any of the other acts. Go on, tell me who else I should see).

- 32 plays of F's violin accompaniment, only for the concert to be cancelled the night before

- 1 hairdresser's appointment acquired for next Tuesday, thank the baby Nathan. I have tried the new un-cut wig on. It is very dark and luxuriant. I have high hopes that for a short while I will not look like myself at ALL. I fear I will instead look like an Apprentice candidate. Hopefully not Alex with the Vulcan eyebrows.

1 great spotted woodpecker sighted in garden! (This would not have merited an exclamation mark in any previous year, but now I am old enough to really really care about birds and I don't even care)

8 detailed fantasies about going to live on a deserted Greek island with some goats, followed by 8 memories of this conversation.


Give me a tally of your week in the comments, if you are so inclined.

How beautiful are your boys? Very, that's how. Such heartbreakers they're going to be...

My week included a surprise! visit to A&E - not for me, I hasten to add, but for my elderly stepfather who, it transpires, actually had a proper, bona fide 'funny turn', like what they had in the 1950s. I had to drive my mother behind the ambulance. Old age is not for the faint hearted.

Re. the festival - go see Sigur Ros. You'll like them. Probably. If you like wistful, ethereal electronic dance music from Iceland. Which we do. They wrote this - https://www.youtube.com/watch?v=mAqJ0R-EkZg - which makes everyone cry...

Just saw Vampire Weekend in Boston and will see again in Brooklyn in the fall. Unfortunately I do not know any of these other artists, but I'm hardly the Euro artist person.

Boys who can sew little monsters are incorrigibly adorable.

Both The National and Sigur Ros are playing, who are both utterly jaw-dropping live

My list:
-One newly unemployed husband
-One newly bald and beardless husband, who did not clean the bathroom after his home haircut (not sure if this hair removal business was a mourning ritual or because it will be 100+ F here very soon)
-One extraordinarily hungover husband, filling out online job applications on Sunday morning
(All of the above are the same person, obviously; otherwise I would be laying in supplies for a triple homicide)
-One dodgy left knee that will need to be MRI'd and evaluated for possible surgery
-One work trip to Indianapolis (5 hour drive) in a mini van crammed with 5 other people successfully avoided due to dodgy knee and unemployed husband
-One massive sugar ant infestation (thank the Lord for Terro traps)
-One adorable but monstrously crabby teething toddler who is obsessed with eating bananas
-Zero bananas left in the house.

Love the pictures of your boys! I've been reading you a while and they are getting! So! BIG! Congrats :)

I second both the seeing of Sigur Ros and the beautifulness of boys. Also at the risk of sounding like a hipster who's been living under a rock for the past few years, I used to love Bloc Party (electro with lovely vocals) and Black Rebel Motorcycle Club (dirty dirty garage band whose members dress in leathers oh be still my 16-year-old heart). The reason I say 'used to love' is that I haven't heard either for ages and wouldn't want to be recommending a band that might have vastly changed track. Altho I bet BRMC are still worth an ogle...

F and L's new talent is wonderful. There are two boys (men) at my knitting club who are lovely, but people do look askance. Could you make a sweatshop from the boys and become filthy rich?

For the first two days of last week I wrote two thirds of The Final Chapter. For the last five days of last week I failed to write the last third, with much wailing and sobbing and general despair. But I did have an excellent pub lunch on Sunday, so a pretty good week all in all.

Well I woke up to the Pink-eye inflamation straigth from Hades's bottemless pit on Tuesday. This is particullary enjoyable because I have a wedding on Saturday. On the other it does give me a good excuse to avoid the cameras.

Sigur Ros is a no-brainer.

Crafting, it's like foraging for making happy quiet primates.

My week includes one child at camp 100 miles away. I am worrying less than last year. Child the younger is at half day art classes. This keeps me busy with chauffeuring as they don't start until an hour after my work start. She's enjoying the quiet while her super chatty sister is out of town.

I have to say that your blog is hilarious. I'm dying over the inexpertly-embalmed orange.

45 baby habanero pepper plants that I am the unwilling guardian of.

4 earwigs. The season has begun. Next week, this tally will be 300.

My Tuesday involved 3 separate swimming lessons/clubs, 2 optician appts, 3 dentist appts, 3 micro scooters at all of the above, two pieces of appalling parking and a book club evening where we talked more about the film of the book than the book and two of us frozen off. Today has involved about 8 instances of hurling abuse at emails from my clients. Now on 2nd glass of wine and 2nd slice of watermelon so week gradually looking up.

Sigurd Ros and The National, who are amazing live.

Well the week is only half over but here goes:
2 illegal sandwiches eaten (defying low-carb diet)
1 half day of work because of feeling poorly
1 four-hour "nap" taken
Lots of work done despite above
1 cashmere sweater that was not in The Budget purchased (even though it's June)
Dinner and drinks with couple we really need to see more than once a year

I love children focusing on projects. And I am impressed with the square creatures. I do some sewing and square stuff is hard!

J: Be gentle with newly bald and unemployed husband. I had one of those for six months and he was FREAKED OUT. Put up with the weirdness and constantly remind him you're in it together.

My hobby this week consisted of shelling 2 large sacks of almost mummified walnuts, but that kept me from picking the hairs on my chin, so all good really.

Richard Hawley (Talented Man)
The Script (Good looking Irish trio, great lyrics)
Of Monsters and Men (Icelandic or Finish I think, a group of Bjorks on speed)
Bastille (just hearing them on the radio a lot here)
Stereophonics (Welsh band from the 90's)
The Lumineers (Singalong anthem type music)

You'll be able to understand the words of the songs for most of the above bands (if you like music you can sing along to) but the Script and Richard Hawley would be my definite choices.

On a different note, I love reading your blog. I can't remember now how I found it, but when I did I sat and read back to the beginning. It took me a week or so, but I howled with laughter for most of it. My husband worked in Brussels for 4 years and so much of what you write resonated with me, especially the hairdresser's window. Four years of what should have been European culture and history and all I can remember is the bad window displays. Oh and the world's smallest Gothic window somewhere above a canal in Bruges...

Oh, thank you Smiler, that is incredibly lovely of you. I am only going to the Thursday at the festival, so choices quite limited. Also, all the Sigur Ros people, I hear you, I hear you, and I know that you are right, but I am allergic.

Oh waffle, those cubimals are exquisite.( as are children) Recommend Laura Mvula.

All I have acheived this week is the wanton distruction of elventy million ground elder plants and a returned item I sold on ebay(the outrage).
Will you be visiting Re ( Ile de) this summer? If so see you there for some trouser donkey love.

Talk about feeling like a loser, we've had a mouse that's been tormenting us for THREE weeks. Do you think I could commission a monster from your kids to scare him way?

I LOVE your 21st century parlour vibe, it's like Sense and Sensibility with boys. In Belgium.
I don't have a list, my week is just dominated by one endless googling of kidney failure linked to over eating chocolate for 3 years. Google is telling me it's a thing. And I have it.

very helpful information, thank you very much this can be very useful for us all
vitamin anak untuk meningkatkan nafsu makan