I have little to relate but that has rarely stopped me, has it?

Chapter 10 is entitled "In which we ask ourselves what kind of dad he is", which is topical. I must have read, rather wearily, six or seven think pieces on whether fatherhood is being devalued or misrepresented this weekend. Consider Dickens, opinion writers! 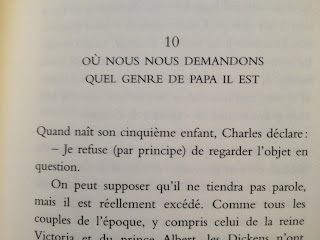 When Charles's fifth child was born he declared "I refuse (on principle) to look at the object in question".

There has also been some upleasantness involving liaisons with actresses, inevitably. Since the recent Horrible Histories song (amazing, do watch it), Charles Dickens and Morrissey are inextricably linked in my brain, so I am finding this difficult to comprehend.

2. F is still living in a medium sized cardboard box, in which I am instructed to shut him every night before he goes to bed (he does go to bed in an actual bed afterwards, but the box is a necessary intermediate stage). He is also pursuing a solo project I am not wholly clear on involving covering eggs in papier mâché and an unholy mess.

3. Oscar appears to be moonlighting for the Guardian. We spent some time trying to adjust him into that pose and take a picture, but failed. He looked less dynamic and speedy, more puzzled and faintly ashamed, ie. much as usual.

4.  It's exam season in Belgium as in much of the rest of the world. Mercifully the children seem wholly indifferent to the whole business, which I prefer to neurotic. Without any conscious desire for their or my betterment, I seem nevertheless to be absorbing an unfortunate amount of primary school knowledge for which I have no earthly need. The precious few brain cells I have left are now taken up with the following:

- the names and capitals of the Belgian provinces of which I consider there are a quite excessive number.

(conceivably useful if there were a Belgian citizenship test and I wanted to take it, neither of these things is true)

- the name and course of various Belgian rivers, no that's a lie, they are far too difficult. I just know their names. Vaguely.

- How to describe a house that is not mine in Dutch. Een verdieping, een benederverdieping, een zolder en een kelder. Or alternatively debate the relative merits and expense of different types of meat "mar rundsvlees, kalvsvlees en lamsvlees zijn wel duur. Dan nemen we varkensvlees!". I do not vouch remotely for the spellings. We have only done the oral exam so far. I can, however, spell "zenuwachtig", which I believe, appropriately enough, may mean 'anxious'.

- a lot of ludicrous details about the sex lives and other private doings of bees that is none of my business. Let bees be bees, Belgium.

- The water cycle in mind-numbing repetitive detail x 2. God. How many times do you have to learn the following in a school career?

(i) The Water Cycle
(ii) The Dinosaurs
(iii) The Egyptians

Is there some kind of universal law that these subjects must be taught twice yearly between the ages of 4 and 16? It would appear so. We are raising a generation who will be absolutely fucking brilliant on an extinct race of giant angry lizards and some long-defunct people who liked cats a lot and walked sideways. The water cycle, I concede, may be of some use, but barring some catastrophic time travel accident in the near future, the others are perhaps less pressing.

I cannot wait for the next week to be over so I can jettison this rubbish. I find myself gently muttering Dutch dialogue to myself ("kijk, dit is een tekening von onze huis") as I walk around the house picking up people's pants. Presumably this stuff is replacing useful stuff like knowing how on earth to proceed with my fucked up career. I am at a loss with this subject currently. I have concluded that I am massively temperamentally unsuited to freelancing (shy, solitary, atrocious at networking, not overburdened with brilliant ideas or confidence, fear of telephone, financially incompetent). But then, I do not know how to get a job any longer. I realise I am basically waiting for a giant mythical eagle to come and carry me away to a magical land of plenty. It is taking a while.

5. Speaking of matters vaguely ornithological, meet my new friend who I encountered in Waterloo this weekend (a frustrating attempt to see some jolly Napoleonic reenactment which ended with us examining this fine specimen in McDonalds car park and me refusing to buy an €8 thumbnail sized jar of Waterloo battlefield soil, the perfect gift for the utter bastard in your life). I was unable to buy him, sadly, but I suspect he might be back. He's something of a minority taste. 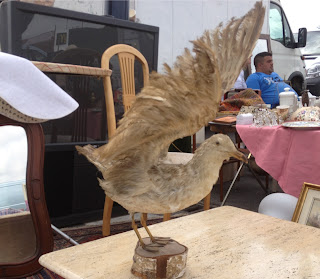 On a similar subject this made me laugh and laugh today. The vaporised bunny! That ... bird! Brilliant.

Other tempting items in the Ukkel area, this noble whippet aviator cushion: 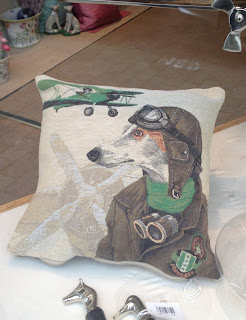 And the prospect of a visit from MJTonyJackson, Ukkel's foremost Michael Jackson imitator. Do admit. Shall we perhaps club together and hire him? 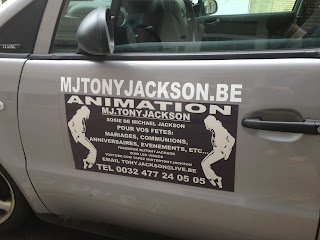 That is all, really. Tell me your news, for I am bored and lonely and waiting for a giant legendary bird that I am beginning to suspect may never arrive.
Posted by Waffle at 21:37

I have news!! BUT... I'm not allowed to tell it yet. Actually, that's not true, but I know that if I tell it it won't happen, because I fucking jinx myself all the time, so this time I am remaining schtum. In *other* news, my baby sister is knocked up, and UNMARRIED, both of which are inconceivable (excuse the pun) in my head because surely she is UNMARRIED and only 9 years old? BUt I guess she's not really 9 years old, but yes certainly UNMARRIED... Finally in the news stakes, I am heading to Ireland on friday and said sibling, large with child, has purveyed a bar of the finest, limited edition, crisp chocolate (as in cheese and onion crisps crisp, not thin delicate crisp) for me, which now that I think about it, is possibly even more exciting than my unmentionable news.
I love that dog cushion btw.

Morrisey Dickens is the BEST THING EVER!!!

When the eagle comes, point him my way after he's dropped you off, would you? He might have friends on the AHRC funding board. Failing that, a cardboard box of one's own sounds good.

I love your distinguishing features of Belgokings. Please write us a short history of the monarchy, you do it so well!

And the water cycle will almost certainly return when they're in secondary school. There's a comic book called 'Great Lies to tell to Small Kids' in which one reads something like 'pay attention in school when they tell you about ox-bow lakes - they'll be really important in later life'...!

How to describe a house that is not mine in Dutch, that's the best phrase I've heard all week, including 4 Things You'll Feel Right Before a Heart Attack.

Speaking of relative expense, I think the term 'peper duur' exists--Veruca Salt is called Veruca Peper, at any rate.

No news, haven't even gotten around to having one of those enamel signs made for the front door that says, "Put it in writing"

My "career" is even more f**ked up, I'm nearly 40, have a useless degree and no career prospects whatsoever (apart from maybe as a cleaning lady or a "barista"), and my only son has special needs . So, as you can see, things CAN be worse;-)

News:I was abducted by aliens and the result is that my children are going to ballet camp this summer.
AND that I'll be chaperoning a field trip to the swimming pool tomorrow.
This will probably be the last you ever hear from me,since a morning spend with 25 toddlers in a swimming pool is bound to make me suicidal.

I particularly like that the vapourised rabbit was atop Goodnight Moon. News: my son's hair is now so long that the sinister hair styling man in the shopping centre said he would make him look like a princess.

I don't know how they do it in Belgium but here in Alabama we have an election for school superintendent. You should run! Your grasp of what is and is not important in the matter of educating our children is unequaled. I think viewing one picture of the wall in any old Egyptian tomb should suffice as educated in that subject. If the Belgians won't accept you as super, then come to America! We might not be able to get you a super's job but a teaching position shouldn't be problem. Several of our teachers have admitted publicly they cheated on their qualification exam. Likely they left their pics in their other pants.

Isn't that Dickens/Morrissey video just brilliant. me and Frankie were just watching it the other day, he wouldn't believe it was anyhing to do with the Smiths, and indeed denied all knowledge of Stretford's finest gift to popular culture, so I marched him straight off to YouTube and showed him 'This Charming Man'. Got to work on that boy's musical education.
And F, living in a cardboard box and carrying out mysterious and unspeakable experiments with eggshells... that sounds exactly like our Frankie also (although his experiments tend to involve making strange concoctions out of anything he can get his hands on- washing up liquid, olive oil, a strawberry) and then freezing them for several days).
News: I am slightly hungover having partaken of rather more drink than food at the Levenshulme food and drink festival, there was pale ale on tap at a positively Belgian 6.8%.. the boy is away at his Liverpool Grandmas for the afternoon, we are sugarsoaping and scrubbing the house to within an inch of its life, and Charlotte met an elderly ex-arts student lady on the train back from Lime Street who claimed to be the wife of Ringo Starr's cousin. More to follow, as we have it.

Do admit! Off to retrieve my copy of 'Pursuit of love' for an immediate re-read...

The most enjoyable thing coming up in my life is the forthcoming blog party. No idea how I'm going to be ready for it, mind you. I faffed around most of today and I haven't another whole free day.

I still remember the bits of Dutch I learned when I was five, mostly days of the week and counting, especially 88 and 888. I've never managed to learn another word since, which seems to indicate I peaked over half a century ago.

Oh I so hear you on the career thing. So hear you. X