This is just a tiny post because God, it's been ages and it is a terribly poor show. Speaking of poor shows, I recall I had promised you details of the school fête. It has now faded to a merciful blur, much in the manner of this photo, where the Manneken Pis appears to be micturating on the heads of the 5ème primaire as they reenact the Battle of Waterloo. 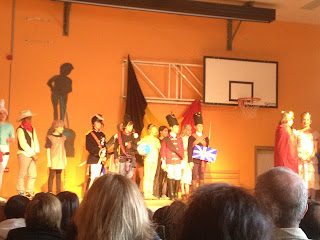 Mine is in the middle, in the red jacket. I was VERY PROUD of that all-expense-spared outfit until I saw Napoleon's lieutenant who was wholly superior in every way. Next to Wellington, in yellow, stands the Lion of Waterloo holding an inflatable beachball, which I believe represents the world, thus:

Also visible: To the far left, Lucky Luke, the cartoon cowboy and half of one Smurf. To the right, possibly Charlemagne. Or, hmm. Maybe Charles V? I forget. There were several tepid plastic beakers of white wine in the Siberian schoolyard, where we huddled together for warmth, like penguins. It was late. It all got a bit fuzzy. Shortly after this photo was taken, the whole cast started dancing to ABBA's Waterloo, as one might hope. As we left, the class above was just starting a hearty rendition of "chef, une petite bière on a soif" which is the essential accompaniment to all such festivities (click that link at your peril. Actually, no, go and watch it. It, and its intepreter "Le Grand Jojo" - who is, I learn to my astonishment,  not merely still alive but going strong and signed to Universal - are an essential facet of your Belgian cultural education. Yes you do need one. It's pub quiz dynamite).

I do not have any better photographs, which is probably a good thing. I do not have any pictures at all of F and his class performing their extensive Jacques Brel medley. He told us very confidently that he would be on the left hand side of the stage, and then was on the far right and barely visible to the naked eye. If you craned your neck in front of twenty seven camcorders and squinted you could occasionally see him Very Clearly Enunciating in the back row (it's the opera training, darling). It was very moving nevertheless.

I also (i) did not contribute any baked goods; (ii) avoided any unseemly fights over the duck fishing stall by not volunteering my services; and (iii) won a small wooden spinning top in the raffle, which is better than the free with purchase purple fluffy Milka slippers of two years ago. I also managed to sneak away for a considerable part of the middle of the day, so I consider this a highly satisfactory fête experience.

In other news I have:

- interrupted a pickpocket in flagrante delicto with his actual hand in my actual pocket ("What was he after?" asked M, cruelly. "Dog poo bags? Lint? Twigs?")! Today! I greeted this with British embarrassment and a slightly huffy stare, which has totally taught him.

- tolerated about 73 Belgian bank holidays. There are more to come. Pray for my mortal soul, with especial mention for a dispensation from ever playing Battleships again, please.

- Made a fairly sub-standard cake for my enormous child's 11th birthday: 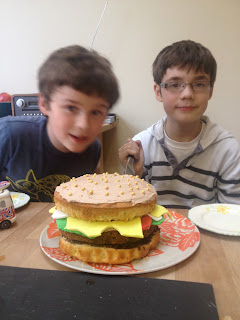 (High quality photobombing there from the other one)

He actually asked for a watermelon but I just .. couldn't. Too much going on, not enough red and green colouring. I'm not proud.

- Visited the Scary Bat Caves on one of the innumerable bank holidays and stroked a bat's claw and a lemur's tail. 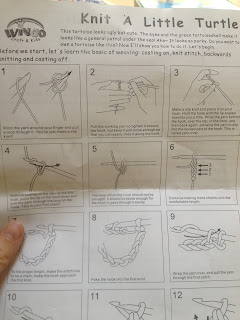 Which I believe to be Google Translated from Korean.

"That" opined someone "Is the most complicated way of describing a slipknot I have ever seen" and I can only concur.

"No YOU knit a little turtle! And what on earth do you think a 'patrol under the sea' is anyway? WHO PATROLS UNDER THE SEA? LOBSTERS. THAT IS WHO, NOT TURTLES"

"'To the proper length make the stitch line to be a chain?' YOU ARE ON CRACK".

All the while accompanied with angry flailing at green wool. It was a bad scene.  Can you crochet? How do you ever move on from "making some knot things in a line" to "attaching the knots to each other to form a shape"? Can you explain it without recourse to Google Translate? I am all ears. Ears and cheap wool and the rage of total ignorance.

There is doubtless more to be discussed, but it is late and I am going to bed with the dread strains of "Chef une petite bière" chasing the last dribbles of sentience out of my brain.

The hamburger cake is BRILLIANT.

Also, I only know how to crochet a long, unending chain. My mother rather wisely gave me thick kitchen string with which to practice, which could be easily unknotted and actually used afterwards.

I concur - hamburger cake is BRILLIANT! What are the fillings made from?

On crochet. It is the devil's work. I knit quite well but have never mastered crochet (where does the needle go? Which hole? What the fuck is all this wool doing?) but was given THREE books on crochet for my birthday including very basic step-by-step that you're more than welcome to borrow. I hear YouTube is also good for instructional videos. I think it'd probably be worth it to have a little turtle.

This made me homesick. Yes, yes, something is very wrong, but hey, next year's fête choreography sorted, no? The world is your beachball.

Also, are you sure that wasn't a coot with its hand in your pocket, because that is precisely what they've been building their nests out of (suspicious).

Frau Antje - That would TOTALLY work. I am volunteering to do the choreography next year.

Sigh, crochet. Other problem: how do you say crochet hook in French, since 'hook' is 'crochet'? TOO HARD.

Hamburger cake is a triumph!

As for crochet, I have tried and failed spectacularly, I basically ended up with a string of knots. I watched YouTube tutorials but my hands would not do whatever voodoo the women on the videos were doing. Also I shouted at my husband for not being able to explain it to me, not that he's ever crocheted in his life, but that was irrelevant.

Try www.garnstudio.com for crochet instructions. They are without audio so no one will know how many thousand times you see the same one. There is one called "crochet - start" which sounds promising. I knit like a fiend but regard crochet as a hopeless ordeal. But small crochet animals do sound tempting. Bonne chance!

I am confused about the cowboy at the Battle of Waterloo, but your hamburger cake is excellent. I can knit, but crochet is beyond me.

I have very unpleasant memories of my mother trying to teach me how to crochet, although surely her memories of the event must be far worse.

Everything in Crochet hinges on something that sounds rather vulgar - you have to know which hole to put the stick into...

Trust me on this. I taught 11 yr olds how to make sweaters in after-school-group this way.

It is easier if I can show you, which I cannot.

Creation of a burger cake has far more scope than a watermelon anyhow, IMHO, and that one is awesome.

Crochet is a problem~usually they have you make a chain, then bend it back on itself into a loop (poke the hook through yr first chain loop and pull through another loop or two, then just go round again. hooking through an outside chain link each time. Make a new chain loop each time you go round. Which loop ends up to be vastly unimportant, just pick one and go for it.
L

Thank you for the description of the school fete -- and I even braved a few seconds of chef...on a soif -- so I feel refreshed and ready to face homeschooling again!

Love the cake! (Also curious about the construction of cheese, lettuce, ...)
I'm determined not to let my son see your blog (and cakes!) --on his 13th last week, he had to do with pan cake, canned icing, and 'decoration' of numeral candles that show his birthday in binary (mathematician father...). I'm sure he would have much rather had a slice of that hamburger!

Laughing! Oh, laughing. And comments just as brilliant (fuck is all this wool?!)

good computer or notebook computer please stick to the procedure check this site you employ it on your sensible mobile. vidmate video downloader nice.

good you simply just will need to start the data file and check this site The iphone app will download and afterward MSQRD Latest nice.

What is PNR Status and what does mean?

good any case sensitive and having sorting option too. open this site on following carved process to install Showbox on Android Products. ShowBox App Download nice.

good also includes all the presentations advertised on Viacom 18 channels open this site for us and permits persons to check out a motion Voot App Download nice.

good you will view it on the menu of your Android Smartphone. terrarium tv app download to see most recent HD flicks and also television shows.And nice.

good By using this fantastic tool you could organize imobdrodownload any kind of on-line streams from anywhere across the globe. best.

good does not enable the application to be available there. https://cinemaboxapkz.com will ask for update as well as inevitably convert right best.

It is terribly arduous to say once exactly ought to be compelled to cash your check. typically it's reaching to really hard to cash if it isn't official hours. That’s why we tend to tend to feel http://www.unitedcheckcashing.com you superabundant and twenty four hour check cashing services. it's really easy to finding us as we tend to tend to stand live at your city or nearest places.
24 hour check cashing

This information is very useful. thank you for sharing. and I will also share information about health through the website

This Tinder online dating site is far away from the differences of culture, creed, and races. Tinder Dating is a one of a kind type of websites which aims at diminishing the gap between the outdated and in trend style and passion love matching or matchmaking sites

I hope you love watching sports on your android, iOS, pc, & another device. Therefore, with sportsarefree xyz, you can view all the matches of nba, nhl, nfl, and more. Due to some reasons, sportsarefree xyz is down, so here is the sportsarefree.xyz alternative app for all the devices.