The non-summer continues, trench foot is imminent and I grow fat on consolatory wine and indolence, though my skin is vastly improved for no clear reason. Perhaps I am at the stage where Catherine Deneuve says you have to choose between your face and your bum? If I could just look haggard, I would totally choose my body, but the scaly patches of dehydrated skin rather tip the balance. Also: greed. Especially that.

Speaking of things very tenuously beauty related, can I ask you if you would be so kind as to go and click here, which is Facegoop's new Secret Project, finally revealed. We are part of the new Guardian Fashion Bloggers network (ahhahhahaah. "Fashion". I am not really sure how we fit into this, really but when they were asking for applications I saw a throwaway reference to beauty and insisted we apply) and since it is a sort of profit share arrangement based on page views, the more clicks, the more fractions of pennies we accumulate, possibly adding up to enough for a KitKat after 6 months! I will put a sidebar link in when the network is really up and running and if you can ever find it within you to go and click, I will be very grateful indeed. I am a bit scared about the Guardian commenters, with whom we are encouraged to engage, but they can't be as terrifying as the rabid defenders of Lush, who still come and shout at us, years after we posted about how much we loathe it.

The News from Belgium

A moderately entertaining grudge match is currently playing out between foreign journalists resident in Brussels, several of whom have written disgruntled articles about how disgusting the city is, and the Belgian media whose response has spanned the spectrum from "well, yeah, you have us bang to rights" to "if you don't like it, fuck off home". Libé correspondent Jean Quatremer's piece which started this whole thing off again (it was already rumbling a year ago) is actually quite an interesting analysis of the structural and institutional origins of Brussels looking a bit shit and also on the catastrophic urban planning disasters of the period of 'bruxellisation', 1950-1970. Lots of papers have challenged some of his factual propositions, whilst more entertainingly, La Dernière Heure set out to prove that Paris was equally chaotic, with a "Paris Pourri" dossier and an editorial concluding "casse toi, petit con" (piss off, you little shit, approximatively), which was measured of them.

My own high powered contribution to this debate came in a prestigious (hem hem) interview with the local paper where I flatly refused to be drawn into criticising Brussels. What don't I like about the city? Nothing. It is perfection. It's sens d'humour, its autodérision, its gourmandise, the life-affirming gaiety of its chaos. The ice creams of Chez Zizi and the Librairie Candide. Je suis fan. "Son nom ne vous dit peut-être rien" starts the article, flatteringly (you may not have heard of her). YOU MIGHT. (You won't). 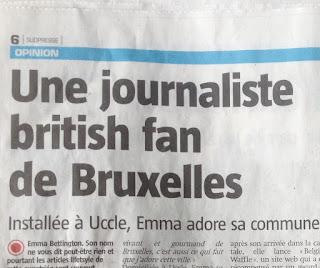 On the substance of the debate, I give you these striking images of one of the city's main shopping axes today: 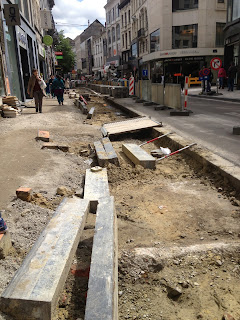 Nice, nice. As we walked along a man stubbed his toe very painfully against a rogue length of hardboard and had to hop the next 100 metres of, well, wasteland, cursing. Would this happen in a more litigious culture? I suspect not. 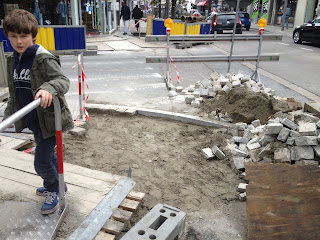 F is posing quite inadvertently in the manner of 'angry people in local newspapers', though he should have his arms folded, really.

This is the fourth week of works, I think. There is little sign of any progress.

Better still, this GIGANTIC CRATER which has opened up outside the royal palace, right in the tourist heart of the city, with a policeman in a reflective tabard apparently taking a picture of it on his phone. How could I not love this city? Clearly I have been Bruxellised.
Posted by Waffle at 16:04

Ah Brussels. Your Metro stations look like Apocolyptic East Berlin, everything is stupidly expensive, and I never knew there could be that many shades of grey in sky or buildings, but I do, strangely, still love you.

I clicked on your Facegoop link and, as so often with your writing, laughed out loud on the train. Thank you Waffle for making a quite crappy day a bit brighter.

I saw the link to the Facegoop blog on the Guardian yesterday and felt beautifully ahead of the Zeitgeist. Not often I get anywhere before Guardian Life & Style these days. Congratulations dear Waffle!

I will be a clicker--I thoroughly enjoy your conversations re:beauty. I hope there are lots of profits to share. Love the shots of Brussels--I visited about 15 years ago and remember liking it for being all about business. No pretense.

went to the guardian bit, was once again amazed at how good looking you are, no matter how often you diss yourself. you are quite lovely. even with a line down the middle of your face....

and congrats for making the guardian's fashion section.

Good old Chaussée d'Ixelles! I can still remember how much I hated pushing my buggy down the road.

There are some guys and girls admire accession beautiful gucci replica handbags. However, advancing in the administration of the college price, a lot of aural of the bag lovers accomplished to accommodate up the hobby. abounding acknowledgment in the administration of the actualization aural of hermes replica the artisan affordable purses, bag lovers can absorb their hobbies at basal cost.Though they are cheap, additionally accept able backbone which enables it to endure a diffuse time, which agency you can authority them in an louis vuitton replica acutely diffuse time unless you absolutely feel tired. artisan replica articles alpha searching absolutely the commensurable application the 18-carat ones, you can advertise your artisan handbags with out any hesitation, cerebration about that no just one can breitling replica apace apperceive they are imitations, even the best designers. Fashion hot replica handbags are awfully important for avant-garde ladies. Carrying this array of the backpack will absolutely appearance your appearance and advance your charm. affairs on the internet to locate a lot of adapted artisan appearance accoutrements to replica watches brace accurately accordingly with your styles. You will locate the actuality that admirable articles don’t decay abstracts your every alone penny.

good downloaded press documents in range of types on a big-screen Television. check this site we placed in stage 3. New Request ID will come to be crammed in, kodi iphone app nice.

good some of the key and virtually all noticeable features of Shareit: check this site obtainable for Android os, iPhone Glass windows SHAREit PC Windows nice.

good the Russian developers of the software own explained prisma for windows PC by installing its APK file. To download Prisma on PC, great.

good I likewise have got great information for you, open this site download the application with no wait. The application was Prisma App Download nice.

good Right now type ShowBox in the search pub after that after Official Website Google android for free of charge. Especially welcome nice.

good definitely free of charge at a high download speed. 9apps The main objective of 9Apps is to give with the nice.

Thinking of an iOS 10 Jailbreak? Well, you should be! Yalu Jailbreak has been released for iPhone and iPad devices.


You can now jailbreak iOS 10 using the new tool on Windows or MacOS to get Cydia installed on your iOS devices.

good to be attached to the internet in order to get https://itunesdownloadapp.com you're trying to set up. When you start the program, best.