Oh, we are full of the joys of spring here in Ukkel. The icy winds whip my balding wig combover across my scaly forehead, the dog shit is frozen hard to the pavements, the children are variously vomiting and oozing profusely, I haven't taken off my thermal vest since November, or seen any of my own naked flesh apart from hands (a mercy).

Conversation with M this morning:

E: It was so cold on my way to buy a sandwich that I actually CRIED. Real tears.

M: Tell me about it.

E: Welcome to the Hotel Facepasta.

M: You are singing this to the tune of Hotel California, aren't you? I am.

E: Of course. I'm hoping to elaborate a whole set of Hotel Facepasta lyrics instead of doing what I'm actually supposed to be doing. You can check out any time you like.

M: BUT YOU CAN NEVER LEAVE.

Hello. I hope you haven't come here seeking anything in the way of description, because I have adjectival overload sickness, after three weeks of copywriting (many more still to come). I am taking a break because something in me has rebelled this afternoon and I cannot make my fingers type "spacious" or "elegant" again.

One of the copywriting jobs I am doing involves, as part of my role, chasing a number of hoteliers again and again until they read what I have written. It reminds me very much of a farcical six months I once spent in the property department of my Vast Law Jail, trying to sell some pubs. There were sixty pubs in total to sell, and they were split between me and another trainee. We were only the next in a very long line of fresh-faced legal idiots to try and sell the pubs, many of which had been passed hand to hand over a matter of years, still awaiting a consent from a head tenant, signature, payment or similar minutely idiotic (adjectives!) piece of bullshit. They were a particular crap set of pubs, mainly in depressed northern towns, in a poor state of repair and with dwindling income, sited near the local dump or the scene of some notorious atrocity or with complex litigious networks of shitty tenancies that were tangled like skeins of wool used in a weasel wool wrestling contest (no, I know that makes no sense), which was presumably why they had been assigned to a pair of idiots like Philip, the other trainee, and I.

Every day, we would settle down for a day of self-consciously dictating - we were FORCED to dictate, which we were informed was 'more efficient' - tediously repetitive (adjectives!) letters requesting permissions, and calling other lawyers in provincial firms to try, timidly, to request that they return the papers they had been holding hostage since 1978. There was one particularly mardy northern female lawyer we both had to call numerous times a week who delighted in being flatly obstructive, or bawling at us for things that had or had not been done by our predecessors, or pieces of paper lost in long-forgotten office moves in the 1960s. It was rapidly clear that she thought we were posh, clueless idiots, and she was most probably right. Philip and I became quite competitive in our shared adversity and when, occasionally, one or the other of us would manage to wrangle some kind of resolution to the troublesome easement or the unpaid service charge and would manage to dispose of a pub, we would run wildly into the other's office to seize the communal spreadsheet and gloat "THE RED LION SCUNTHORPE! GONE!". In contrast, there were particular pubs the mere mention of which was enough to send an unhappy frisson of dread round the whole department (I wish I could remember their names! I thought at the time they would be etched onto my psyche forever. Now I just recall that there was one with "Jolly" in the name that evoked the least jolly thoughts imaginable). Happy, if somewhat Dickensian, days. The dizzying, ecstatic sense of freedom I felt when I finally dictated my handover notes to whichever poor sap replaced me ("The deeds to the Ferret and Gluesniffer in Goole appear to be missing from the deeds envelope following an extensive search, perhaps you should query their whereabouts with Land Registry?") has rarely been bettered.  In conclusion, I am now doing the same kind of thing I did back then, but for about a tenth the money and with more adjectives. No one shouts at me this time round though, they just avoid my calls.

So there we go and here I am, with a shitty cold and terrible, terrible skin, a pint of sunflower oil spilled down my good Isabel Marant jeans (accidentally, rather than as a last-ditch attempt at hydration), pink eyes and a fairly foul temper. A great deal has doubtless happened since I last dragged my dessicated fingerclaws over these keys, including:

-  Easter weekend at my newly retired father's terrifying country retreat, Château Tetanus (dead creature count low, but particularly searing: 2 baby lambs in the barn with big HOLES in their tiny woolly sides, ah, the glory of spring). My father was nominally on Science King Duty until midnight on Sunday, so we kept teasing him with rumours of pandemics and natural disasters. In the event, everything was calm, and I even spent a surreal hour watching 'Cupcake Wars' with him, which is not something I ever expected to say (he was appalled by the whole sordid business, and particularly the pizza cupcakes with battered onion ring toppers, quite rightly).

- Fingers' birthday "boum" (Gangnam Style played a thousand times, marshmallows smeared all over the floor, a treasure hunt where I got distracted and forgot to put the treasure out, and some episodes of inexplicable weeping).

- My sister the Space Cadette acquiring a kitten called Vagina in Arabic and losing it in a cupboard.

- a lot of reading of books, many of them fantastic, which I hope to get around to writing about at some point, but you know, there are "sensuous textiles" and "stunning sea views" to bore on about. View here is mainly of of ice-scorched bare earth and seven vast pigeons squabbling over the last crumbs of my extra-large fat ball, but imagination is a wonderful thing.

- The mystifying Uccle car safety campaign which appears to involve putting a piece of paper on car windscreens that says "OI! YOUR CAR IS UNLOCKED! SOMEONE MIGHT STEAL IT!": 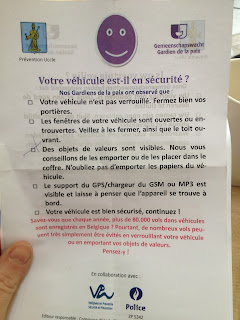 Which I can't see any problem with, no, absolutely not.

I will try not to be gone for another three weeks. Here, have some lambs that aren't dead: 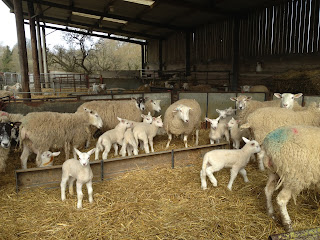 Nice to have you back.

Sorry. I couldn't help myself. I have been pureeing fucking vegetables for FOUR HOURS and have lost what little of my mind was left. I got a teeny bit excited for a moment when I thought we might have actually worked in the same Vast Law Jail,but my six months was spent trying to sell crummy motorway restaurants, not crummy pubs. You left out the bit about skipping down to Ye Olde Legal Wine Bar at 530pm PROMPT every Friday to swill pints of fermented grape piss, rendering you unable to decide the following morning whether you really did see that revolting old halitosis-ridden partner getting off with his vomiting secretary whose boobtube had ridden up or if it was all a horrible grape-piss induced night terror. Happy days indeed.

Oh thanks a fucking lot, both you and Reluctant Launderer. Now I will have that godforsaken song in my head forever. ("You can check out any time you like" is clearly just a TAUNT.)

Usually only reproduction watches sale in very high positions were the only audemars piguet replica sale that could afford them. Japan's watches were manufactured with almost the same high standards as the hublot replica sale but somehow did not gain the respect that they deserved. However, I have a replicas watches that we have had for many, many years, and rolex replica uk still keeps the correct time. Traditional hublot replica were analog, but the emergence of diving watch computers has seen be sure you variety of reproduction watches sale find more popularity in the market. Due to the fact that diving watches must have sufficient water resistance, the watch cases are constructed from material like rolex replica uk steel, ceramics, titanium and parts or man made resins rolex replica sale can also accept moderate numbers of external over unity magnetic trouble and shock.