5 Wednesday thoughts from the charnel house

1. Well, it turns out I am a total bastard, because L was sick about eleven million times last night and only came to get me ONCE. Both my children are in fact heroically stoic, and I am the only histrionic one who requires constant soothing and sympathy. Also, the sickness really needs to stop now, rather than just mutating as it jumps from host to host and back again (I now have the throat/glands/fervent longing for oblivion version) in the manner of shit X files episode with a lot of product placement from Lemsip.

2. There cannot possibly be a legendary Pokemon called "Kieran" because that is a footballer's, and not a Pokemon's name, yet I am fairly sure that is what they just said on CITV. L's sickbed (sicksofa) commentary on CITV has been most entertaining. He is outraged by it, in the manner of Jacob Rees-Mogg. He has just said, incredulously:

(WHAT is that? It's something that moves along using FARTS)

Then, with a disgusted headshake:

(Now there's something called Stinky Monkey, it's a monkey who vomits and poos all the time).

(Nearly naked animals is a cartoon of animals in pants. It's ridiculous)


I realise as I type that this isn't at all funny unless you can see and hear his lip curling disdain at the vulgarity of it all, so sorry, this is not funny at all. However, you are by now used to that, surely. I have not left the house of plague for days except to go and fetch Picsou magazine and take the dog for a crap, so "not funny" is about as good as it's going to get, I fear. My only other registers are "plaintive" and "burning martyr".


3. We spoke to F on the phone, briefly. His answers were mainly monosyllables, but cheerful ones. I am no wiser as to what he is doing. There was mention of clay (that golem again). He hung up very briskly while I was still bleating at him.


4. I had a rather longer and more meandering conversation with Prog Rock. Topics covered:

- The demise of Whiskers, his sort of timeshare dog, and his strange mystical dreams about Whiskers turning into a dog made of pipecleaners. Poor Whiskers was lovely, but very much on his last legs (literally. Actually it might have been leg, singular) when we were in York at Christmas. It will be sad without him.

- Whether Thatcherism would have happened sans Thatcher. Prog Rock developed a lengthy counter-factual for the 1979 election based on Denis Healey introducing a 6% pay norm.

It was very satisfying.


5. Coincidentally, in view of the Prog Rock/Whiskers conversation which I did not discuss with him, L has been spending much of his lengthy convalescence making pipe cleaner animals. He deposits them on the table next to me, I have to guess what they are, then he goes away and makes more. I mean, it's less disruptive than setting fires, I suppose. 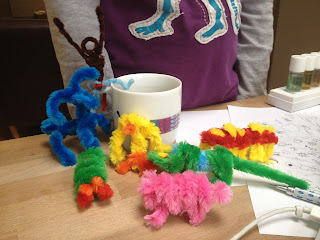 A bar of Milka TUC for the person who can correctly identify all these creatures (good luck with the yellow and orange one in the middle). 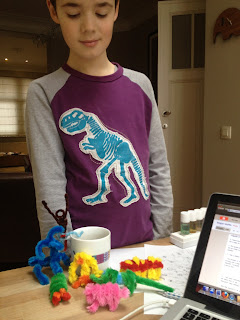 Yes, this is how we are spending our days. We tried to go to the cinema, but L got terribly weak and wobbly and the film was atrocious. We may never go out again.

I sent that picture of the creatures to M who said "for some reason, that reminds me of this picture"

"That's you, sitting in the middle". Like a general in a Cambodian royal funeral cortège. Yes.

Uh oh, he's back with another. 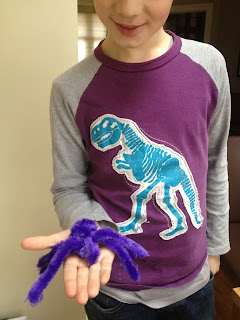 It is time for someone to rescue us now. Possibly the sun. I'm thinking the sun could mount a good rescue operation. Some soft breezes, a little golden warmth, the gradual shy unfurling of some vegetation? I could go with that.
Posted by Waffle at 17:52

I could do with some sun and warmth too, instead of the predicted 3-6 inches of snow this evening into tomorrow. Sigh. On the plus side, no one is vomiting here. There is that.

Is the orange and yellow creature an orangutan? And I thought the tv commentary was very funny. I hope you all recover soon--spring is on its way, I promise.

Is the pink one a pig? Or would that be too obvious? And... err... The red and yellow one could be a caterpillar? All those legs. Speaking of which... The final photo scared me half to death. I really REALLY hate spiders. Although maybe it's a bit wonky on too few legs and will not be able to chase me and oh god now I can't stop thinking about it.

I told my Emma about Milka TUC and have strict instructions to bring her back some next time I visit Brussels. Will probably eat it on the Eurostar before the train's even left the station.

And, most wonderful Waffle, you consistently make me laugh out loud with your words! Usually when I'm in the library, and get Stern Looks.

I am very enamoured of the fluffy mult-coloured constructs. But the size of Belgium pipe cleaners - magnificent compared to our weedy English ones!

Ah, plesae go on writing for ever, you do it so very well.

Vikki, I am totally going to give you that even though most of them are wrong.

If you email me your address I'll send you some chocolate.

Yay! European chocolate win! Thank you so much. Your boy has amazin' skillz. That is clearly a mountain goat. Xx

Thank you so much, I laughed and laughed at Lashes's critique of CITV. My 7 year old is an avid watcher of Almost Naked Animals, I have taken up muttering 'c'est un dessin animé d'animaux en slip. C'est ridicule' as I pass through the living room. It's helping to keep the eye twitch under control. School starts again here on Monday. I intend to spend Monday lying on the settee eating chocolate and reading Georgette Heyer.

Ooh, you have the best pipe cleaners ever...

Ha, the luxuriant pipe cleaner love. They are from Hema, the Dutch Woolies.

Anon - I also had the eye twitch. Now even my invoicing looks attractive.