The Dream at the End of Uccle

Prog Rock and I had one of our intermittent text exchanges recently in which I asked him to go and look for a book of mine I was desperate to reread and he confessed cheerfully to having taken it to the Oxfam Shop (Prog Rock is basically working towards the point where his only possessions will be a giant sack of lentils, Madhur Jaffrey's Eastern Vegetarian Cookery and a library card), so I retaliated by forcing him to send me some Cream of Tartar. I love our correspondence, no one else in my whole extended family is saintly enough to do my arbitrary and imperious bidding. We had another good exchange recently where I tried to get him to remember the title of a children's book we used to have when the only information I was able to convey about it was:

(i) the phrase "the light classics" (ii) possible mention of Rimsky-Korsakov? (iii) tentative appearance of  a tiger (might be elephant).

He has not yet worked out what it was, but I still have hope.

Anyway. I have my cream of tartar (what is that anyway and why do so many scone recipes demand it?  More on this gripping topic as we have it) but I did not have my book. I had been reminded of it by a discussion with Mrs Trefusis about the feasibility of running away to Morocco ('running away' is a recurring theme in discussion with many of my friends, particularly the ones that have children or an uneasy relationship with HMRC), and replied to one of her messages with 'we could be like Paul and Jane Bowles and live on gin fizz and maintain a complex network of lovers', remembering precisely this book.

The book - The Dream at the End of the World - is a sort of dark, salacious romp through the lives of the renegades and exiles that congregated around Paul and Jane Bowles in Tangier in the 1940-60s. It is an extraordinary tangle of art and debauchery, an inordinate number of gin fizzes, doomed affairs and the odd exotic pet. I first read it when I was about sixteen and it had a deep, lasting - and I suspect very unhelpful - effect on me. I honestly thought that adult life would be like that: a convenient bequest from an aunt, a life of travel and literature and sex, pet parrots and spiking Robert Rauschenberg and Christopher Isherwood's food with a potent form of cannabis called majoun (ok, maybe not that).

I could not rest until I had it in my sweaty grasp again, so I ordered a copy from some obscure source for approximately three quid (it's out of print, which is a crime) and NOW IT HAS ARRIVED. I have been immersed in it every since.

On rereading it, I find I am repeatedly struck by the difference between my own life and that of the 'Tangerinos'. I know they mainly ended up alone and mad and broken, but they had a wild old time before they did, and my god, no one could say they didn't live. Does anyone still live like that? I like the idea of it, but I am plainly constitutionally unsuited to that kind of abandon. I would have spent the whole time wondering how I was going to get home safely and worrying where my passport was and probably suffering from excruciating prickly heat.

This week, whilst I have been scrabbling around anxiously in a dusty box file from 1994 for information to complete a form for HMRC, Paul Bowles was getting into trouble with the natives in the Sahara for bringing his pet Amazonian parrot Barbarhio to the tiny desert hotels where he is finishing The Sheltering Sky. While I was reviewing 610 European Court of Justice judgments in the heavy industry sector, Paul Bowles was forced to relinquish his lover to torch singer and actress Libby Holman after the two met during an avant-garde film shoot in Libby's Greenwich mansion swimming pool (the liaison that later ended with Libby suggesting a suicide pact, Ahmed cutting up every piece of clothing she had given him and throwing it into the bath and calling her a "camel"). While I was worrying about my chin blemishes, stomach fat, poor teeth, and having forgotten to buy washing powder, William Burroughs was prevailing on Paul to try his "orgone energy accumulator", a coffin like device that he has installed in the garden ("almost froze to death"). I'm not even picking out particularly good bits here, it's all like this.

Also, I greatly appreciated this excellent description from Alfred Chester of his behaviour at his leaving party on the way to Morocco:


"I learned today I did the following things... "bit Muriel's finger nearly to the bone, smacked Jay, bit Dennis' upper arm so hard he's been in pain since, smashed Walter's precious tea cups, then tried to jerk off Jerry, threw a Bloody Mary at D. then threw him on the floor and later tried three times to push him out the window.. put my hand on the cunt of a girl named Sally (and) squeezed lime juice in everyone's eyes .. After the party I went out and picked up a gorgeous Puerto Rican".

Hmmm. I did, unusually, go to a party last night, but I had two small glasses of cava and took the metro home. I'm fairly sure I didn't bite anyone and there were definitely no gorgeous Puerto Ricans.

I really, really want to quote you whole pages of the bloody thing, it is so full of brilliance, but I will confine myself to this extract from Phyllis and Charles della Faille's road trip to Egypt to acquire more animals for their sordid menagerie, do enlarge, I entreat you, it is well worth it. 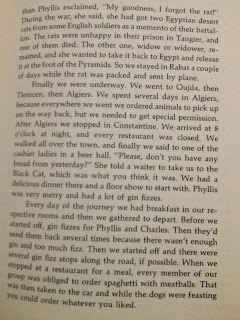 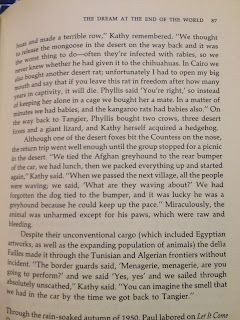 I don't know, it's not like I really want to be bitten on the nose by a desert fox, but it would nice if there were still people out there doing things this unapologetically lunatic. Are there? I do hope so.
Posted by Waffle at 18:45

It may be The Dancing Tigers by Russell Hoban (the immortal author of the Frances stories).

Oh my god! Julie, YOU ARE AMAZING. I had begun to think I had imagined it.

Woooho, Frances being the badger girl? In Sweden she's Polly for some reason. I also seem to remember another badger family with a big brother and his little sister - Walter and Charlotte, anyone?

Not nearly as exciting as Bowles. Then again, The Sheltering Sky, film and book alike, made me huff and puff like the big bad wolf. Not To My Taste.

Affairs with scary women from the marketplace are always doomed, but don't let that stop you.

Have you read The February House? The true story of a house in Brooklyn that housed Paul and/or Jane Bowles at one point, but also Carson McCullers, The Mann siblings (what, those Manns? Yes) Auden, Britten and Gypsy Rose Lee and many others at the beginning of the war. Honestly. The Thirties were mental, weren't they? Definitely worth a read.

How I love a Prog Rock update! And one with a surprise hidden Russell Hoban reference--particularly to a Hoban book I haven't seen myself and must now hunt out straightaway--is better yet.

I first fell in love with that(ish) era and scene in Tangier via Paula Wolfort's reminisces and always feel a bit guilty that I am so VERY susceptible to the romance of being part of a decadent bunch of expats partaking of the exotic colonized elsewhere. And yet there it is.

Only tangentially related: have you ever encountered the "Summerhouse trilogy" (very much best read together and only a few hundred pages in total, did anyone ever even print them as separate books?) by Alice Thomas Ellis? I see there was a BBC version so perhaps it's much better known over there than over here, but somehow it seems like it might suit the mood of the moment.

Salome - That book, and the house, gets a mention in this one, it sounds amazing,, definitely adding to my list.

Redfox - I haven't and it sounds wonderful. I will.

Frau Antje - Having seen the women in my market place, I concur.

I think The Tyger Voyage by Richard Adams possibly mentions the light classics? or is it the Hoban for sure?

I immediately thought of the deeply un-PC book that we had as children, called The Story of Little Black Sambo by Helen Bannerman, which definitely has tigers and is supposed to be A Classic. But perhaps it's not.