I don't know what happened to this week. Perhaps the dog ate it. He's eaten everything else. I feel like it started shitty and improved, which is a lot better than the other way around, but you know, if I were drinking corner shop wine and watching ludicrous Richard III documentaries on Monday mornings, there would be something wrong (or very, very right). I know that until about Wednesday I was whining constantly about moving to the Ardennes and opening a donkey sanctuary and now I'm not.

Consulting my photos over the last seven days I have: 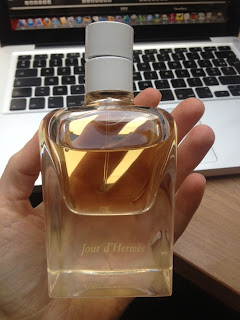 I got sent this by courier by a PR, which is about as exciting a thing as ever happens to me, apart, possibly, from the day we got VIP access to the giraffes in London Zoo many years ago and I was allowed to feed one a slice of Mother's Pride. It is Hermès. It smells nice, of flowers and so on. I took the picture thinking I could somehow find a way to thank the sender in a social media style, but I can't. I just feel embarrassed and shifty about that kind of thing. But you know, thanks, Hermès (this isn't quite cutting it I fear. THIS IS WHY I CAN NEVER HAVE FREE NICE THINGS).


2. Returning to more familiar territory, we have the Roomba ambitiously trying to eat a large metal boot remover in the shape of a beetle. 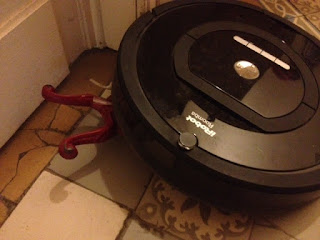 The honeymoon is over between me and Roomba, with all its officious whirring and attempts to swallow whole aprons in the manner of a boa constrictor. I appreciate Roomba and its stellar services, but I no longer love it, because of all the time spent trying to persuade it to disgorge cables and emptying its dust tray of Lego pieces and money and discarded socks and dental floss. Yes, I am a fickle bastard.


3. A picture of the dog hogging an expensive Svenskst Tenn cushion, just because he can. There is only one expensive cushion in the house and it invariably ends up under the dog's delicate head. I came in yesterday to find him licking it meditatively with the self-same tongue he uses to lick up pools of urine on the street at excruciating length. THIS IS ALSO WHY WE CAN NEVER HAVE NICE THINGS. 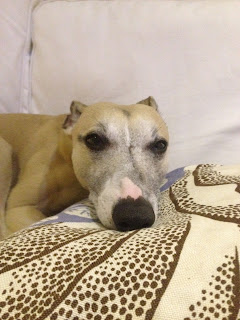 Very busy not giving a shit about your soft furnishings

4. Two pictures of my newly discovered spirit animal, which is a neurotic horse called Noblesse. Noblesse is sweet and well-meaning but she has a lot of nervous tics and unfortunate habits. "Oh Noblesse" I said to her yesterday, leaning my head against her neck whilst being careful not to touch her sore ointmented shoulder. "You shouldn't rub yourself raw". Then I remembered that I spend 36% of every day picking at dry skin on my face until it bleeds, and I let her be and gave her a piece of apple. She makes my heart ache. 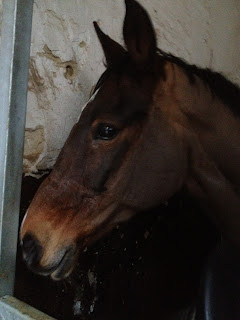 Five other things this week:

1. I did a bird census in the back garden last weekend (if my seventeen year old self read this, she would beg to be put down like a wounded animal). I was somewhat hampered by being too short-sighted to see any of the birds and it was a bit tragic, me on my own, squinting out at the various Small Brown Birds in the garden in terminal confusion. Occasionally I would collar a child with a mad yet infinitely determined look in my eye and demand that they look at some pictures of various tits and compare them with what was lurking around the fat balls.

And they would get a sort of shifty look in their eyes and lie to me and then run away again. I have now learnt how to say "starling" and "coal tit" in French which is almost as useful as my extensive butterfly and soil variety vocabulary in Dutch. If I combine all my language skills you get something like:

Maybe I need to go into surrealist poetry.


3. I bought a cardigan. It is grey and unearthly soft and was in the sale and it is the first thing that is not food or a book for my eldest son that I have bought in an age. It is by these people, but when I wear mine I do not look like any of those haughty moddles with angular cheekbones, I feel soft and welcoming like someone's granny and like I probably smell of Yardley lavender and talc and might just open my stout handbag and bring out a packet of Rolos for you (my granny did this. She also had a biscuit barrel IN HER BEDROOM and this is now the standard of domestic luxury against which all other bedroom amenities are tried and found wanting). I doubt this is what 'Majestic Filatures' had in mind. The only problem is that now I need a post-it note attached to my granny cardy in the manner of Liz Lemon that says "DO NOT WEAR AGAIN UNTIL WASHED". Especially since the smell of Yardley lavender and buttermints is now joined by the insistent smell of Old El Paso Fajita mix. I forgot to mention that I was approached by Old El Paso's social media "team" a few weeks ago asking if I might like to link my Old El Paso posts back to their site. Erm. I believe the term I habitually use in relation thereto is "MSG and despair". I am at a loss as to how to respond.


4. My Kindle in its infinite wisdom mysteriously decided to unilaterally download Sheila Heti (or I pre-ordered it months ago drunk and forgot, this is conceivably the case). I have only just started but am loathing it with a fiery loathing. Have you read it? Should I force myself to continue?


5. Actually, there isn't a number five. I am going to Paris next week to stalk pâtissiers though, so there is a suspicion there may even be actually leaving the house style events to report. If you like poorly lit photographs of eclairs and reports of violence perpetrated against me by elderly ladies, that is, and honestly, who doesn't.
Posted by Waffle at 22:47

Did you get that long drapey one? Delicious. It looks like a blanket.

Today we are having a blizzard, which is being variously dubbed the Storm of the Century and Northeaster Nemo. Hysteria is ensuing.

I know you like stories about animals in peculiar situations, so here is this thing that happened yesterday several miles from where I live: http://www.nydailynews.com/new-york/goat-escapes-brooklyn-mali-goat-herder-helps-capture-article-1.1258184.

I got on the treadmill on Wednesday. I would have continued my exercise streak yesterday, but I had to go out for drinks with some coworkers.

That is my week.

I hope Paris is lovely. Have you ever tried sassing the old Parisian ladies? You know, a little back-talk? Give 'em some lip?

You know what really worries me?
That at this stage in my life, moving to the Ardennes and opening a donkey sanctuary sounds like a truly fabulous idea(I do worry about the donkeys, I do).

I've been meaning to email you about obsessive blogging - I've done 61 days in a row, albeit with a fair amount of time on my hands,when I'm not actually being poisoned by the oncologists. I seem to remember that in the early years of this blog you blogged every day for some truly unfeasible period of time, whilst holding down a full time job, not to mention les enfants - is that right? How long did you keep it going for?

You are my role moddle, Waffle.

Margaret - I love the goat story it is wonderful. And the goatherd/parking attendant/lassoo. Thank you so much. I don't know about talking back to the old ladies. I have a serious case of esprit d'escalier when faced with ire filled pensioners.

I will email you The Truth, Ms Fo.

Soil is important in Dutch (muskrats are regularly killed just for eating away at it), like snow in any Inuit language. Perhaps this is why the literary canon was produced by a handful of outsiders. But then, if our relationship to nature defines our relationships to ourselves and our communities, who's to say that dirt just isn't enough to go on.

You're free to do a bird census here, almost all the birds are on the large side. I'd do it myself, but was recently put off by the 'term for the total combination of characteristics that serve to identify a particular species of bird'

I am now seriously considering a garden bird survey. I am, worryingly for my senility, interested in the result. And photographs of eclairs score highly with me, utterly irrespective of lighting. I advise you to lead the attacks with your elbow; most effective at shifting obstructive Seniors!

Stalking patissiers in Paris sounds like a HORRIFIC task.
I will be happy to volunteer in your place!
Egalite, liberte et soroite! (Still haven't figured out how to do accents on this darn laptop! Desolee!)

I read it; I found it really disappointing! I expected so much.

And, per other post, I have a small relic—a piece of cloth touched by Therese of Lisieux. Ghent flea market. 50 cents. LIVING THE LIFE.

The sex parts of the Sheila Heti were gross.

his article is very helpful at all thanks

thanks for sharing useful information
python training in bhopal