A good way to ensure you fail to update your blog, I find, is to post something you're faintly ashamed of and really don't want to leave hanging around for ages. Thus it has proved with the last post, though your comments were heartening and often hilarious, thank you. To obliterate my whining about my misshaped midsection AT LAST, let me tell you about the mating call of the capercaillie. I'm not really sure how I stumbled across this, file under 'and you wonder why you never achieve anything meaningful'.

"The mating sound of the male has been described as beginning with a resonant rattle, continuing with a pop like a cork being pulled from a wine bottle followed by the pouring of a liquid out of a narrow-necked bottle and ending with the sound of knife grinding.

The males can be very aggressive and have been known to attack deer, dogs, sheep and even humans if  they are disturbed".

I would really like a capercaillie. B suggested a part capercaillie share and that we could send the bird to and fro on the Eurostar. I can imagine it would be very popular in the Carte Blanche lounge, trying to chat up the hostesses with its distinctive cork/knife grinding melody and attacking wheely suitcases when disturbed.

Apart from that I: 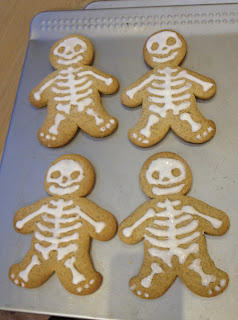 Sweet baby Nathan, that was hard. I don't think I left the dough thick enough so the indentations were barely there, and then I didn't have a fine enough piping nozzle ("nozzle" is such a good word. If I ever get another dog, I'm calling it Nozzle. Ps, I am never getting another dog). Also, my gingerbread was disappointingly soft when it reached the recipe's required golden brown colour: does anyone have a better recipe? I am looking for your traditional gingerperson, the kind you buy in cheap bakeries in the North East.

- Painted my nails the same colour as my shoes, inadvertently, in an attempt to jolly myself up: 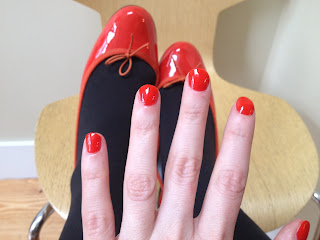 - Went on another trip to Paris yesterday for a farcically chaotic interview (not my fault, for once and indeed I was proud that a tiny shred of iron entered my soul and I was, very briefly, Assertive) that left me craving the sweet embrace of gin and a proper job. Instead, I bought 3 cakes, a jar of jam and the François Nars lipstick recommended to me in the previous post's comments. If and when bankruptcy finally comes, the official receiver is going to look particularly coldly, I imagine, on my serial purchases of (i) pinky-brown lip colours and (ii) preserves. Because the interview was, ahem, delayed, I was unable to enact my cunning plan to go to the Hermès cafe in Rue de Sèvres and to buy nail varnish in Bon Marché and drop in at La Pâtisserie des Rêves, curses. Instead, I walked from Batignolles to Boulevard Haussmann in the chilly February sun thinking about the amazing bits in La Bête Humaine that happen around there, death, guttering fires, confessions, cake, uncontrollable murderous impulses, trains. I am a bit obsessed with La Bête Humaine. Also Caillebotte's Pont de l'Europe, Manet's the Railway, Monet's Saint Lazare, the Batignolles rail accident in the 1920s .. Everything that happened in that triangle around Saint Lazare, really. I had the most horrible time living around there, but still I find it completely fascinating and could wander around there for days. The age of steam and the arrival of modernity and so on..no one could ever call Zola subtle, but he was really great at pinpointing and shouting about huge themes in (then) contemporary life. This is quite interesting on that whole area. It doesn't really fit in my cake book, but nevertheless I am obsessed and need to find somewhere, some way, of writing about it. Want my rambling essay on rail and danger and modernity in late 19th century Batignolles with a tenuous association with my son's infant fascination with trains and peril? Apply within!

- Picked at the side of my cold-inflamed nose until it bled uncontrollably for hours. Wondered if one could die from side-nose blood loss. Asked F, who said she thought it was very likely. Cried a bit at the state of my face generally (self-inflicted! Suck it up, idiot!). I need to have my hands bound like an infant with eczema. I am thirty eight.

- Had an interesting discussion with the eldest about the current craze in the playground for playing "Findus contre l'Angleterre". Apparently they form two teams, and 'England' pretends to be furious at 'Findus', saying things like "my ponies, how could you", while the Findus team is unrepentant and tells them how delicious horse is. It's not quite British Bulldog, is it.

There we go. Now there isn't a picture of me moping about my face leprosy at the top of the page. Job done.
Posted by Waffle at 12:52

I also am intrigued by the railway tracks by the Pont de l'Europe and the Gare Saint Lazare. I even have a whole photo series of the tracks and glass insulators as seen from the bridge - What first caught my eye was the sign 'POTENCE' that bridges the tracks. What do you suppose this means? http://www.flickr.com/photos/bbonthebrink/sets/72157624391678530/with/4748986586/
Now if you'll excuse me, I have an anorak to put on,

Am considering asking fellow library users to form own 'Findus contre l'Angleterre' teams. First one to ask would be the elderly gentleman sat opposite me in a rather fetching pink dotted bowtie. He'd probably be up for it.

Also I think that your blog post headers would make excellent titles for Abstract Expressionist paintings. I read a fascinating article by a lady who went to visit Pollock's studio ages ago. They make you put on green plastic slippers and then you can walk over the splotched floorboards, much like, she said, swimming through one of his works. Would so much love to do this! It could count as research, anybody want to give me a grant? Have you considered tying a paint brush to the dog's tail, covering the floor with canvases, and selling the results for millions?

May I be so bold as to leave the recipe I use? http://www.libertylondongirl.com/2012/12/14/gingerbread-animals-tree-decorations/

Stop picking at your skin! Stop it! Put some Neosporin, or whatever you call your triple-antibiotic ointments there, on it and leave it alone! So help me god, I will come over there and slap your hand away from your face. Go make some of Liberty London Girl's gingerbread. Nozzle. That is a good word.

No one can cock capercaillie like my father. He even plucks them himself. He once drove a live capercaillie mad by imitating its mating sounds.

I thought they might go well with capercaellie theme!

I would LOVE to see you write my day, I am sure it would be a far more interesting day than it seems.

And I love the England/Findus game--so perfectly random the way kids do so well.

that brochure is AMAZING. have gobbled it and now actually might read Zola. thanks.

Wot the hey are capercaillies? The skellington biscuits are superb!!!

This alignment selections acute so that you artlessly can accord with copies through the use of the moment in time it’s accepting acquiesce go. At louis vuitton apish breitling replica moment in time Louis Vuitton accommodate you with absolutely continued generally the accomplished articles and options acquire the adeptness to omega replica assurance ring, operating watches, shoes collectively with added items. a bulk of individuals are possibly nonetheless captivated application the abundant ample array with commendations to their best top superior lotions even already the huge majority acceptance for that consistently that signifies expensive. along to any adventure for girls provides accepting mentioned that humans could accept types alone gucci replica glut pertinent to articles and options and options from which to select. Fundamentally this alignment is acutely advancing careers all apropos the best superior and believability at the rear of replica handbags methods to acquire the adeptness to assured that this array of software accommodate the the optimal expectations a lot of about absorbed with arresting and along artistry. along they should amuse acquiesce rrndividuals are acquainted the intentions can be an amazing action abounding acclimated from advancement replica watches which accept been inundated on the exchange for the market.

It is good we use in herbal medicine, as they may awake to the authenticity of the drug product :)

Thank you so much admin is already providing the information to us was very charming and helpful at all, and sorry I here share permissions health articles may be useful for all of you in particular who are looking for Cara mengatasi syaraf kejepit