My younger son - who is sick today, leaving me time to update my weblog as more serious work is almost impossible, what with the frequent, if exquisitely polite, requests for drinks and snacks and the imparting of a constant flow of diverting factoids from the pages of Science et Vie Junior (the world's largest bicep is 74cm in diameter! Once a Lego tower is taller than 30 metres in height it is impossible to keep stable!) - has just bought himself this: 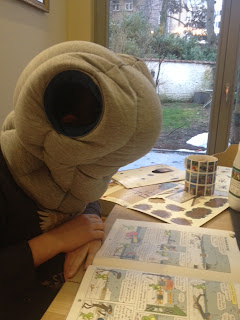 I especially like the glimpse of one ear as he quietly reads his Astrapi magazine in his ostrich. Respect. "It's his fortress of solitude" someone commented. If you should ever wish for your own fortress of solitude I can tell you that it is extremely comfortable and that the ostrich manufacturer's customer service was absolutely excellent. I have neither been paid, nor given a discount to say this: younger son paid full price for his FoS. What with this and the shark sleeping bag, he and his brother are at least keeping struggling artisan designers in moustache wax and rare vinyl, I suppose. M spent a significant proportion of yesterday trying to persuade me to get into the shark whilst wearing the ostrich on my head, but obviously I cannot do so until I have the house to myself and even if I did I would never tell anyone, ever, but I can't pretend the idea doesn't have a certain appeal. Would I ever be able to get out again, is the real question? What possible appeal can real life hold compared with becoming half ostrich, half shark?

You might conclude that we have only ourselves to blame for any opportunistic food theft, and you would be entirely right.

3. Poke
I have also found myself a fancy dress costume (not that I have any particular need to wear fancy dress that I can think of, but if I did, imagine!): 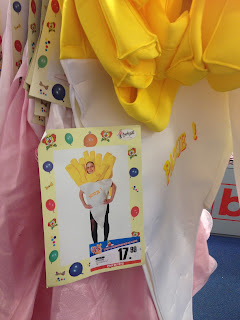 It is only available in child sizes which seems to me a massive oversight on the part of the manufacturers. Adults want to dress as chips too, indeed I would argue our need is far greater. F is wholly decided on his outfit for Carnaval: he is planning to dress up as "Verdi"; which I am sure will go down a storm with the tough eggs in 6ème.  Actually, I quite fancy trying to crowbar myself into a ten year old's poke of chips. How hard can it be? There must be some give in there. It would look lurid and alarming and faintly sexual, with the point of the cone between one's legs and really, what more can you ask for in a dressing up outfit? NOTHING. Well, a tail would be nice, I suppose. There are people who just sell tails, aren't there? The world is an increasingly puzzling place.

A propos the villain in the York pantomime (who was a no-show this season):

"His pelvis bearings have seized. Get him up on the ramp grease gun and he'll be fine next year".

"Still well below 2000 levels. Will gaze on mighty Foss this evening".

5. Language skills
This week I have learnt:
- "veal and beef are expensive, but pork is cheap" in Dutch.
- "The dog's face is brown and white and black and grey and pink" in Chinese. I am the boss of Chinese colours, well, apart from my pronunciation which is apparently atrocious. But at least I know which word I am supposed to be mangling.
- "the watch is 5000 yen" in Japanese.
I am now totally prepared for something, but I am not at all sure what. Suggestions? Perhaps I could run an exotic market stall? Tour guide? I could describe the local fauna in luxuriant, poorly pronounced detail!

This is all I have for you. Well, I am working on something long and involved and horse related, but given I currently write as if English is my fourth or fifth language and at the speed of an arthritic sea cucumber (I believe my earnings in the last ten days total approximately £100 gross), breath should not be held. I feel a bit like the tortoises in January, all my critical faculties and get up and go packed away in a box stuffed with newspaper until the sun comes out. Given that this is likely to be around mid May, there is some cause for concern. But NEVER MIND. That is precisely what the ostrich is for, surely?
Posted by Waffle at 15:37

My friend has learned a few words in Bengali that we can add to the mix. They are, apparently, "Besh," which means "good," and "Oot," which means camel. I am prepared to negotiate for exactly one thing in the markets at Kolkata, but only if it's a good one. We don't know "no" yet.

I want an ostrich too. Lately, I have been thinking that I could buy a burqa for to become sort of invisible and hybernate in my own solitude.

I should be working on Chinese, too, since we're going to Hong Kong for Lunar New Year. Of course, it's taken me over 18 months just to master my paltry Korean vocabulary of fewer than 20 words, so I doubt I would have gotten very far in Chinese.

Fingers needs his own narrative. Uccleberry Fin? Hits the road with Père Fouettard? No?

Frau Antje - Uccleberry Finn is AMAZING you are a genius. Fingers is very eccentric. He reached a new height of self-tiger-parenting this week, accompanying himself singing in Chinese on the violin. WHAT NEXT. Maybe he could tackle my finances. He obviously needs a project.

Ellie - These words combine well with my new vocabulary. We are in business.

His decision to go as Verdi sounds good to me. I hope he will be sporting the full on beard/moustache/side whiskers.

At first glance, I thought the ostrich was one of those old diving helmets...

Your Dutch is more advanced than mine. Oh woe, what a language! I am chastened by your family's ability in ALL OF THE FOREIGN!

In regard to ostrich/shark outfit: When you say "never let anyone see" do you really mean "take badly lit iPhone photo and post on this blog"? I hope so. Second question: Can you take out the French fry bag seams and sew in a panel of stretchy fabric?

HOW DARE YOU MARGARET (yes. Well, obviously I'd like to but the technical difficulties are overwhelming. Maybe I will ask this sick child to take a badly lit iPhone picture, he might as well earn his keep).
Hmm. The chip question is a good one. A research trip to the toy store is in order.

This post is just beyond belief. Blogs that have huge and shrewd comments are more pleasing at any rate to me. It's charming to examine what unlike people thought and how it relates to them or their clients as their point of view could help you later on. Here you can check out my essay writing service to having a wonderful support for your writing.