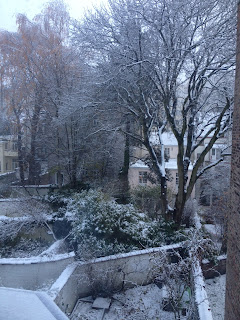 Most pathetic sight on a snowy day: a weepette (or "wimpet" as my neighbour misheard, which also seems appropriate) in a too small dog coat with half its bony arse exposed, being forced to "have fun" in the park. Creature really, really needs a new coat. Amount of time wasted on stupid websites looking at ludicrous whippet clothing: redacted.

2. Younger child increasingly eccentric. Spent half yesterday looking up and painstakingly copying out Chinese characters. Has taken to wearing a woolly hat with pyjamas in manner of a potholing Wee Willie Winkie. Still singing Verdi constantly. Requested a snack of "half a raw onion" for school tomorrow. At his paroxysm of weirdness yesterday, he made me converse IN CHINESE with a plush red blood cell for several minutes even though my Chinese is limited to a poorly pronounced "Hello, how are you, my name is Emma" (so he tells me. For all I know, I might be saying"you have a compelling forehead") and "The Great Wall of China". The plush blood cell did not have much in the way of conversation anyway. I have pressed a DS into his clammy hands this evening but he is still singing "Wassily Kandinsky" to the tune of Gangnam Style, which does not even scan properly. 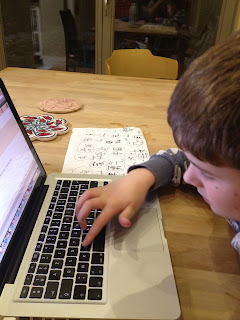 3. Haven't actually been reading NW, as suggested over in the sidebar, because I started it, but was still slightly reeling from May We Be Forgiven which was so odd I needed some time to digest it. Instead, I finished someone else's cake memoir (research, but quite gripping), inhaled India Knight's Mutton in half a day (very cheery) and started on a pleasant series of archeology themed thrillers. Sigh. The brow, he is resolutely low. Next, either I attack NW again, or possibly move straight to The Yips. Thoughts?

4. FINALLY went to the Dr Guislan psychiatric museum in Ghent, a long promised treat, with Eireann. Sadly the Roca collection of wax venereal diseases and pickled curiosities had moved on, but it was still rather amazing. The building is beautiful and the collection deeply weird. 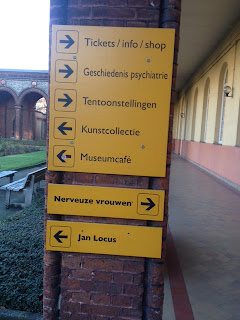 Hysterical women to the right, Jan Locus to the left.

The door where you stick your sticker: 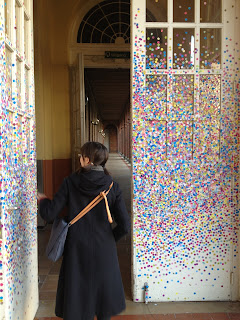 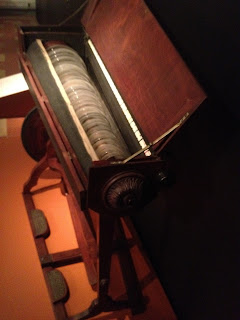 Ghent was looking absolutely stunning in the winter sunshine, and the train journey was cosy and delightful, with frost tipped grass in the fields and a low, cold mist through which I could occasionally make out sturdy horses with teddy bear soft thick winter coats standing, watching the train pass with understated equine curiosity (get your anthropomorphism here! Cheap and plentiful!). It made me wonder why I leave the house so rarely, but as Eireann and I discussed, the temptation to stay in and become a hermit is strong. "I could be working!" you justify to yourself, idiotically, even though you plainly aren't in fact working, as you forage a meal of old digestive biscuits and chicory from the back of the cupboards. Well, you think it rather than saying it, because you have probably lost the power of speech because you haven't seen another soul for days. Anyway. It made me determined to go out more. "Out". There is a whole lot of "out" out there. I have lists. There is, for instance, a medical waxwork museum somewhere in Anderlecht that has my name all over it.

5. Wintry joy is: a new series of Minuscule on DVD. I adore Minuscule: it is clever and touching and funny and if you have children of any age and any nationality (there's no dialogue) to buy a present for this Christmas, you could do a lot worse than this. I can't decide which is my favourite, but I especially love the newly introduced team of evil red ants (there is a particularly lovely twist on them in the longer bonus episode, La Nuit des Mandibules, which filled me with happiness). You can watch quite a few episodes here to get a taste.

I must go. My children are shrieking like feral beasts. I can only surmise that they have forgotten that the sinister Père Fouettard is scheduled to visit and throw them in his sack this week. I tried to remind them that judgment day was nigh but they just fought about whether whipping was better than being kicked around in a piece of burlap all the way to Spain. The smaller one is humming Rigoletto whilst whirling a wire coat hanger over his head and the larger one is asking me quiz questions off a pack of cards from the supermarket, including whether couscous is a bird. Wish me luck.
Posted by Waffle at 20:47

I love the signage.

Might you be interested in this novel involving cake? 'The Particular Sadness of Lemon Cake', by Aimee Bender. It's about a girl who can taste the emotions of those involved in the production of food, and other leftfield weirdness.

Stay warm and dry. Perhaps buy yourself and the weepette matching outfits!

Now my life feels boring. My younger only channels Philip Glass while she rolls out play dough. Verdi, now - that would be a tune.

While scavenging our evening meal last night, I was listening to Nigella Lawson (but not watching) for the first time ever. It was somewhat disconcerting that, to me, she sounded like Sister Wendy (a hermit). However, she never did break into a recipe for hardboiling a bunch of eggs, like that Italian painter, just so there would be some food around.

Couscous IS a bird, right? Migratory and speckled.

I see that "nervous women" are directed AWAY from the Museum Cafe....yet another example of gender discrimination!
Snow has long gone on garden here in Leuven leaving soggy, decaying leaves which "should" have been raked up weeks ago. We are becoming the "trailer trash" in the neighborhood & we don't even have a caravan!

I'm having a crafty idea -- could you cover the current dog coat with a bigger piece of fabric? It would depend on whether working around the hardware would make it easy or hard.
Use fleece, the edges won't ravel so they don't need stitching. I am not helping, am I?

I hope you let us know what you think of NW, once you've had a chance to read it. I've been debating myself over whether or not I should add it too my book list.

I love all the posts, I really enjoyed, I would like more information about this, because it is very nice., Thanks for sharing.
Handlessmillionaire.com Snakeis.com balloonsio.org

The termite control company in Riyadh is ready to get rid of all the existing insects, especially the termite insect, or as it is called the land, which is sure to result in a lot of damage such as the collapse of houses and other damage.
شركة مكافحة النمل الابيض ببريده
شركة مكافحة حشرات ببريده
شركة رش مبيدات ببريدة
شركة الانوار لمكافحة الحشرات