It is that time of year. The sinister man in the pointy hat and his super sinister helpers are gathering, checking the Easyjet schedules from Malaga to Zaventem, polishing their enormous child-beating sticks, darning their sacks and stocking up on coal.

My children are ready. Lashes, who has an easier relationship with consumerism than his brother (when they have money to spend, he will breezily decide in 4 seconds, while F spends hours agonising unhappily about the devastating opportunity cost of choosing one colour of Wriggly Finger Worm over another) was first, unprompted, with this highly detailed and slightly alarming missive to both red-suited operatives: 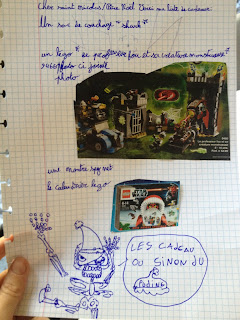 With wholly unaccustomed efficiency I have actually already acquired the "sac de couchage "shark"", because it was only available in America, and there seemed to only be about 4 in the world and, you know, I'd rather not be the recipient of the "puding" threatened by Skeletor Santa. I ordered it online about a month ago from an obscure crafting collective, fretted about my credit card getting cloned, and waited. Some time later, the postman arrived and asked me for €37,75 customs duty (he was carrying precisely no change and card payments were not permitted), and eventually, after much paperwork, the shark was released into my custody.

I DEFY you to cohabit in a cold attic with an oversized fleecy shark sleeping bag and not .. well. 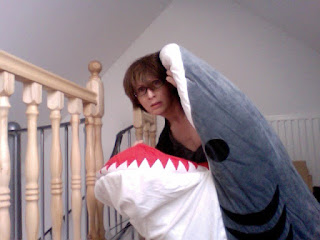 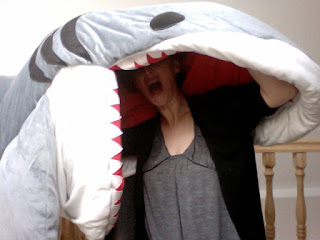 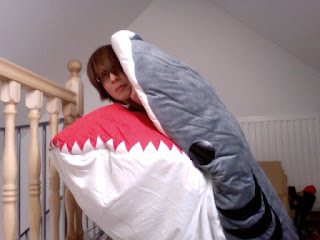 Yes, I did feel like an idiot taking these picture on M's request, and also, it was extremely tricky to press the Photo Booth button then wriggle into position, which is why they are a bit shit. However: I was in a giant fleecy shark and you still aren't, so I win. It is going to be a terrible wrench to part with him.

After last year's request for a cube of blue felt with eyes designed to his particular specifications: 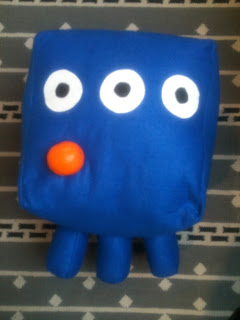 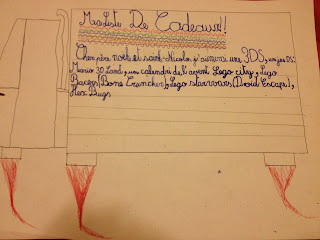 He told me he hasn't signed off yet - presumably with veuillez agréer, messieurs, l'expression de mes sentiments dévoués - because he is still thinking. I fear what may yet be added.

I am, however, impressed with how polite they both are. I guess that's what happens when presents are dispensed by a terrifying man with a big stick.

In other present news, I need your help. I have been tasked with filling my dad's iPhone with useful, practical and interesting apps that might appeal to a London/Oxfordshire based gentleman of a scientific bent, with little patience. So far I have been recommended the StarWalk thing, BBC News, the National Trust, and a Red Cross first aid app. Do you have any other ideas? Might there be an ornithology or a hill walking related app that is European? Anything else? I cannot imagine him doing games. I can't remember us ever playing a game when I was little, though he has recently been coaxed into table football with the boys. I am open to all and any suggestions.

Oh, and while I am begging your help, I might as well double up and throw myself on your ingenuity. It is nearly my birthday after all. Do you have any clever title ideas for my book project? I am supposed to write a proposal (as is evident from (i) creation of new blog (ii) heavy posting here (iii) extensive TV watching schedule, I am procrastinating like a mofo, in some kind of sombre psychological self-sabotage hari kiri, but write it I must, because otherwise, what the fuck have I been doing for the past 8 months?) and the proposal, and book, need a title. Basically, I am looking for something including the word "cake" or something related thereto. It's a memoir about loving cake, and using it as solace and belonging and a marker of identity and an act of love. Each chapter takes a particular cake, from a particular place and talks about it, then talks about some biographical stuff (you can see the proposal's is going swimmingly from that highly fluent, vivid, clear description). More of the cakes than not are Parisian. YOU GET THE IDEA. I would be hugely grateful for any ideas, to the tune of at least 3 large bars of Côte d'Or Milk chocolate with salted caramelised almonds or my firstborn, whichever takes your fancy.

Begging interlude over. I will return to doing almost anything rather than putting two pages of words together. I believe there may be some overdue invoicing I could get lost in.
Posted by Waffle at 12:00

Remembrance of Cakes Past. Obviously.

I ADORE the francophone hand-writing. In Sweden we disposed of that kind of exercise 40 years ago. As a result 48-year-old executives (husband) writes in block capitals.

I'm not very good at this, but what the hell.
Cakes R Me
My life in cakes
The highs and lows of cake
My Mille(s)-Feuille(s) of life...I don't know, something with a jeux de mots using Mille-Feuille i.e. your layers of life.
I'm enjoying your blogging frenzy. Of course.
BBx

Slices of my/a life?(maybe this only works in French... not sure)
Sweet dreams are made of this
La Dolce Vita
Sugar and life
A life more sweet
No cakewalk

OK, now I want cake. Would you want more of my absurd suggestions? (don't anwer that)

I think you've got the title in your post. "Cake: YOU GET THE IDEA."

Not all cakes and ale... just mostly.

Slices of life? I like Remembrances of Cakes Past! I'm shit at this - all my conference papers take the form 'Blah: blah blah blah', so I would highly recommend using a colon, such as 'Cake: a history of eating, making, and naming'. Oh god that's awful.

Re: Sinterklauss, the Dutchman has bought us a giant Speculoos in his image. Hooray.

I also love the blogging frenzy!

The shark sleeping bag is brilliant! I have eaten only a hard boiled egg today, so am incapable of coming up with cake-related book titles. Maybe this evening after my Friday martini.

Shut Your Cakehole: This is My Life
The Consolation of Cake
Raw and Cooked: A Life in Batter

Terrible, I know! Whatever you title it, I can't tell you how much I look forward to reading your book!

App suggestion: The Night Sky. It's stars and stuff with names. V useful. Handier than a telescope and a book.

Mind a blank when it comes to cake related book titles.

You and your children are delightful and whimsical.

Ooh, I love "Crumbs of Consolation"

I like 'Remembrance of Cakes Past'. Or, in a similar vein 'The Madeleine Effect: A Life in Cake'.

If I ever buy another sleeping bag, it will now have to be in the form of a shark.

I am dumbstruck in the face of all of the creativity in the above comments. Sorry.
However... I also bought the offsprings' Santa presents. And spread them all over the bed to admire them (basically a whole load of tat from John Lewis). THen I fell asleep, and was woken to shrieks of delight from the 4 yr old, on discovering the Tiger Hot Water bottle, and Baby Annabelle's hot pants, etc. So I quickly shoved them unde rteh covers and flung him out. Only to fall asleep AGAIN and then be woken by the 2 year old clambering into bed beside me, and her consequent shrieks of joy... Bollox and buggeration, do I have to schlep over to effing John Lewis again? It is enough to drive one to cake. Aha! "Driven to Cake: A Memoir". Or - "From Cack to Cake: My Saviour during the toddler years". (Hmmm. I think I may need to fall asleep again)

PS: please tell your agent / publishers / would be publishers that I - no doubt like so many of your readers - will commit to at least one copy of the Book of Cake.

Remembrance of cakes past is the clear winner here, no? Cruella is a genius.

When it was baked: my life in gateaux

Confections of a serial baker

Rmembrance if cakes past sounds brill.

Confessions of an English Cake Eater

I am shit at titles but I do like emmyloucarey's suggestion. I look forward to buying a copy.

Am I reading that right? - Fingers wants an Advent Calendar! Properly it should already be finished up by the time Pere Noel arrives, but he has the right idea. I liked the ones your friend is selling too.
Heather (NZ)

Cake in a Cold Climate...

Because isn't that what it's all about ?

Make no miscake
By misscake
No more heartcake
Cake off!
Thus cake Zarathustra

having worked in (U.S., admittedly) book publishing for lo, these many years, I do know that it doesn't matter one fig what you want to call your book. The publisher will pick the title, and you can live with it. Some authors who are quite the bee's knees CAN pick their own titles, but most folks can't.

So you can call it any darned thing you want now. And the funnier the better! You want to write something YOU would want to read, non?


Too bad,_I Was Told There Would be Cake_ is already taken.

Thank you all SO MUCH for the suggestions you are insanely creative and kind. I love you all. Heheheheheh Thus Cake Zarathustra. I hope your kindness will shame me into finishing.

(Heather: his list is for St Nicolas - 6th Dec - as well as Christmas, hence the advent calendar thing...)

for apps, there's the wolfram alpha thing, which is some sort of insane search engine of sciencyness, with additional complex calculating; there's a medline/pubmed thing that is actually a pretty nice way to get to articles, molecules is just fun, I really like chemdoodle, which is baffling since I am terrible at chemistry, molprime is fun and handy, autodesk has a whole bunch of engineeringish stuff - forceeffect and tinkerbox and 123d make.

We will always have cake
But I do really like Death, despair and biscuits too.

In other news: You've been nominated for a Liebster Award over on Singapore Tamtam! I hope you'll have the time to take a look :)

Katrijn - HA, my "holding title" has been We'll Always Have Cake (with Paris in strikethrough), so we obviously have similar thought patterns! Thank you so much for the award thingy, I go look xx

Light bulb moment! How about 'The Cake's Progress'?

Or you could go all Marie Antoinette and call it "Let Me Eat Cake".

Hi.
I live in South Africa and am sustained by the BBC Radio 4 Comedy Podcast which is obviously not an app but fills loads of time while ironing, present wrapping, filing etc.
There are also some great podcasts from America called "How Stuff Works" and I think they also have an app for that!
Helen

As Xtreme English said, whatever title you pick will likely get tossed by the editor, but I like Slice of Life, and Cake Walk. Good luck!!

Candace in the USofA

Cruella's is v good, but here're the ones that ran through my mind.

tobThis is such a great comment list.
How about "Let Them Beat Cake".. Good luck with it anyway. And I will buy a copy when you eventually publish.

French cake, Trifle Tower is my suggestion for your book.

Having My Cake and Eating It
Piece of Cake
Finnegan's Cake
The Great Cake Off
A Year in Cake
Cakes, I've had a few

Before you approach a loan specialist, you have to survey the estimation of your auto. The Kelley Blue Book (KBB) is a famous asset to decide an utilized auto's esteem. auto title loans chicago