On Friday I had a patisserie class in Paris from the man in charge of pastry at the Jules Verne at the Eiffel Tower. It is part of my attempt to fill in what I can only describe as "the shit bits" of my cake oeuvre (since I am in the process of picking it apart at the seams, I can't call it a book, even with inverted commas) with slapstick scenes in which I try to make complex cakes. I am doing a macaron class on Monday, and I can't imagine that's going to end well, is it. Thermometers make me nervous.

Anyway. Le Chef Patissier man was intimidatingly handsome as well as brilliant, the kind of handsome that makes you feel apologetic and self-conscious about your misshapen, ferrety form, missing buttons and smudged glasses. He stood in front of us and did impressive things with piping bags, and then we made chouquettes, and vine peach and verveine mini eclairs, and apricot and caramel Paris-Brests. Everything was beautiful and delicious, mainly because it wasn't a very hands-on class and the devastatingly handsome chef did all the work, after briefly curling a perfect lip at my handling of a piping bag. Then we had champagne and ate our creations, which looked like THIS: 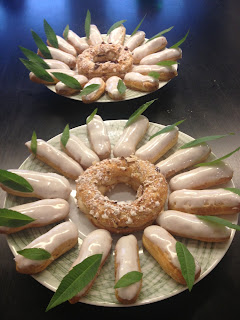 See the unearthly perfection? Everything about those neatly aligned leaves and that symmetry and the judicious dusting of icing sugar says "Emma did not really make us". I will never be able to recreate anything like this, ever again. Sigh.

Paris was initially very rainy, but in a dramatic, elegant way, then there was very fetching wintry sun and I sat and read a book on the Thalys whilst eating mini eclairs, head still slightly woozy from lunchtime champagne. Glorious. Predictably, Saturday was something of a come-down after that.

First, I receive a message from the children's science club.

"On Saturday ... we will be going to the part of the forest known as the Drowned Children's Ponds".

I swear this is true.

I go and collect them from Drowned Children's Pond after three hours of what I assume are improving, science related pursuits, but could frankly be fire-setting or glue-sniffing for all I know, in fairly insistent rain. Sometimes it has lightened up to a bare drizzle for as much as ten minutes at a time, but mainly it has chucked it down with apocalyptic intensity. I have wondered a couple of times, as I sit cosy in my bed during the afternoon, how they are getting on. I remember afternoons of my own in similar conditions: the Duke of Edinburgh trip where we had to wear binbags for protection. Woodcraft Folk Camps is sodden fields. Virtually all holidays with both my parents throughout the whole of the 1980s. When I arrive, they are all huddled under a tree not far from the car park, all wearing oversized fluorescent tabards. The man in charge has fat drops of rain clinging to the tendrils of his ginger beard, which has sprung into corkscrew curls. The uninitiated observer would deduce that they must have all been engaged in an intensive study of the tactile properties of mud. Lashes is as grey as his coat and extravagantly miserable. "He's been sulking all afternoon" says another damp small child. Lashes looks at me, huge eyes full of mute reproach, much like the weepette when I tie him to a lamppost outside the bakery.

"Ok?" I say, breezy to the point of brutality.

"Cold" he intones, funereally, then turns to trudge towards the car, arms held out stiffly from his body, zombie style.

Fingers, on the other hand, when I identify him in the mêlée of damp boy, seems astonishingly cheerful, clutching a sodden picture of a woodlouse and happily chatting. Possibly because his coat has proved to be waterproof.

"This" I tell them, with a tiny note of gloating, as I drive away down the bumpy cobbled lane, the windscreen steaming up, "This is how ALL MY CHILDHOOD went. Forced dampness in a non-urban setting. That's it. You've experienced my childhood now. Cagoules! Dubbin! Slivers of Mars Bar doled out parsimoniously by my father every 2 miles! My brother asking what the signs of stage two hypothermia are halfway up a mountain!"  I am ignored, rightly.

The rest of the weekend is taken up with questions about laser pointers (no, me neither) and watching terrible cookery shows, of which a special mention for the hideous, lunatic weirdness of "Sweet Genius", where people have to make puddings at high speed under really bad lighting while some kind of Swiss Nosferatu figure tries to make them incorporate frozen waffles and Fabergé eggs and twigs and hoof oil into their "creations", then sneers as they fail; and "Cupcake Wars" which is just proof that we are living in the end times, with its "chocolate and caviar" and "pickle and peanut butter" and "salmon and caramel" flavourings (I have not invented any of those). I dread to think what the steely chef would think.

How was your weekend?
Posted by Waffle at 16:36

I actually made an 'ooooooh' sound (in Duke Humfrey's library!) when I saw the cakes. Most excellent. Very much looking forward to your cake book, yesyes. Good luck with the macarons. Have you been enjoying the Great British Bake Off?

We had similar rainy/hiking childhood experiences... I remember one particularly memorable occasion in my teens - when where we'd been on holiday upon returning to school, my brother airily announced 'Oh yes, we went to the beach on holiday too.' Dramatic pause. 'Lindisfarne.' Cue hilarity.

We were marched over hill and dale in all weather, offered the occasional tangerine slice, a handful of filberts and swallow of straw-tasting water from an ancient canteen.

Thankfully, I was raised by former city folk who never got too involved with nature. Or maybe since they had so many kids they were afraid to be alone in the woods with us. We were mostly sent outside because we were being annoying or breaking too many thing. This weekend I cleaned my filthy, disgusting hovel and went to lunch/apartment hunting with my mother-in-law. So there was quite a theme of pennance for my sins. Which I thought were already being paid for with the husband's unemployment (though freelancing, thankfully), the ongoing uncertainty about whether I get to keep my job and the worry over my own elderly and lunatic parents ever moving into their new house.

A payday credit organization may practice various alternatives to gather this loan:

•Sue you for the assets.

•Use a gathering office.

•Enter your points of interest into a terrible credit database which may restrict your ability to money/compose a check for business purposes. payday loans corona