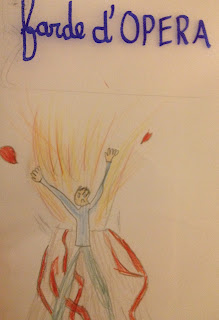 I have been to London, fought a partridge, drunk gin, got lost in Westfield, dealt with a flaccid mushroom and returned with 8 tonnes of Halloween tat and a chocolate Swiss roll. That makes it sound wrongly heroic, like Odysseus or something. SING TO ME MUSE, THE SONG OF EMMA, WHO HAS FACED THE PARTRIDGE AND THE MUSHROOM AND BROUGHT HOME THE ORANGE PLASTIC SPOILS. It was not like a Homeric quest at all. Mainly I sat in bed at my dad's and caught up with TV I had missed, and now I am back and the rats need cleaning out and no one has any clean socks, but I am not planning on any revenge slaying.

In my absence, Fingers has acquired an opera folder, featuring an angry looking stick character gesticulating in front of a volcano (see above. Guess the opera, I haven't got a clue) and instructions to go to 'opera day' every week with a towel (again, no clue). He was sent home sick this morning - despite being in apparent rude health, eating with the gusto of a young Henry VIII, climbing scaffolding and playing with matches whenever my back was turned - and at one point I came in to find him looking at the computer.

"No games if you're sick" I said sternly, trying desperately to make a grey Thursday afternoon in front of the fire with a sleepy dog, Come Dine With Me and a pack of Tunnocks teacakes not look like complete heaven.

And so he was. He was watching plasticine, well, for want of a better expression, cake fillings, perform La Traviata (here, utterly odd and rather lovely and oh my god, the YouTube comments. I wondered why an admittedly charming, but surely minority interest, bit of classical music animation had nearly 2 million views and the comments reveal it is because it features in Fifty Shades of Arse).

Later, he sidled up to me, laser pointer grasped tightly in his fist. Laser pointers are the dernier cri in boy fashions presently.

"Oh? I don't know any of the words. Apart from, you know, la donna e mobile, whatever that means. The woman is mobile? Flexible?"

So he sang, slightly self-consciously, laser pointer bobbing in 3:4 time:

(I like too how the translated English version I found online sounds like a Victorian doctor, or Daily Mail headline: "Woman is unstable")

Apart from the predictable ideological unsoundness of 19th century opera lyrics, I am rather enjoying this whole thing, and it is forcing me to up my game significantly, in cultural terms, thus tonight instead of watching chef-based cruelty on French Masterchef, I am listening to Verdi's Requiem, so that I know what it sounds like (oh, it's that! The dog is hating it, he would rather watch Frédéric Anton insult someone's gougères). Thank you, gulag, for your forcible programme of family cultural improvement. It makes me want to join a choir again though, so now I am back furtively googling and wondering if my fragile (= pathetic) psyche can take a sight reading test. I would love to go back to singing.

Apart from that, I am feeling strangely gleeful about impending winter at the moment: huge books and camphor scented baths and fires and cooking of things involving brassicas and béchamel (not together). Is reverse SAD a thing? The last two summers I have been quite, quite loopy with anxiety and then winter comes and the world does not end and I can feel busy and purposeful, like some kind of unfortunate looking Beatrix Potter creature (I don't think a naked mole rat ever featured, an oversight on Miss P's part, I feel), beetling away and laying down stores and fixing things (until a large rat comes and wraps me in pastry, presumably) and generally glorying in the hygge-ness of it all. Cashmere. Tea. Wood smoke. Pies. Some kind of hideous fictional murder to enjoy.

Of course it will not last - it is not actually cold yet, and I have not had to walk the dog in December sleet and the boiler is currently functional and the fact that my boots have wholly disintegrated is not yet critical - but I am conscious that I am always the very first to say loudly if EVERYTHING IS AWFUL and you know, right now, everything is not.

I don't know whether it's some kind of in-bred peasant superstition or the dread of looking smug or being one of those femmes qui changent tout le temps, or just how boring it is to read about contentment or some combination of all of them, but I always feel peculiar drawing attention to the moments when things are really quite nice. It seems a shame. I finally managed to download 400 photos that had been stuck on my phone for the past year yesterday and watching them flash on screen for a second each, I was struck by how many of them made me smile. Ok, a disproportionate number were of hairy legged donkeys, but there were also children in false moustaches and with long tanned limbs wrapped in towels, Satan, skiing (not Satan skiing), M in the Jardin des Plantes, bizarre handwritten signs in our neighbours' windows and lots of incredible hotels I got to go to for FREE and lunatic Belgians on horseback jousting in the middle of car parks and a really, really, hilariously terrible piece of craft that Fingers made that looks like a glittery poo in a box. Have I showed you that? Look: 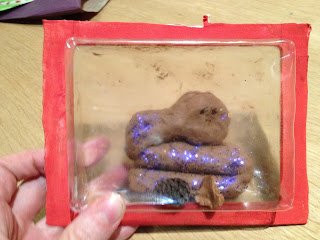 (I also realise that every time I drive past the Pet Funerary Transport shop, I take a shit picture of it, but that is by the by. 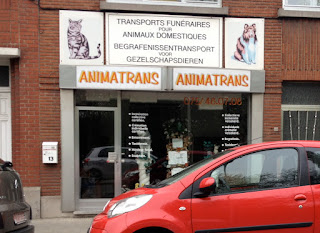 There are 53 identical ones in my pictures folder)

What I mean is, there are lots of really, really good bits, and acknowledging them, really enjoying them, doesn't mean they will all vanish in a puff of acrid smoke. Anxious as the thought makes me, I think perhaps I should embrace, celebrate the good bits a little more.

OH GOD I FEEL NERVOUS NOW. Is that a volcano I can hear behind me?
Posted by Waffle at 23:49

WHEN can I expect to be able to wear my lovely new cosy winter coat, pray tell Weather Gods?

I have the same unfortunate mental tic. "But if I'm unhappy and worried then nothing bad can happen!" it sounds insane when you say it out loud but in your head it makes all kinds of sense. I wish I had a solution. Maybe you need to make the photo of the Glitter Poo
your screensaver? It is freaking glorious.

Wait--what? You fought a partridge?

Yes - what of the partridge? And the only classical thing I can think of that features a volcano is Ravel's Bolero, but that's not an opera...

"cooking of things involving brassicas and béchamel (not together)"

But what about cauliflower cheese?

Yes, cauliflower cheese is fine. I had bad visions of sprouts in white sauce.

Margaret/Mrs Jones - despite already being dead, it put up a vicious fight. I came out the loser. Also Margaret - ahahhaa - WE ARE BROKEN IN THE HEAD.

Paddy - I hear they are threatening 24°C today. Tsk.

I read that you had 'fought a Porridge'...I was both mystified and impressed.
"Ahhchaaa, Porridge! *Splatch* take that!"

I always enjoy popping into your site because it's always - and I do mean ALWAYS - unique and highly interesting. Today I had to look up hygge, and found that it is Danish for gezelligheid, the Dutch cultural obsession for coziness. Who know? (Other than you, perhaps.) Thank you for my vocabulary lesson, images of Verdi opera and French Masterchef, and contemplation of the possibility of reverse SADs. By all means, celebrate when the little bits aren't so bad.

Joining a choir....just think what fun it would be to sing with other people! if you've sight read before, practice a little and go take their test. if you blow it, you'll have another topic to write about. good luck!

The opera illustration...could it be Faust and the "gates of hell"?

Everyone needs a poo snake. You must save it, and when heis thirteen and easily embarrassed, take it out...the reaction may be worth it.
Apropos of not much, I will confess to having gone back at least six times to look at the owl in a box. Thank you, thank you for giving us a boxed owl.

The exchange esteem (at some point equivalent to the discount estimation of the vehicle) will be the most educational when you're looking for a title credit. Loan specialists will factor in this estimation to decide the amount of that esteem they will loan in real money. auto title loans chicago

Nice thoughts with great helping content. I have also been seeking such thoughfull content to learn and appy in the life. We have also created such type of content on our site. You can refer out site for more ideas.
Happy New Year 2019 Wishes Messages Sms in Bengali
Merry Christmas 2018 SMS, Wishes, Messages, Greetings in Bengali
Merry Christmas 2018 Wishes Messages in Marathi,funny christmas text sms

Awesome article for all the readers very nice content..

Hi,
Your article is very informative and has a lot of information. I really like your effort, keep posting.
hungrysharkevolutionmodapk

this article is actually a nice one it helps new internet viewers, who are wishing in favor of blogging. Why viewers still make use of to read news papers when in this article is presented on net?

Great information for new guy like me. This shows not only particular heck but also give idea about. Thanks for sharing this information. How to download instagram videos free

Amazing!!! I like this website so much it's really awesome.I have also gone through your other posts too and they are also very much

appreciate able and I'm just waiting for your next update to come as I like all your posts... well I have also made an article hope you go

through it.
Happy New Year Wallpaper