I have been to my ancestral lands for the weekend, which means I am currently 40% bacon, 40% alcohol and 20% refined carbohydrates. I was attending the wedding of B, much loved acerbic, hilarious baby animal lover formerly (and greatly regretted) of this parish, and his also very funny and charming paramour, the Great Scot.

I never get invited to weddings. I am not quite sure why, but I think it is a combination of:

Whatever the reason, it means I get unfeasibly excited on the rare occasions I do get to go to one. Champagne! Strangers! Dressing up! Well, I didn't enjoy the one where I was sitting next to a mercenary, but APART from that one, I love weddings, and this one was a corker. The venue was gorgeous, as were a freakishly disproportionate number of the guests, the grooms were both magnificently kilted with thistly corsages and incandescently happy looking, the ceremony was very moving, the speeches a brilliant combination of hilarious and moving, and the Ceilidh dancing by the combined New York/Euro/Scottish contingents, erm, approximate. I used to have to do Scottish country dancing at Quaker summer camp, but everything but the vaguest heel-toe had completely deserted me. We did 'slithering', 'stamping' 'going the wrong way', 'banging into people' and 'whirling around out of control' instead, which seemed to work. I particularly liked the bit when, after several rounds of punishing dances, there was a tea, bacon sandwich and cake break. All exercise regimes should incorporate such an incentive.

There were also some great outfits. Most of the men wore full Highland regalia, even those from places like Munich and Poitiers and New York who had never touched a sporran in anger before. I especially liked one pair in not-quite-matching-but-highly-complementary chic grey kilts.  The women wore shiny dresses (even I was, for once, quite pleased with my outfit: stripy silk assymetric dress from Rützou in soft greys and blues and pinks that I have owned for 3 years and worn once, violet Ferragamo sandals, and a Sara Berman opera jacket thingy I bought online in a fit of stupidity even more years ago and had never worn. I have not seen a picture of myself but in my HEAD it looked good and that's already a massive improvement on any of the other 4 times I've left the house in the past year) and there were a lot of Louboutins and sequins and the odd hat and all was astonishingly beautiful. It did reminded me how terribly I miss B and the Scot though and those of us left behind in Brussels without them vowed to try and meet up more often.

So that was the wedding, and it was brilliant and grown up and delightful and I wish them both a long and blissful union, ideally one during which they are both constrained to return to Brussels for several years at some point. 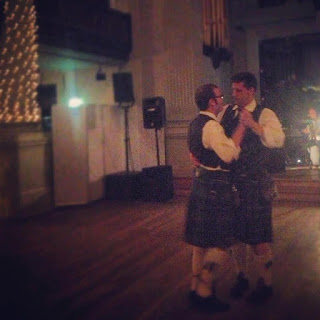 Other than that, the ancestral lands seemed in very fine fettle. There are a lot of shops in Glasgow, aren't there? I know that sounds odd, but really, there's very little I ever want to buy in Belgium, whereas Glasgow seemed a dangerous palace of retail delights. Not even exciting, independent, artisanal delights, just glorious mundanity like a giant Boots and department stores with make up counter ladies who don't try and chase you off with rudeness and supermarkets that open on Sunday and until 10 at night and sell you painkillers and cheap chocolate, and places that sell greetings cards that don't make you want to go and live in a cave for the rest of your life. I mean, I realise that on balance it's probably a good thing I live somewhere where I'm not consumed with retail lust all the time, but it was nice to bask in the welcoming warmth of Boots three for two offers on vitamins and Nurofen and the like. Also: Poundland. Franchises I wish to take back (or rather, wish someone else would take back) to Belgium: Boots. Office. Poundland. I ran amok in Poundland's Halloween Crap section, trying to buy bat deely boppers, light up lollipops and, mystifyingly, a fake sleeve tattoo for some child or other, then I had to have a stern word with myself and leave (I think I get a bit over-excited in Glasgow because everyone sounds like they're probably a member of my family, so going home with some cheap orange plastic tat is better than trying to shove several people I have convinced myself are my cousins into my suitcase).

The next day I went to visit Elsa who, knowing exactly what would fill me total hysterical joy, came to meet me off the bus with a ferret in her handbag. Badger, the ferret, was extremely sweet and funny and I was even allowed to hold onto his lead as he ferreted his way through the foliage to Advanced Staring from all passers-by. 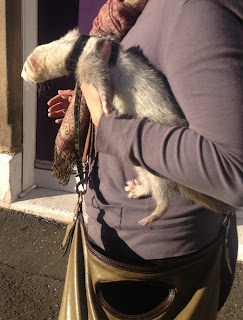 After Badger, there was delicious CAKE and EWOK. This is Ewok, yawning. 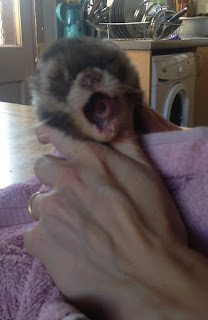 And here he is looking totally charming wrapped up like Samuel Whiskers. 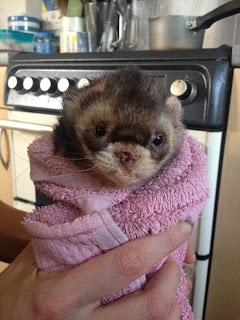 (Elsa and her family were completely lovely and welcoming too, especially given I basically invited myself along to her home-slash-petting-zoo without really asking if it was ok. But you know, there was a tiny ferret wrapped in a towel, and I am not made of stone)

After that there was venison shepherd's pie in Edinburgh (good), and Satan O'Leary's Megabus of winged death back to Charleroi at 6 this morning (very very bad) and now I do not really feel like a human at all, so I will stop here and return with my profound thoughts on Belgian electoral developments very soon. Have you seen Antonia is blogging again? IMPORTANT NEWS.

How was your weekend?
Posted by Waffle at 22:15

A spot of crying but not a lot. Apart from that, grown up activities like venison, claret, long walks and a decent movie or two. Finished book by political economics guru and alderman Assar Lindbeck. Unsure if why I read such things. It's rocket science.

I had the usual weekend: grading papers, doing laundry & grocery shopping, faffing around on the Internet. Absolutely no ferrets in bath towels, though I did discover Call The Midwife, which is almost as good.

Practical (by some definitions) question: do you know if there are Poundland-type stores in Paris? I am spending a month there next summer on a very limited budget and expect to need cheap junk that I will not feel bad about leaving behind.

When we moved to our sterile high-rise apartment in Seoul last year, we had to leave our dog with my cousin in Canada, and have been pining for animal contact ever since. I regularly shame my family by trying to interact with all of the tiny dogs wearing jackets, sunglasses, and bootees that you see in purses and on bejeweled leads all over the sidewalks of the city. I recently learned that there is a cat cafe' in Seoul, where you pay a cover charge to sit and drink bad coffee and pet cats for as long as you want. The only drawback is that the cat has to come to you- you can't just grab it (which goes without saying, since it's cats we're talking about.) This means that the cats will all come and sit on my husband's lap while I look on in silent envy. But at least I will have something furry to adore. I envy you the ferrets.

I can't speak of my weekend--everything is vaguely unspeakable these days. BUT, I am consumed with envy that you got to sit next to a mercenary at a wedding. Was it a real mercenary or just a pretty girl looking for a sugar daddy? I hate weddings, find them boring and terribly mostly (I'm from Long Island, so they mostly are). But a MERCENARY? I would pony up with an expensive dress and a Cuisinart for that, I tell you what.

Also that tiny, sweet ferret in a towel? I am grabbing my angry little cat and squeezing her just thinking of it.

My weekend was NOT close in any regard whatsoever to the delights of your men-in-kilts wedding. No, no. And no. Here in the states we just suffer suffer suffer through the turbulent HELL of this endless election. i honestly don't think my nerves can stand much more of it. Now Romney has pulled ahead Consequences dire Plus spent weekend recording godawful romance novel. The brave indian brave and his star crossed spinster ladylove suffering together in a cave. If by suffering you mean having really tedious sex every four pages well, yes then, they are suffering. I certainly was.

You could not have looked more beautiful or been more delightful and we could not have been happier to have you join us (though would it have killed you to borrow a ferret, dressed it up in jaunty wedding garb (FERRET IN A FASCINATOR) and brought it onto the dancefloor on a leash?). It was loads of fun. Thank you, E.

If I am not mistaken (and I almost never am) that was the lyrics from a song by Charles Aznavour in the late 70's, non?

excellent post! and thanks for the tip re Whoopee!!

Andrea - HA. Indeed. One of Chevalier's later classics. Sung over a baby grand piano to a ferret in a fascinator.

The wedding sounds lovely, and then tiny wee ferrets! In towels! Brilliant post.