I am achieving nothing today, but I can't just give up and write something here instead, because that would feel like cheating. Instead, I am posting this, something I wrote months ago for a project that never happened. The idea of the project was to tell a series of stories about clutter: what the flotsam and jetsam of your life, present but barely seen or piled up or tucked away, says about you. I quite liked this one that I wrote this about my sister's hospital bracelet. 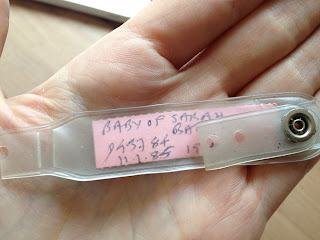 On my desk, there is a green tin box that followed me home from my last job. Inside there are a pair of scissors, several sachets of pepper, a roll of sticky tape and seven packets of coloured document flags, relics from the final weeks of that job, where I thought I that the shock of redundancy could be attenuated by stealing boxes of coloured drawing pins. Since washing up on my desk it has further acquired a Kinder Egg toy tricycle, one of those plastic clips for closing cereal packets, a selection of felt tip pens in unpopular colours, the business card of a man who sells Maseratis I spoke to once three years ago and a deflated orange balloon advertising a bank. There’s a lower sub-strate of coloured drawing pins, single staples and escaped pepper I generally avoid.

It also contains the handwritten pink paper and plastic wrist tag issued to my sister when she was born. ‘Baby of Sarah Baldwin’ it reads, though no one ever called my mother ‘Sarah’, then the date and time of her birth.  When I take both cut ends and hold them together, the circumference is comically, unimaginably tiny: my sister is 27 this year.

I know where my own children’s hospital bracelets are: as is traditional in families, my eldest son’s is in an album, carefully preserved with the hospital card noting his height and weight, and a proud sequence of near-identical photographs; whilst my younger son’s is stuffed in a plastic bag with congratulations cards and a lesser bundle of pictures somewhere in the corner of my office, guiltily noted from time to time, never quite transformed into an album.

I don’t know how my sister’s got here, but I know where it came from: the tiny hexagonal raffia box that lived on the chest of drawers in our mother’s bedroom, where she kept both our hospital bracelets, and a selection of our baby teeth – tiny bloodied shards like voodoo accessories. I remember the musty, hippy shop smell of it, the faded red star shaped design on its lid. I suppose when we cleared out her bedroom, it must have washed up accidentally in the pile of things I kept, with her red silk scarf, her handbag, a couple of jumpers. I can't remember what my sister took: hardly anything, I think.

I didn’t like my sister when she arrived. I was ten years old when my mother went into labour and my father came to take me out of the way, to the country: I remember sitting in a damp armchair looking out over the bleak January Dales landscape, sodden sheep and muddy fields, and hearing I had a sister. “Half sister”, I would correct, angrily, for years. Her pregnancy had been both a shock and a betrayal, and acquiring a de facto stepfather left me stunned with fury. I simply hadn’t seen it coming; I had met my sister’s father, yes, but hadn’t for a moment imagined he might be a rival for my mother’s affections. We had been alone together for years and she was all I wanted, and all mine. I was extravagantly displeased with the baby: there’s a picture of me holding her shortly after she was born and you can see my brows knitted, my hands unwillingly around her, slack with distaste.

I came round, gradually, and now my mum is gone, they – my sister, my stepfather – are my family; they are home. I grew to love them slowly, almost against my will, sharp edges rubbed smooth in the careless routine of daily life. Then, when she died, I loved them harder and more urgently, with the intensity of grief and need. I discovered a hard knot of loyalty towards them that never shifts now. They are mine.

They are quite alike, the two of them and nothing like me: gentle, tolerant, inclined to see good. My sister makes me laugh, remembers things no one else does, loves my children fiercely. She forgives my short temper and my failure to pick up the phone, makes me feel connected when I threaten to drift into isolation. I see parts of my mother in her that I emphatically did not inherit: the gentler parts, the ones I miss most, actually. The cataclysm in my ten-year-old life now helps keep 37-year-old me afloat.

Holding the tiny bracelet in my hand, I wonder, momentarily, whether I should put it in an envelope and send it to my sister, to whichever of her many addresses – Paris, Copenhagen, Edinburgh, London – is currently working. But then I think of her propensity to lose everything that passes through her fingers, the drawer downstairs filled with her forgotten cables and nail varnish and single socks, her peripatetic life, and I know I won’t, not yet at least. Nor will I send it back to my stepfather for whom possessions are like dust, who lives so much inside his head that a physical prompt or relic of a memory is unnecessary, of scant value.

Because I think someone should care where your tiny pink wristband is: someone should want to preserve the ephemera of your arrival, treat it with reverence. My sister should have that, and she does. I have moved her bracelet to the small Liberty paper box in the drawer of my bedside table, where I keep my children’s milk teeth.

What a delightful commentary -- has me thinking about some of the misc. items I've collected and why I retain some of them.

Thank your for sharing this. It's really beautifully written, as I'm finding that most of your writing is. It makes me think of my niece, who is 10 and will be gaining a new little sister today (hopefully). Sisters are meant to be special and I hope that hers grows up to be as special to her as yours became to you.

This is lovely. It's what family is, or should be. Beautiful words, and clearly more gentleness in you than you think you have. x

Adding another voice; beautifully written, so well phrased. It's a shame this project never went ahead, sounds as if it would have made interesting reading.

That was lovely - now I don't feel I am sad for collecting such ephemera. I have both my daughters' bracelets - they both say FI then our surname (Female Infant). And I have their milk teeth, along with the note from the elder to the Tooth Fairy apologising for having swallowed her first tooth.

Sweet, Waffle. So expressive. I will not find such inspiration in my own flotsam and jetsam, but it makes me want to look. Nothing I've kept will be as evocative. Nice.

So lovely, as is the feeling behind it.

Thank you for posting this piece of writing. Just seen my younger daughter into senior school and watched her big sister hang back to look out for her. I hope hope hope they look after each other in the future.

Love this. I feel verklempt that I have none of those infant bracelets or baby teeth from my own children. When I was very young, our neighbors on 4th Street North had everything: the mantel over their fireplace even had a row of gruesome green bottles of darkish bloody solution in which floated each family member's appendix and tonsils. Our family never got to that stage...not even close. I did get to keep the foot of the first squirrel I shot, though. Gone now.

You have a rare, rare talent. Your writing goes straight to the heart. Just beautiful.
anon.one

"Half sister”, I would correct, angrily, for years

My sister is also 10 years older than me. We are now 40 and 50. She is still correcting to "half sister". And it actually hurts every time.

If you encounter any kind of sort of difficulty concerning this issue over the iphone Viva Video APK Download for PC & Android Free/Pro Editor App The easiest method to turn your photos right into film work of art.