Having left you for some weeks with a vision of me gently flaking into oblivion while dressed in old newspapers and afflicted by an advanced case of mange, I feel duty bound to provide some scrap of new content to displace this career-enhancing image. I am not actually saying it is inaccurate, mind, merely that there are other facets to me and to this blog. Also, I am woefully short of work, so god knows, there is regrettably little to stop me. I have recently sent a significant proportion of my cake "book" to an agent and my main activities can be summarised as follows:

- convincing myself it is shit and unsaleable (I am really good at this);
- convincing myself that it is actually a book about something completely different and requires total rewriting;
- pointless unfocussed anxiety about everything in the world;
- writing unsuccessful feature pitches or trying to think of ideas for more likely-to-prove-unsuccessful feature pitches;
- fighting with children about homework;
- wondering if I can justifiably watch another episode of harrowing police drama "Good Cop" in daylight hours without succumbing to terminal self-loathing or indeed terminal be-harrowedness.

There are surely better things.

In my absence, we have, for instance, missed the extended media polemic about Bernard Arnault moving to Uccle and thoroughly lowering the tone with his Picassos and private Bahamian islands. Whatever my ideological objections to this kind of fiscal bastardry, I must be practical. A vast amount of ready €€€ has just moved in up the street and one day I would like to own a pair of Isabel Marant boots, a miniature Shetland pony or indeed merely 'the wherewithal to pay my 2011 tax liabilities'. I would like to assure M. Arnault that I am available for all types of consultancy and advisory work he may need in my core areas of expertise: Anglo-Saxon cakes, opaque hosiery, Emile Zola, EU cartel law circa 2008 and capybaras. Get your people to call me, Bernard. I can blow your mind.

We have also missed discussing the exciting siege situation over the bakery round the corner, when a man unhappy about a parking ticket barricaded himself into his flat and shot three rounds vaguely in the direction of the street before, well, giving up and coming out. Before he did so, a crowd of several hundred people came to stare at precisely bugger all, as I can bear witness as I had to walk past them several times. Did you get that in Paris, Bernard, eh? Bet you didn't. They were giving away free sweets on the trams too this week! The RATP is more likely to give you a free tazering or some free criticism of your trousers. (Admittedly, Bernard has probably never heard of the metro, or if he has, believes it to be a creature of myth, half hydra, half minotaur).

We have also missed me dropping my iphone down the loo and having to perform the traditional 72 Hour Rice Resurrection Ritual, to surprisingly good effect. It is not quite as it was before, but I am willing to overlook the failure to work at less than 70% battery and occasional fits of temper because it is not dead and I do not have to go and get upset in the Mobistar shop again, which was not fun for anyone on any of the previous sordid occasions.

We have missed La Rentrée, with its usual ridiculous load of self-adhesive plastic film to swear at, large and fiddlingly precise sums of money to be provided in envelopes, forms to be filled in in triplicate with details of grandparents' blood groups and distant relatives' criminal records and darling cheeldrenne to send off to school looking by turn mutinous, indifferent and slightly apprehensive. Thus far, Fingers has cried about his dictée, Lashes has already come home with a giant page of red angry teacher scrawl, and I have had to learn YET ANOTHER SODDING MAURICE CARÊME POEM, so all is much as ever. 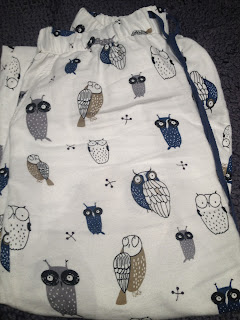 Veritas. Very cheap, very fluffy. I only went in there to buy self-adhesive velcro strips for a Dutch textbook (don't ask). And you can try and tell me owls are passé, but I will just pretend not to hear you.

You will doubtless be relieved to hear that we haven't missed absolutely all the fun. This weekend is the St Job Agricultural Fair, and I am really quite excited, since it promises a "Exhibition of Remarkable Cats", a horse whisperer, the "Fanfare Don Fiasko", a treasure hunt and a competition for Le Chien Le Plus Sympathique. The Weepette, as befits a former prize winner (First Prize "Dog the Judge Would Most Like to Take Home With Her"; Third Prize "Dog With the Waggiest Tail", Cherington Flower and Produce Show 2011) will be entering, even though I would not necessarily consider "sympathique" the most accurate descriptor for him. "Tourmenté", perhaps, or "Profondément fatigué". Viz: 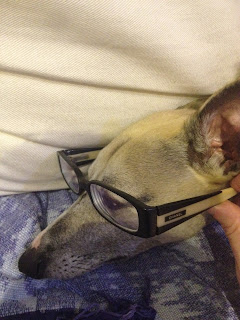 I think it would be accurate to say that the only one who is at all excited about this event is me, but I am not allowing that to be any obstacle to enforced agricultural themed jollity. I promise to report back more promptly this time.

I want the jim-jams! Where exactly in Brussels is Hema? Going there on 10th Oct with not many minutes to spare.

Hi Cruella - I was wrong, it's Veritas, not Hema, but it's a chain! There are loads of them! Owljamas can be yours! I have put link in the post.

Oooh, eternally grateful! I looked up Hema on the net and was assaulted by a huge amount of noise and jumping graphics that I couldn't stop since I know no Dutch. No owls.

AND - you modest thing you - there was also you looking very lovely indeed on the front page of the Guardian's Weekend section(above a brilliant article) Which, I'd like to point out, bore no resemblance WHATSOEVER to the creature you have recently portrayed yourself as. In fact, you looked really quite chic. Bit disappointed however that the photo wasn't taken on the streets of Uccle.

IT WAS taken on the streets of Uccle! A year ago, but still. It's not like they change much. And thank you. xxxx

But... where were all the loons? It looked positively... normal. I like all the crazy Belgian traditions. We have similar disparities in our house. English upbringing with staunch Irish & Swedish parents. ("It's not called "fun", it's called "craic". And you're not allowed to have any in any case. And no, there's no word for it in Swedish. Just eat your pickled herring Christmas dinner for god's sake or else the teeth trolls will get you")

Reluctant, but we have LOADS of kul in Sweden! Especially in parliament today what with budget debate and all.

Ah, the St Job fair! And the rentree search for classeurs in off-piste sizes, how I miss it ... or maybe not :)

Congratulations on that article - I opened the "Family section" and shouted "I read her blog"! Even better - it continued into the spot where good old Oliver James used to write, ha-ha!

Missed the Grauniad article, must be molto exciting to have your face in the paper!

I am very glad you have not flaked into oblivion, and I am sure the cake book will be hilarious.

However I may need to steal your pyjamas. You are 'on-trend' - owls are very 'in' this season, which is 'early autumn', apparently. Oh yes marvel at my fashion knowledge. I wonder if you read Domestic Sluttery? They too love a good owl...

This is Waffle at her very best. Will reread it not only once.

cruella - I could guide you to the Veritas closest to Schuman if only you let me.

Was just reading about feuding masonic lodges shortly after Mexican independence, and came across the term Yorkinos. Um, that's all that's new with me.

Wonderful pjs!! I don't have a single owl on mine, and until today, I never felt the lack! they look very cozy.

Just found your Guardian article- prompted by comments above (had somehow missed it, normally we get the paper every Saturday and the Weekend Section is the most prized section, as luck would have it we had missed that week). It's a brilliant and thought-provoking piece of work on a fascinating topic. As others have said you should be very proud.. and absolutely not feel the merest shred of guilt about any amount of daytime TV watching etc over the succeeding month or indeed decade.. hell, I am sure I speak for many of us when I say if I ever get near the cover of Guardian Weekend I'm dining out on that for the rest of my life and handing in my notice for the dayjob on a matter of principle even if it means a life of penury.
Seriously- a great piece of work but of course those of us who have the privilege to read you regularly would expect nothing less from you.

Talking of owls and cookbooks I have just bought a 1970's Cadbury's Chocolate cookbook (for 99p in Oxfam) , by Hamlyn I think, with an amazing chocolate owl cake in. I thought of you when I saw it, not sure if i'm up to the challenge, there are some other quite amazing animal cake creations that I will probably never make but they made me think of you and your brilliant Guardian cake article!

Darn, I missed the famous Guardian family section, but congratulations on being featured in it. Your pajamas of great joy are lovely.

You can actually read it on the 'About' page if you are so inclined, Patience.

Jonathan, you are completely lovely. It was Family, not Weekend, though, so not quite as impressive.. But I am not knocking it. I was very happy indeed. And thank you.

Frau A: Yorkinos. Are we extra vicious? I really hope so.

I'd say better than vicious.