Today was a day of travel guide writing. These days usually make me irritable and headachy and never want to leave the house again. It's one of those jobs that is much easier if you are methodical and structured and keep good notes of what you've done in the past and what might be useful in the future. My current reference document looks like this: 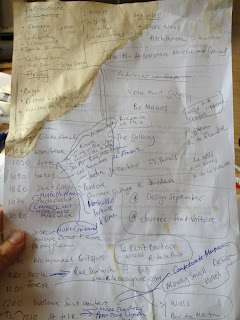 At least I have one, I suppose.

One of the tasks involved is choosing 4 areas of Brussels and selecting shops/hotels/restaurants/cultural stuff/nightclubs (yes, this is my favourite) in each. I realise it is hardly a Nigerian sawmill type of task in hardship terms, but it does have its challenges. Today, for instance, I chose to write about one area, did lots of research and writing about it, then stalled because the only shops I could find in the whole postcode were Lidl and Speedy Pneus. I lost some time idly composing travelguidespeak recommendations for them.

"With its unapologetically bright frontage, Forest Pneus draws the rubber enthusiast in off the street. Inside, there's a vast range of artisan moulded tyres at surprisingly affordable prices, and warm, personal service from knowledgeable staff".

Then I wanted to punch myself in the face. This kind of thing happens a lot. I also got rather too involved in checking upcoming gig listings at Forest National. October brings the twin joys of Katie Melua and Nicky Minaj, whilst November  promises an audacious mix of Johnny Hallyday and the Worldwide Wrestling Federation Smackdown. If only they were on together, I could get behind that combo.

I can do no better, I think, today, than to translate to you from Wikipedia what is going on in Liège this week, Liège being the other guide subject on my list currently (I have not actually been there, well I might have been once years ago, but I forget. I am going this weekend, and now that I know the kind of thing that awaits me, I will board the train with considerable trepidation):

"The burial of Mati l'Ohé (Mathieu the bone in Walloon) is a burlesque ceremony which brings to a close the 15th August festivities in Liège ... Mathieu the Bone is a ham bone, as his .. name suggests. The ceremony is accompanied by the lamentations of numerous female mourners, who wave sticks of celery in the place of bouquets ... Guy Reynaerts has been the official carrier of Mathieu the Bone since 1981".

You can watch a video of it here, if your mental fortitude is the face of Belgian folklore is particularly robust.
Posted by Waffle at 20:00

That reference document looks exactly like the net product of my working day today, right down to the coffee stain.

My mental and indeed physical and psychological fortitude in the face of Belgian folklore are all laughably feeble, so I will leave commenting on the YouTube clip to readers with sterner constitutions and more daring dispositions.

This has to be the best title for a blog post, ever.

That is another truly weird and wonderful example of Belgian folklore which I find strangely fascinating! Thanks for sharing with us - does the hambone represent anyone in particular and why is everyone sad yet somehow triumphant in the celery waving?
Heather (NZ)

I understand, Heather, that the ham bone represents the end of 15th August Virgin related festivities (ie. there is no ham left). I realise this makes little sense.

And why celery instead of flowers?

Good luck with the travel writing! I hope you get to go to more places like Domaine de l'Ardoisiere.

Please, Waffle, I deplore you - write a guide book on Brussels and Belgium, please! Write about quirky Belgian festivities, and tyre shops. There are so many people who come new to Brussels all the time, and who have an acquaintance here already, and the acquaintances would all buy that guide for the newcomer. You've written half of it already on the blog, so it would just take a bit of... a bit of... organising...

Like all good children, I find folklore both terrifying and incomprehensible, so I will pass.

Bwahahaha! (I'm so eloquent, I know)

I read your post. I agree the insights and appreciate your job. Thank you for this different job. Keep up this posting.

I've view your video . I too Had this type of experience friend.I agree wisdom and appreciate your the job.

I'too had this type of experience gamin retrobut. I also watched your video it was nice. retrobut handsoff to your job

The Post Seems to be very much Different I really gather lot of information From your Post,Good stuff