Yesterday - stupid, boiling hot, itchy, midweek European public holiday when I had UK deadlines - was greatly redeemed by discovering a cake shop I did not know existed, and which was - gasp - open. I can't pretend it's new, because apparently it's been open 7 months, but yay. WELCOME, Nicolas. 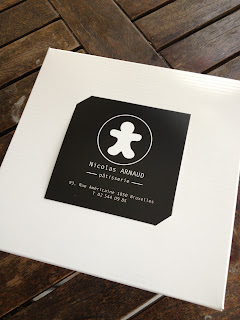 (Hmm, now I wish I had had the foresight to do this in the manner of a dweeby fanboy unboxing video, but I was too busy filling my face with cake)

God knows, we need you, cake guy. There are very few good bakeries in Brussels. I am sorry Brussels, but you know what I say is true. There is the Saint Aulaye (run by French people). There is Charli (run by a French person). There is Fabrice Collignon, who I believe may actually even be Belgian. There is Wittamer, I suppose, but who wants to pay eleventy thousand euros for a microscopic mousse even if it is by royal appointment*?

(Gloriously, whilst trying to link to Wittamer, I discovered they did an Olympic range of cakes. AMAZING. I especially like the lightning bolt "Eclair Olympique". I am sure Monsieur Bolt eats a heap of passionfruit pastry)

Ditto, Pierre Marcolini. You are truly excellent at chocolate, M. Marcolini, and also slightly frightening so I do not want to get on the wrong side of you, and your vanilla eclairs are ze bombe. However. You are only one man, swimming against a tide of stodgy wrongness. Also, you are amazingly dear. Please don't hurt me.


Whilst Belgium does loads of food things very, very right, there are some bakery things that Belgium does very badly indeed. Baguettes, for one. The supermarket ones are better than bakery ones, which is a sad state of affairs. Flan, (the French set custard tart) too, which comes in Belgium with a brown, spongy, leathery skin of wrongness on top and a floury, dense texture reminiscent of those sachets of chalk they give you when you have an upset stomach.  Croissants. Brrrrr. Belgian croissants are an abomination, and do not tell me to try your couques au beurre, because they are even worse. Also, that thing you call a 'bolus', that charred ball of raisin studded wrongness that looks like an internal organ? WHY. What has the honest pain au raisin, with its soft, yielding, custardy centre ever done to you, Belgium? Do not try and fob me off with your "couque suisse", that is just a dry, angry danish pastry, with all the fun removed. It would probably make good loft insulation.

The dog was not particularly impressed by the Fraisier. He is a harsh judge of patisserie. 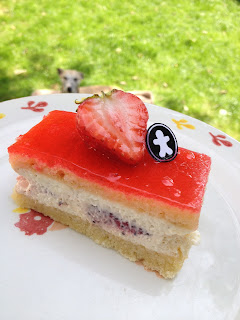 I thought it was slightly too sweet, but basically pretty good. It is supposed to have poppyseed syrup, but that was subtle to the point of wholly elusive. That top layer was a bit too gelatinous for my liking, as if it might develop consciousness in the manner of Bob from Monsters v Aliens and ingurgitate me before I had the chance to kill it with a fork.

Then there was this lurid green number. The dog looks ever more pained at this one. I think it offends his aesthetic sensibilities, he is more of a classicist in matters pastry-related. Possibly it was because he had stolen and eaten a chausson aux pommes and was feeling bilious. 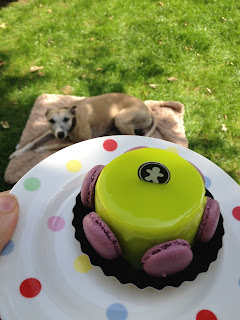 It is called "Mr Smith". I don't know why a cake should need an assumed name as if it were checking into a hotel with a person who was not its wife, but there we have it. "Mr Smith", is a sort of apple mousse, with a cassis-violet centre. The cassis centre was excellently, lip-smackingly tart and there was no trace of the violet because the cassis had stamped all over it, laughing cruelly. The apple tasted a bit like synthetic apple sweeties. Not a total win then, but I ate it in approximately four seconds, so I can hardly get snotty about the 'balance' or whatever. Look, here is a hideously graphic picture of it all demolished and bleeding, OH GOD NO I CAN'T LOOK. 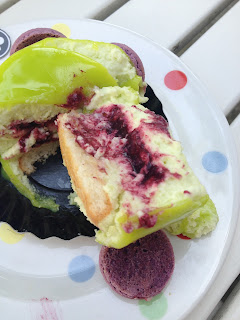 Ha.  That is so unappealing. Try and Instagram THAT. Listen, it was hot, ok?

Drawing a veil over this green slimy carnage, most excitingly of all, they do petits choux which are quite the thing at the moment, and very much the new macaron.

Also, they call them Choux de Bruxelles which is amusing (because it means Brussels sprouts). Approved. This one is raspberry and violet. 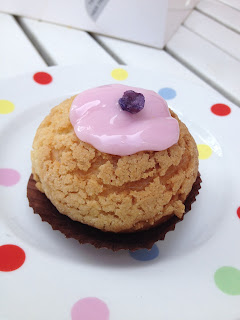 It had a nice moussey texture but it didn't taste of much. There were a couple of caramel ones too. There aren't anymore, because I had the last one for breakfast, having hidden it in the crisper basket in the fridge to protect it from marauding infants. They didn't taste of much either, and I think they are slightly too big, really, but hey, choux buns hit Brussels, I am not going to split hairs, do you know how long it took us to get bagels? DECADES, my friends. I had to learn to make my own and everything.

I will return, to buy more cakes, and place my face into them. I advise you, with caution, to do the same. Now I must go and lie in the dark and clutch my stomach for a while.

Mme. Jaywalker, you must allow me to tell you how ardently I admire and love you.

My boyfriend (who is Dutch) moved to Brussels from Oxford a couple of months ago. This means I spend a lot of time on the Eurostar, and have been reading your articles in the magazine without noticing your tagline includes this awesome blog. Situation rectified! Verr verr funny.

On the subject of flan, please can you explain to me the one with the rice in it? The Dutchman loves it. I am perturbed. It's not like it has enough rice in it to be like rice pudding, just enough to forget about it and then suddenly go ohmygodthishasbitsinit. Oof.

As well as being ludicrously flattering The Drinker, for which much thanks, you raise an excellent point. WHY, Belgium, do you consider it appropriate to put a rice pudding IN A PIE? I am sorry for all the capitals, but, you know. Wrongness. I have no answer. Also: not all cheesecake need contain speculoos. Just, Eff Why Eye, Belgium.

(I am talking to Belgium in my own comment box. It's been a long, wearisome year already. Sorry).

And speaking of speculoos, why does this dull, boring cookie find its way into all other desserts in this country? Speculoos ice cream... WRONG. Speculoos tiramisu... WRONG! Ewww.

YES ANNE. YES YES YES. Say no to the tyranny of speculoos!

I've always been slightly wary of this cake shop on account of the part of the window display dedicated to extremely ugly children's cakes. I knew the macaron's time was over when they started to be used as wheels on cake trains. You should offer to revamp their display!
It's my dream to open a cake shop on the Schuman roundabout 'United in Patisserie' - the sign would be the EU flag, with custard tarts instead of stars. As it is, it's a cake wasteland around here.

Is it just me (possibly, brain is not very functional en ce moment) or does his little logo man look a bit like the White Stuff logo character? No? Okay.

My best address for cakes is DEBAILLEUL in Rue de Bailly. This is my weekend pleasure routine!

If you need a baking assistant, Alice, count me in!

I agree on the Speculoos. As a biscuit, on the side of a coffee, I accept you. But stop inveigling your way elsewhere. I do, however, always think of L'homme du Verre in Amelie inviting her in for Speculoooooooos whenever I see it. Just me? Ok.

Ooh and also also Patisserie Renard near Flagey is the place the Dutchman goes "for a good tart" (!) but not, alas, actual cake. I usually get folorn requests to bring him care packages of carrot cake.

Find De Baere Ms Waffle, do.. but not on Saturday or Sunday, they queue out of the door, which is very boring. (One Christmas they had a 4ft high ice Angel outside to wish everyone a Happy Christmas, I am rather partial to their bagette a l'ancienne - the last two days, it has been warm, and if you fancy dying over breakfast, brioche aux amandes works well..they put chocolate creme patissiere in croissant too - bit hard core for me, but my boys like it. Oh, and pain surprise as hedgehogs and alligators...)

So, let me get this straight, a speculoos (loo?) is just an animal cracker? Or is it more of a graham cracker? Is it crushed up in these "desserts"? (Desserts are nice cakes with chocolate icing or gelato with one of those tiny chocolate-filled cookies or a brownie with a bit of vanilla ice cream on top or blueberry pie and whipped cream.) Are they using crushed speculoos as the crust for cheesecake? That is so very wrong: Ask the Italians. One of our local Italian bakeries made an AMAZING Italian cheesecake oh lordy I would kill for a slice of that right now. Also, a beautiful NONCRUSTED New York-style marble cheesecake.

NYC went through a big Japanese petite choux fad a couple of years ago, which my gigantic waist is very happy has ended, but, oh, while it lasted. Magic.

That baker need a stylist or something so he stops making neon-color gelatinous toppings.

I got off topic somehow...but I am so glad you're back! Will Facegoop be returning too? I've been buying wildly expensive skin care products of dubious merit with NO GUIDANCE whatsoever.

I thought Belgium did all things patisserie FABULOUSLY??
Gutted.

Can we give the speculoos a rest? Occurs to me "Mr. Smith" could be a subtle reference to what we know in North America as Granny Smith apples. Although why a Belgian patissier would seek out une pomme unfamiliar to our Waffle seems to defeat any attempt at gastronomical in-jokes. I could be wrong. I like Portuguese custard tarts.

It's looks delicious! I bought nectarines, raspberries and blueberries today with plans to bake a pie...and maybe a crumble cake. Definitely have to up to walking now