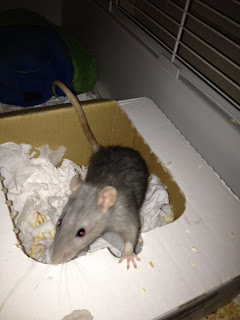 Over a hundred books moved to create an rat-proof barrier.

Two and a half hours sitting motionless in the (empty) bath in the dark.

A small saucer of yoghurt.

A second escape inches from the cage.

And finally, FINALLY, that is defeat you read in those beady eyes. Not permanently, I fear, and not without a hell of a fight. I had to transport him back to Lashes' bedroom in a plastic box with a towel over the top and he still kept launching his determined little body at me, trying to find an exit. He has tasted freedom. He will not renounce it easily.

We have gone to London and left him and his co-conspirator to think about their behaviour.

Now my Samurai mission is over, I have been able to sleep for more than four consecutive hours and just conceivably, I may be able to move on to non-rat based topics. I imagine we all hope for that.
Posted by Waffle at 21:28

Glad to hear you have caught both rats without being committed to a mental ward!
I feel your pain, I spent five years working in a pet shop and my boss was horrific for forgetting to shut cages properly haha.

OH GOD E. Glad the Fugitive has been banged up again.Hope you put it in stocks and threw rotton cherry tomatoes at it before getting on the Eurostar.

it's not easy to catch those suckers if they don't want to be caught. yay!

Congratulations. I'm glad the "sectioning" threatened in the previous post did not happen.

Rats have been renamed Molesworth?

I had a tegu for 9 years. Not once did he escape. And the boyfriend who got his finger broken completely deserved it.

My dogs are slaughtering squirrels like they get paid for pelts. I am intermittently convinced that they're trying to either actually give me the plague or give me a nervous collapse via hypochondria. Squirrels are crawling with fleas, did you know?

Good job, Samurai. I love the way he has one paw placed on the edge of the box - freedom is too great a lure to go down quietly.

Enjoy London! You deserve a break after The True and Thrilling Tale of The Rat-Catcher.

Actually, I've loved reading the rat story in the last couple of days. I recently found your blog and each post has consistently been making me laugh! Glad I found it. :)

This is Belgium said...

Make the little bugger swallow a strong magnet. Think how brilliant the next recapture will be and the hilarity at the expression on the ratty little face. It'll be worth letting him out!

A three person pincer-movement - Ah, yes, I am acquainted with those!

Oh, and dismantling and newly mantled kitchen, footboard by footboard, to find one beady-eyed mischievous ratty who had decided to secrete himself away for the night...

And the two of them that we are care-taking are geriatric rats!

You have a whole lot of fun ahead with those young 'uns, Waffle, for sure!

Loving the ratty tales, by the way.

very cuteeeee! Thanks for indeed!.

Gotta say -- that is an evil looking rat.

I was intrigued by the books mentioned earlier, then -- somehow I became seduced by the rat tails/tales -- whatever! Glad you caught them -- ah, the significant matters of life.

I'm reminded some years ago my children requesting they be allowed to accept the pet rats of friends who were moving and had "so generously" offered them. Thank heavens, I said "No!"

you are kind! offering the tempty yogurty treats. my last encounter with ratty found me sat on sofa all night with a plank of wood to bash it over the head. it was a rubbish plan. rats are not idiots. they can see certain death when it looks like a plank of wood. but a tidbit would have been a sly, more cunning solution.