Amuse your children, the gallo-roman and sawdust way

So on Saturday we went to Liège, home of the people who bury ham bones whilst waving sticks of celery at them. It was 35°C. I made the children visit some very extensive gallo-roman religious remains, which they enjoyed enormously as you can imagine (actually, that is unfair, they were very game, considering it was basically a dark corridor with some old dusty bricks in). We also saw the world's largest post-it picture, which I cannot pretend has left an indelible impression. It was some bikes, I think.

I took only 3 photographs: one of a café liegeois: 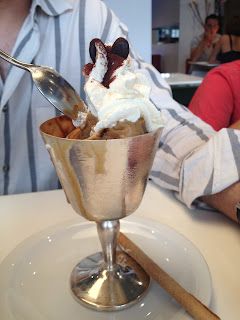 (It was very good indeed. Franchi's gelateria opened in 1890, fact fans, and even though they have been going twice as long as my local, Zizi, the staff aren't nearly as hatchet faced and world-weary)

one of the eldest with his hand on Georges Simenon's thigh (he asked me to take this): 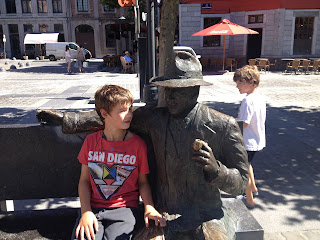 and one of some people queueing to buy ham: 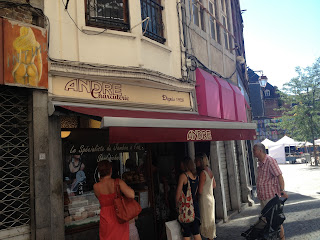 (No, no idea. It made perfect sense at the time)


I think the heat got to me. This is going to be the best city guide ever, ahem.

Then yesterday was doomily predicted to be the second hottest day on record in Brussels (I believe the hottest was the day we moved in in 2006, which was a delight) so we barely moved at all. We cancelled tentative plans to go to the open air swimming pool which is patrolled by a man in jack boots with an Alsatian and instead took the dog to Belga and made him wear a silly hat: 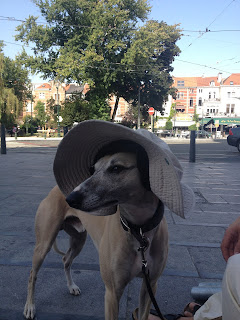 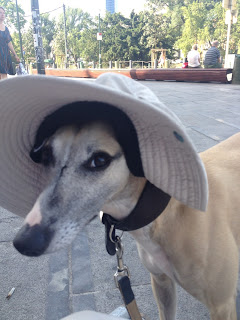 For the remainder of the day the children mainly amused themselves inflating, then sitting on water balloons. It was nicely peaceful, if messy. This is the kind of thing children are supposed to do, isn't it? Mine tend to want to stay very, very close to me at the moment, clawing with their sweaty, gnarled fingerclaws and asking whimsical questions about death and echidnas. Yes, I know I will miss this dreadfully in a few years, but well, you know.

Anyway, I am now paying for this brief interlude of peace, big time. After very limited sleep due to furious, hotness-induced wee-small-hours angsting, I have been trying to finish two pieces of work which are due today, whilst optimistically hoping that the children might see fit to "amuse themselves". They must have been out of water balloons, because their amusement has consisted of filling seven cardboard boxes with a mixture of ripped tissues and sawdust, the spreading the contents across the bathroom and letting the rats loose.

The rats promptly found a tiny gap in the exterior cladding of the bath and ensconced themselves in there. There they remain. There has been weeping (Lashes'). There has been swearing (mine). There has been taunting (the rats) and stupidity (also the rats). There have been death threats (mine again). There is no scope to even put into action the Chief Scientific Advisor's hamster catching technique perfected in my childhood, as it requires the ability to dig a hole in the floor. As I write, I am about to go and take up my nighttime vigil in the bathroom, guide to Liège half-written and wholly incoherent, Petit Filous Tube in hand to try and coax them out, and rodenticide in my heart. Of such things are the school holidays made.

Here is Fingers drinking out of a hip-flask belonging to my father in the park, presumably in training for his future as a hobo. We blame the parents. 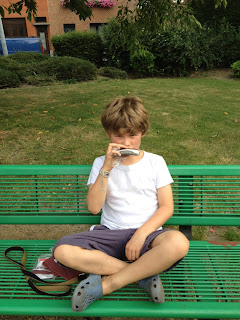 How would you amuse these children tomorrow? Or alternatively, how would you remove two semi-feral, delinquent teenage rats from a hole in the plumbing?
Posted by Waffle at 21:00

My super-duper, CANNOT FAIL method of hamster catching (also applicable to rats) is to put very tempting food in a bucket, then prop a board up against the bucket, so that that rick'in', frackin', GD rodents climb up the board, jump into the bucket to get the tasty, tasty food, but then cannot escape. You may need a metal pail for rats. Hamsters do not have sufficient body weight to tip a plastic bucket over, but rats may, especially if there is more than one. Good luck!

Suggest a long tube like object with a cage at the end butted up against the wainscotting.they will run in the tube( because it's dark) and be trapped in tha cage before you know it.

Could also try that for the rats.

I think I might take the tube/cage option for myself actually Scunder.


WoD - this is a variant on my dad's method. If I don't catch it tonight, tomorrow we buy a steel bucket. OH THE GLAMOUR.

And I thought trying to get through this heat wave by just eating and drinking was hard.

Tempt the rats with something more their size...
http://snowfern-clover.blogspot.nl/2012/03/petits-filous-in-1-24.html

As for the children, frankly, I'd expect the one with the hip-flask to amuse me.

Ah, visits to ancient things was exactly what my childhood was made of. Good times. (That and pushing each other off things.)

I think the most useful thing the children can do is recreate the cafe liegeois.

Sunshine, in Brussels? Two weekends in a row? What next!

Thanks for sharing the blog.Keep on update the blog.

Nice blog! thanks for sharing the blog,keep on update the blog.