Happiness is a Warm Donkey 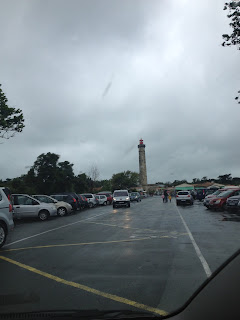 It is pouring. Cagoule weather. Except, of course, I do not have a cagoule, or indeed any coat at all. My sister-in-law always laughs about this when we are on soggy holidays together (usually at Tetanus Manor, my father's health and safety challenged country seat). Despite a childhood of holidays spent ENTIRELY in boggy, windswept fields with nothing but a damp Milky Way between me and some kind of Dales-based Captain Oates scenario, a rebellious, wilfully blind streak prevents me from packing or dressing sensibly. This holiday has been no exception. I ended up on a (non-voluntary, of course) long walk yesterday in my slippers, because I had not thought that SHOES might be advisable.

(Incidentally, I should perhaps mention that this is not a real blogpost, merely a collection of photographs of donkeys. If you are OK with that, stick around.)

Before the deluge started (30 hours and counting), then, we FINALLY went to see the donkeys in trousers* (*the donkeys, not me. Well, I am always wearing trousers presently, due to the sunburn). The memory of it is keeping me going through the long, trying hours of watching the rain batter off the derelict garden furniture, playing 'Cockroach Poker' (of which more at another time), re-reading La Bête Humaine (cheery stuff) and saying "JUST KEEP AWAY FROM EACH OTHER" and "DON'T GET ME INVOLVED" and "Why don't you go and see if those German children are around, no it doesn't matter that you can't understand each other, just wave a ping pong ball at Johannes, he'll get the message?"

Worse still, we went on a desperation induced "trip" to the Ile de Ré lighthouse (pictured up top) this afternoon and walked up three hundred narrow vertiginous steps with many jolly, racing, laughing, cabin feverish children on all sides, to go and stand on the outside, scary bit in high winds. The good thing about the high winds was that no one could hear you whimpering. It was even less fun than visiting the Grace Darling museum, and that's saying something. Actually, scrupulous honesty requires me to disclose a massive, puffin-based longing to go back to the Farne Islands, even though my abiding memories of our field trip there are cagoules, exceptionally rough seas and being attacked by irate terns. Give me another couple of years and I will be viewing 23 hour car trips to go and sleep in a candle-lit bothy in a peat bog as an attractive recreational activity. When this happens I will be enlisting your assistance to shoot me like a rabid dog.

So: donkeys. This is Leonard, in his trousers. His nose was extremely, ethereally soft. Also, I have rarely encountered a creature this stoic. 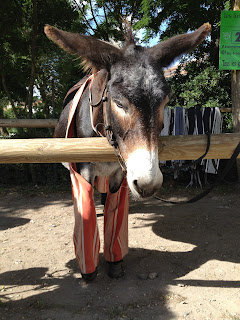 This is Galopin, who looked for all the world like a dehorned Highland Cow. Seriously, can you believe this thing is for real? Galopin? YOU ARE NOT REAL. 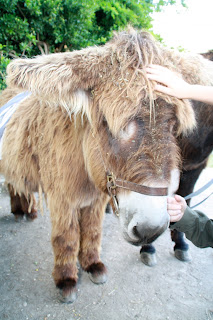 This is my eldest son removing burs from his (not real) prehistoric hairdo. And look at that sign! Only €2 for a donkey ride, which, and they don't even tell you this, is unaccompanied. Solo donkeys! I could have just taken Leonard and ridden for the hills (that might have taken a while since the highest point of the Ile de Ré is 20 metres above sea level and Leonard's natural gait was, well, stately going on funereal). Yesterday my eldest son also tried to smuggle two frogs onto the Ile de Ré in his pocket. The pocket you can see on that picture, except "I have filled it with water". I see, how resourceful. Now put the frogs back in the river, darling, eh? 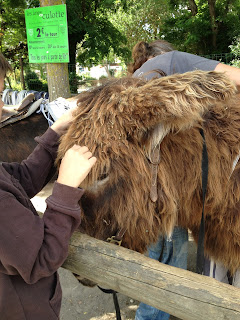 These are Galopin's legs, pre-trouser. They are rather ... odd legs, aren't they? I think he looks a little like a person in a horse suit. Or a centaur. I keep going back to this photo and STARING. 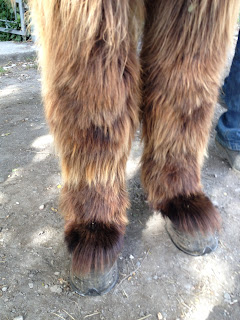 I told you he wasn't real.


My younger son's donkey, 'Dagobert', was not terribly inclined to stick to the signposted 'Chemin des Anes'. We had to try and remove him, again and again from a patch of long grass he had spotted in the middle of the park. He had little interest in listening to reason or gentle persuasion. Here he is, heading off again. 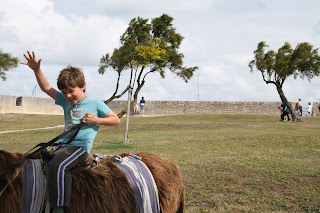 M said, on seeing this "that is the happiest photo of you I have ever seen'. I was indeed very happy. I didn't expect to be allowed to actually SIT on a donkey. I thought it was a children only kind of thing. Perhaps it was, but they took pity on me. Leonard didn't seem to mind much. 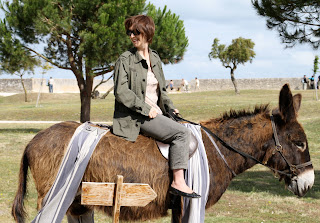 Oh, but I do like a donkey. Here I am again, liking a donkey. 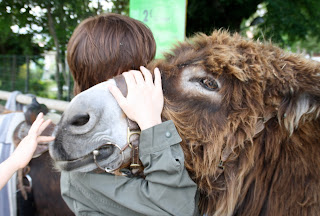 Do you think he looks slightly nervous? Is there a sort of silent entreaty creeping across his usually impassive features? I'm not sure. It might be a trick of the light.

So: progress on Ark of the Covenant limited, but I think we have donkeys and frogs (x2) covered. Over to you.
Posted by Waffle at 23:57

I do see a silent entreaty. He is thinking, "take me home with you, nice lady."

Love the donkey's furry legs. They are extraordinary.

for halloween, i want a pair of donkey trousers.

Hurray, you're back again! The donkeys are definitely asking to go home with you, you can just tell from that pleading look in their eyes. It would also be a complete one up on the weird bench man in pavement Olympics, which must be a consideration...

Why are the donkeys wearing trousers?

It's hurting my head, trying to work out the answer.

teh donkeys look good in trousers.

d'oh. see earlier post. teh trousers are for the flies. ok.

You always make me laugh out loud. Yet another brilliant post.

I also keep on going back to that photo and STARING.

Laughed aloud at the idea of heading for the non existent hills on a donkey of doleful demeanor.
No I did really. I'm not just being nice.

You're right. Those hairy donkey legs DO have a strange, magnetic effect. Must look away, can't look away. Arrrrgh!

happiness is a warm WAFFLE! that is, your delightful post! wonder if we have anything like that here? probably not. it's too simple and too much fun.

Number one: nice try Waffle, those are SO clearly your legs clad in faux fur, look at the delicate ballet-ish fur shoes and the shapely legs!!

Secondly, yes your donkey has a look in his eye and an expression of almost malice, he is about to turn and it won't be pretty, be warned!

Those are the best legs ever. A bit like mine over a non-shaving winter but a better shape.
Lovely to have you back x

I think your donkey is enjoying the hug, but is unnerved by that little pokey finger on the nose!

I think your donkey is enjoying the hug, but is unnerved by the little pokey finger!

Sorry about the double post - damned WV! I am not a robot, but can't read gobbledegook.

This is Belgium said...

Found you in the Eurostar. Glad to discover.
Anni

Ha! Words cannot express how much I love our Burro Boyz; they are like big slow dogs w/lovely soft ears & hard feet...
100% trustworthy w/any & all children, even ones w/no farm experience whatsoever.
(Need to post some new pictures yes I know)