The sun turns my corner of Uccle into an outpost of Twin Peaks. Weird, dislocated happenings. A faint air of menace. Even early in the morning, the parc du caca simmers with a hot haze of bioeffluent as the fat black staffie with jaws wider than its shoulders drags its diminutive owner round the bare patchy grass, her sandals catching on the pebbles of the path, Glen Hoddle perm bobbing. An early rising toddler is lurching forcefully around the fenced off play area with a stick, watched by a hunched shouldered, pinched faced parent, slumped on the seesaw in exhaustion. Somewhere, someone has already started drilling. Every part of the commune is being implacably dug up for reasons that no one can identify with any certainty. Escaped parakeets screech from the chestnut trees and a semi-feral cat in a cardboard box on the corner shop windowsill is shifting, economically, to catch the sun right on the sweet spot on its scrubby back.

In the street, Monsieur Cambier (85), in his summer outfit of promotional baseball cap c1984, promotional Leffe t-shirt c1979, shorts and ancient New Balance trainers, is jogging effortlessly up from his home to the corner shop to meet the delivery lorry, skinny white legs pumping. He unloads 25 palettes of Jupiler (a week's supply) and a single box of iceberg lettuces.  The hairdresser - 'Coiffeur Masculin' reads the sign, just in case there were any scope for doubt, which there isn't - is readjusting his window display (still set to 'spring' - balding flock bunnies, green crêpe paper, faded butterflies, dessicated twigs) and unabashedly scoping out the neighbours, collecting incidents, twitching his curtains. 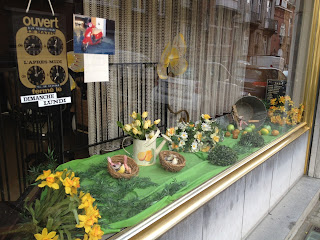 Later, I walk down to the "shopping" street. Both ice cream parlours - twenty yards apart - are chaotic with ice cream seekers. 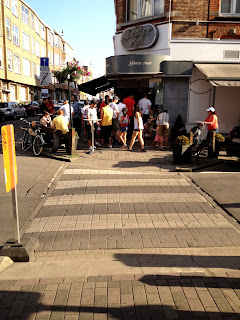 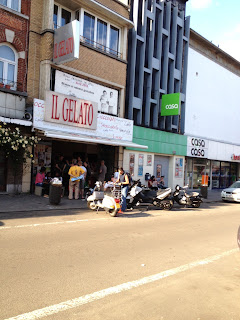 The opticians has opted for a window display of a reclining nude male mannequin, on which it they have placed a variety of pairs of sunglasses, in a manner vaguely reminiscent of Manet's Olympia. I end up walking behind a man who is pulling a veritable train of small wheeled carts, filled with rubbish. 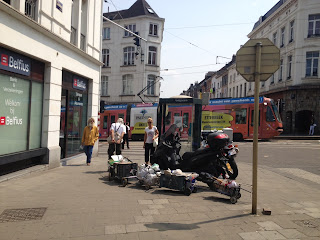 In Colruyt, a little further away, chaos reigns. There is a three for two offer on packs of 24 cans of Jupiler and the word has got around. The queue stretches right back to the frozen food section and every trolley looks like this: 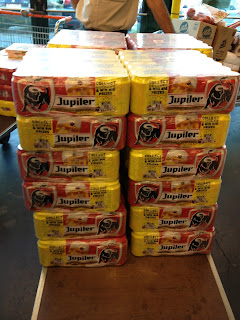 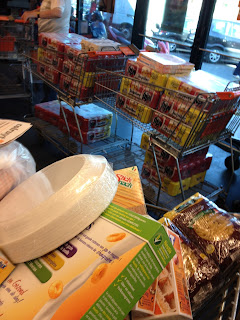 (I don't know how these photos have ended up stuck together, but I can't get them unstuck. I'm going to pretend it's deliberate and artistique, like)

Back home, dusk is gathering, still stiflingly warm and dusty and the skinny boys with falling down trousers and muscular dogs on strings head to the parc du caca to ostentatiously smoke microscopic quantities of cannabis. The Reclusive Neighbour, owner of the Bench of Crazy, has moved out into the middle of the (fairly busy, poor visibility) street. He is holding a tennis racket in one hand and fiddling with something on the floor. I slow right down to get a good (discreet) look. The thing on the floor is a sort of brick with a hole in it, and there is a length of string attached to it. At the other end is a tennis ball: has built his own swingball set. He stands, swinging at it hopelessly in the sunset - it is on the ground. The string is not elastic. There is no hope - and I wonder, yet again, quite cheerfully, how the fuck I have ended up here.
Posted by Waffle at 22:36

Who cares how--it looks most excellent. I want to move there. No one in our parc de caca is EVER smoking anything even slightly interesting, god damn it.

Strange people! Ice cream! See-saws for sagging parents! I might have to reconsider my stance on never wanting to live in Belgium.

Rather wonderful, I'd say. Effortless.

When I move to Belgium I am bringing my nearly pony-sized standard poodle, and I will be wanting explicit directions to this marvelous parc du caca of which you speak so frequently and knowingly.

You make Uccle come alive in the 21st century just as the London had Virginia Woolf a century ago.. ice cream-afternoons and cannabis-evenings are upon us, thank you!

Your description of Uccle is so riveting that photos are not necessary, we get the picture!

It sounds like a kind of Mad Max wasteland of oddity and foibles, not to mention plain nuttiness - fascinating!
We have all either resided or visited places like this, I am thinking of going around with my Nikon and taking photos of the weird shops and establishments that you find outside big towns and cities. Currently on my odd list is 'Barnet Fayre' a hairdressers in lancing (safely 5 miles outside of brighton, so let the crazy commence!) It is in a little boulevard of other odd and dodgy shops and is almost an artwork in itself. Don't get me started on 'hair on Broadway' in nearby Shoreham By Sea!

I love the Spring window display in the barbers in Uccle, nicely sun faded now that Summer is upon us (that is provided the sun shines in Uccle!).

You have painted quite a picture. I want to comment on the homemade swingball but I'm overwhelmed by the concept of someone attempting to make their own swingball set.

OK....I've been THROUGH Belgium on the Red Train from Paris to Amsterdam. I love the IDEA of Belgium, and of you living there. I do love your blog. How are the rats these days??

please believe me when I say that Idaho makes Belgique look like the Celestial Kingdom. plus, you get to speak Belge, there. jealous!

Yes, how the fuck did you end up in Uccle? I am not sure I know why you settled there originally, was it to do with work? I know you were in Paris but from Paris and London to Uccle, please refresh it for us!

I can't help adding that as of today, there is a ginormous union Jack hanging from one of the houses in your shopping street (right opposite the GB, above the cavernous shopping gallery).

I never noticed it before, so I think it must be a Jubilee thing... I'm amazed.

That's Uccle for you ! But Uccle is also one of the few places in Brussels,apart from dodgy night shops selling material to smoking teenagers, where one can buy diet cherry coke and that's enough to make me walk all the way from that terrible place that is Maison Communale to the supermarket and back.

You know, this is really a little bit of genius. Someone should be paying you to do this.

Ha, Marion, I know! Next to Aldi. I took a picture of it. It seems to have gone now, so patriotic outpouring apparently over.

Where the fuck have you gone??

am mi sick of seing the Uccle title? please come back and post Waffle!

Where have you gone? Waiting anxiously for next post. No pressure or anything; it's just that Waffle is my late-night guilty pleasure and I've now read about Uccle five times.

Missing the posts. Hope all is well.

Fab article in the Guardian by the way! Now I understand where you have been and why we have been left with the Uccle post for ages!

I think most parents with boys have had or are still enduring that Thomas phase, the soundtrack ringing through the house day and night der der der der..... and all the merchandise, such suckers are we! But yes, some of my boys' first words were tender and buffer and of course the old classic, Thomas, you have cause confusion and delay on the railway is still used today in our household, mainly by me and mainly to be annoying.
I seem to remember my eldest, who is nearly 11, being terrified of that blue hoover thing in the Teletubbies, what was its name? was it noo noo, anyway I swear is was genuine fear and your article brought back so many memories of our life at that time, the ups, downs, unhappiness and stresses all played out to a Thomas and Friends soundtrack. Thanks Waffle!

Oh...off to google the Guardian to read your stuff, Waffle!!
Miss you...

Oh, I want so much for you to write a French lesson book. Even my teens, who are struggling through beginning French, would not be able to resist practice sentences like: "Votre train accuse un retard indéterminé en raison d’une collision avec un poney. (Pause) C’est un petit cheval."

Set up cheat engine application apk best computer game cyberpunk in your computer. cheatengine.me Within a couple of secs, application will certainly be efficiently set up in your tool.