I was going to do some economical post with a nice picture of some sweet peas today, since my brain is a dark, soup of despair today with various half-eaten dead things poking out of it (this also sounds like much of my culinary repertoire), but of course iPhoto is choosing not to comply, so you're going to have to make do with the shit, uncropped version and some bleak ravings. Them's the breaks, internet. Your flowers are uncropped today and there may be some light whining. Lodge a complaint with the weblog ombudsman, perhaps. 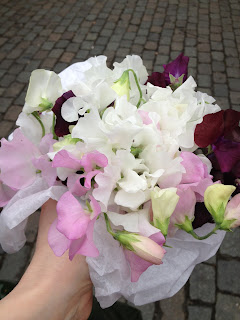 See? It is not the same. Anyway, these poorly framed sweet peas are from the lovely Sunday flower stall at the Sablon, which always has the most beautiful things, for the kind of life I do not actually lead. There were vast branches of lilac and forget me nots and green and white, crinkly parrot tulips and all sorts this week. When I am rich (so: never) I will go every Sunday and buy vast armfuls, then sit on the terrasse at the Vieux Saint Martin drinking €5 cappucinos and smoking sobranies, whilst my - new model, vastly obedient, brindled and beautiful - whippet dozes at my feet, occasionally accepting a crumb of palmier biscuit.

As it was, I put my nose in the sweet peas all the way to my friend's flat, when I forced myself to hand them over, with some difficulty (I was offered an obese mouse in return but declined). I first went to this stall about 12 years ago on one of my previous episodes of living in Brussels and it seems hardly to have changed at all since, which is both greatly comforting and no surprise whatsoever, knowing Belgium. I remember when we moved here I went on a wander round the neighbourhood and washed up in a pretty square with a nice sit in bakery which I gradually realised I had been to once before many, many, many years before during a bizarre internship in a cupboard, when someone sent me to the Ukrainian embassy to collect a visa. It had not changed a shred, except I was less lost and did not have to take six buses back to my cupboard where I was working on various things to do with firearms lobbying and gas pipelines I did not understand for approximately no money. Ah, happy days.

Welcome, then, May, with your wildcat public holidays commemorating things I cannot possibly be expected to remember, many of which may be religious. Today is the only one I was remotely sure about, but wishing my friend F a happy fête du travail today, she told me that in America this happens in September. How can this possibly be? How will international communism EVER succeed without a single day for singing l'Internationale and waving flags and making cakes in the shape of Trotsky? There are no lily of the valley in this house this year either, as Satan ate them down to their roots several months ago. The mid-week holiday has had its usual effect of making today feel like Sunday which would go some way to explaining the fetid brain soup if it hadn't been even worse the previous day. It is probably at least partially  'why am I no longer in a boutique hotel on the Côte d'Azur' related, so I should probably give myself a swift kick, followed by a throat punch.

1. My sister came to visit, which is always a bit like having some kind of shy, beautiful woodland creature in the house, one that sheds clothing and papers and nail varnish everywhere. And makes cups of tea and walks the dog. It was lovely to see her and not just because she walks the dog, honestly. I miss her when she goes. She reminds me who I am, on some level, some of the parts of myself I tend to forget. Jesus, that's a bit deep. Moving on!

2. Tomorrow, I think the whole of the neighbourhood's lilac will burst into flower and it will be the start of that magical week where the quartier smells of lilac instead of cooking oil from the Henri IV Deep Fried Meat Restaurant of Torment, dog shit and Jupiler beer. (What the fuck is this post? Gardener's World Goes Emo? I do apologise, it won't happen again)

3.  We are doing a cookery class at the weekend! It's here, at this place what I wrote about for the Yurostar which I totally love because of their lovely plates and 'eat as much as you want buffet' attitude to catering. It is quite dear, and I fear great humiliation as the children reveal to the nice ladies that everything I cook features either lardons marinaded in carcinogenic sulphides or breadcrumbs, but it must be done. We are doing a sort of 'Come Dine With Me' activity at home this week (more on this at a later stage it has been a spooling loop of hilarity since we came up with the TERRIBLE idea), and one person who will remain nameless has proffered a meal of oven chips, Hula Hoops and cucumber slices. The culinary ante must be upped, somehow. Trish was also teaching me how to cook, until I did something terrible to some pork with miso and had to stop in shame. I will get there, somehow.

4. Only 4 more days of blanket French presidential election coverage to endure. I have read a lot of dreadful but compelling detective fiction (the current one involves DEATH BY SNAKE and is amusing me no end) and had lots of baths, to avoid knowing any more about it. I don't think this counts as self-improvement, quite, but it's definitely self-preservation.

5. The fact that I wrote an article about a small Belgian town has made the news in the local paper of said small Belgian town, which tickled me no end. Now I have written about being written about writing about something, I have surely fallen into a bottomless pit of self-referential, circular nonsense from which there is no escape. This is a definite career high, possibly outdoing the time that I delayed an important merger filing by calculating the exchange rates backwards. 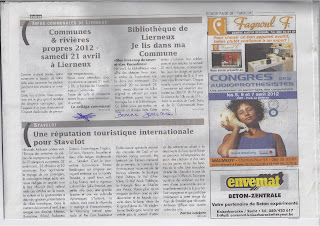 6. I thought I could manage six, but I'm going to let myself off enforced jollity and go and read about someone else being killed by a snake.

What's cheering you today, if anything? Or what kind of animal would you use as a fictional murder weapon?

Ooooh I would definitely teach a camel to headbut fatally.

For a moment I thought that was your foot nestling underneath the beautiful bunch of flowers. Do you see what I saw? An elegant blooming slipper.
Maybe I should go to bed before hallucinating further. That is all, BB

Nominated for a blogging award and a write up in a local paper--congratulations.

I can't think of anything cheerful right now. The highlight of my weekend was driving an ancient mercedes back into town from a third-rate winery with two drunk guys who were passed out next to me. At least Tuesday is over for another week.

"Labor Day" in the US is in September, but-- rather adorably in most parts of the nation-- our feeble "Socialist" party (some people in their twenties who are cross about their English degrees being worthless, largely, and a few Union Electricians) staged a General Strike today, bless their hearts. In Texas a few people did not go to work at their non-profit jobs; in Seattle many people, some wearing Nikes, broke the windows of Niketown (indifferent) and American Apparel (wholly approve). We try. It's just that we haven't had a left wing since 1933 so we don't know how to do it anymore. In Cleveland some people blew up a bank, but they'd already been infiltrated by the FBI or the CIA or something.

Ah. Well. What's cheering me? Should say all the typical things. Friends, family, no one important (I love) sick or full of despair. Or dead. But as you can see from bleak nature of comment all this not filling me with untrammeled glee. Perhaps it was all around the world just one of those murky unpleasant days. Perhaps.

The wildcat holidays have torn my nerves to shreds. Heart frequently on the verge of jumping out of chest, this probably either qualifies as cardio or fatal. Not in the mood for ruining the words murder weapon with the adjective fictional (this, actually, is why ferrets 'wish' they had my personality).

I'm surprised requested cake is not a Trotsky head, complete with ice pick, and Frida Kahlo (who lived nearby) theme...because nothing says badass like small pissed off Mexican women.

Don't tell Satan that lily-of-the-valley is extremely poisonous, he might die of the shock.

The only thing cheering me today is the fact that I'll have my second botox injection tomorrow. In my neck, to cure the murderous pain and birdlike tilt of my head. The fact that this will be about as pleasant as amputating a limp with a wooden spoon is not dimming my happiness.
Truth be told I'm getting to the point where I'm willing to offer sexual services to the person who will rid me of this pain forever.