Despatches from the foothills of the EU Fail Mountain

So I didn't win an award, but thank you so much for wrestling with the demented voting system on my behalf, I am really very grateful, truly. You are very, very kind and patient. I give you an award as nicest blog readers with a high tolerance of ornothological and equine trivia and complaining. Your prize is a further helping of mithering.

I wish I could be standing in front of you delirious with triumph and waving a small perspex cube, but instead I slapped several inches of concealer on my gigantic red nose of pestilence, went to an industrial estate on the fringes of Brussels and stood in a corner feeling like a decrepit, socially inept idiot in a room full of 23 year old bloggers, all for naught. Failure is supposed to be good for you, apparently, and a force for creativity, which is excellent news since I seem to have a dramatic surplus of it at the moment. I am the guardian of the EU failure mountain; its sherpa, if you will. I could pretend I don't care, but it would be a big fat lie. I was hoping for a shred of shiny win in this cold, wet spring of bleurgh and quasi-bankruptcy and now I am going to have to find it somewhere else, possibly in this family sized lemon drizzle cake by my elbow, or in a puffin cam set to a soundtrack of, I think, Radio Shetland. I just turned it on and they were saying:

"And we have trees. Which we are massively proud of".

The last time I listened it was wall to wall Scottish country dancing music. Amazing.

Anyway, I am massively bored of the contents of my own head (sinus gunk, self-flagellation, distraction, sulking, whyyyyyyyyy) and I should just be grateful I don't work in a Nigerian sawmill, so let's talk about something else shall we? Ideally something funny.

Here are a few things that have cheered me today:

Marc Jacobs' Met Ball outfit. Brilliant. I can't begin to imagine the thought process. 'I just didn't wanna wear a tuxedo and be boring', he's quoted as saying, which is an entirely admirable sentiment and I do not think anyone could argue that he has absolutely achieved his stated aim.

Katyboo's description of an awful avant-garde play she recently endured. "Everyone got undressed to the sound of random break beats operated by a guy with a Mac squatting at the back of the stage ... finally scrotum boar head got dressed".

Some incredibly stupid conversations with M, including one where we tried to form a hip hop duo, Phoolish and Fukkedoff and another where she tried to get me to use the phrase 'goat nads' as a motivational mantra and a third where we explored the possibility of writing a frightening French children's book about Satan's death (which continues to haunt my dreams), in the manner of these, collated by Jenny Colgan. Provisional title 'La Dernière Carotte'.

"You should write it. I will illustrate. It will be about the inevitability of death. And carrots. 32 pages. GO ON".


A trip to the Van Buren museum to see some sculpture. Ok, that one isn't even slightly funny, but the Van Buren museum was deliciously soothing. It is a perfectly preserved art deco villa, with stained glass windows and hand stitched soft furnishings, and it smells of the dust of ages and furniture polish and bourgeois comfort.

I took some fairly awful pictures. If you live in Brussels and you haven't been, you really should. It is far better than any picture of mine could convey.

Iffy photo of the interior, but gives an idea of the soft, dark patina of the place: 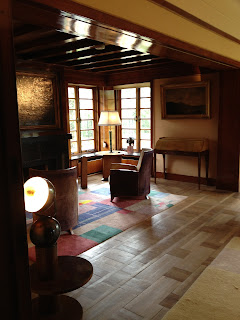 Detail of the curtains, apparently hand restored by a single craftswoman somewhere in the depths of Flanders: 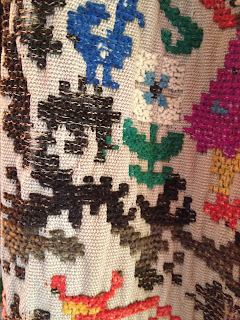 Parts of the exhibition, ineptly photographed: 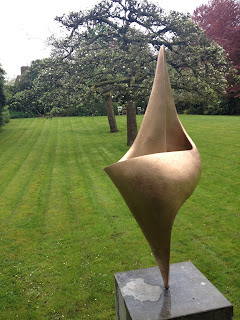 (It was pissing down which did not help in the slightest, but look how amazing the gardens are, in the middle of Brussels!) 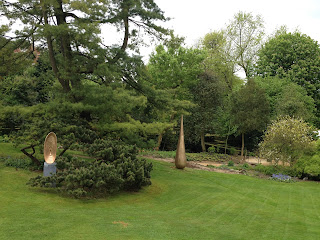 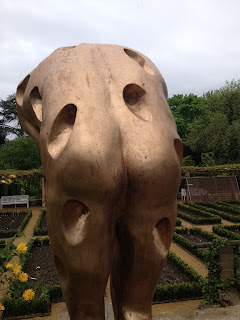 There is a lovely video of Tomorrow Man's twin, who lives on the sea front at Knokke, on the artist, Catherine François's website, here, below a great video of the installation of this exhibition, which gives you a slightly clearer look at the gardens.


This article about doing whatever the Internet tells you to for a day also amused me. If I did that today, I would:

- Stay in a teepee in Limburg

- Listen to someone called Brad Oberhofer (no, nor me)

You know, I am not even sure the Internet is wrong.

What does the internet want YOU to do today?
Posted by Waffle at 15:46

Thank you for the pic of Marc Jacobs, cheered me up no end.
Mya x

It wants me to turn it off and WORK. I however have other plans. And anyway, the contents of my head - phlegm, mucus, increasing terror at the impending inevitability of childbirth, vast swathes of self-pity, writer's block which is less block, more mountain - do not allow for anything other than a little weep, and maybe a snooze. I think I'll start with a weep and see how I get on.
BTW, you most certainly should have won the blogging award. Bastards.

Today, the internet wants me to:

I'm actually going to do the last thing. xx

Yeah, only in the story Satan is actually Roland Barthes. He's lived with his mother for sixty years, and when she dies he comes to eat himself to death in your garden. Kids love it when you throw 'em a curve.

Today the internet wants me to buy a pair of Marc Jacobs pilgrim shoes. I don't care if they're for men.

Thanks for the link to Puffincam and "the only Shetland Radio streaming live around the world by internet - 60North"! At their local time 23.40, there was an impenetrable but beautiful poem. I don't think it was entirely Gaelic because a few words of English filtered through the amazing accent. My husband claims an ancient family connection to the Shetlands, so I shall put him on to this - internet win!
Heather (NZ)

Going to St. Dogmaels. It will be raining.

Only Marc Jacobs can pull of a pair of boxers and a lace dress.

Trying to set a lunch date with a friend over Gmail. 'TOO FAT?' shouts a sidebar advertisement. 'BANISH BELLY WOBBLE IN 3 EASY STEPS' yells a presumtuous but sadly prescient other. Shut up Google, you massive wanker.

Make it a bilingual children's book. I was thinking Enlgish or course but maybe French/Dutch contains more inherent humor. Also that way you have to write half as much text because everything is repeated on facing pages. I would buy that book and send it to baffled acquaintances for Christmas.

I'm slightly disturbed by the fact that I predicted Satan's death in a comment to your 1 May post.
Tilia

And of course, there is the heart-breaking Swedish children's book about the death of a beloved guinea-pig, "Goodbye Mr Muffin". An extract:

Once upon a time Mr. Muffin was young, strong and proud. He could even carry a whole cucumber on his back! Now he’s old, grey and tired. He sits alone in his house reminiscing. He’s had a good life, better than most…

He makes a list.
1 very wise and kind wife;
1 little house with its own mail box;
4 furry little ones;
And sometimes mail in the mail box.

OH GOD. I cannot read this.

I am glad the boar head made you laugh. The bronze buttocks in the photo are much more soothing than actual buttocks. I stared at the bronze buttocks for several minutes as if hypnotised. I felt very calm and then I read about Mr. Muffin. Now, not so sure.