I'm a bit hopeless this week.  Actually, scratch that, I'm completely hopeless. I calculated that I've earned the grand total of €50 and I've spent more than that on butter alone, I reckon. Lashes' birthday involved a vein of deep and unexpected melancholy (ten years! It's been such a turbulent decade, and last night it made me very sad to think about my mum not being around for nine of those years to see how that furiously determined baby she adored turned out), industrial quantities of buttercream and some slightly fraught rat training. He has acquired two, a grey one and a piebald one. So far they are called 'Shit, grab him, he's getting behind the radiator' and 'Where's the other one gone?' They are not exactly pro-human yet. They are very good at shitting and escape, but thankfully quite puny at biting.

I also have a revolting summer cold that has reduced my brain to a sort of angry, self-pitying porridge and then Satan died today, which, if not unexpected (he was ancient), was rather sad. Brilliant, mean, enormous, fearless Satan. I miss him already. I keep glancing out in the back garden and expecting to see his vast dark shadow loom against the back door, blocking out the light and bashing on the glass with his giant greying paws and threatening all perennials within a five mile radius. I was glad to note this afternoon that he completely finished off the hostas and the Solomon's seal before dying. You go, old lad.

(I did laugh, however, when B asked me whether I had considered facial moulding of the departed, and opined that taxidermy, although superficially tempting, might have been a difficult task in view of Satan's vast bulk)

So, for comfort and solace and to take my mind off everything, we went to Brasseries Georges for lunch. Brasseries Georges is one of my Brussels happy places. There was a terrible rumour that its lease had expired and it might shut, but thankfully it seems to have come to nothing. It's the kind of place you can't imagine ever closing down, or changing. I hope to still be going there when I'm a hundred. 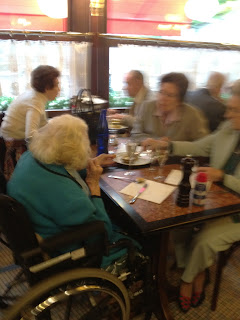 Which is about the average age of customers, coincidentally. 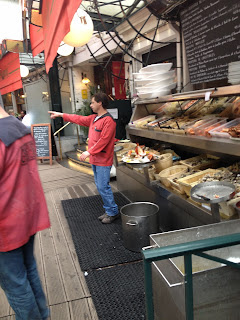 At Christmas and New Year, they set up a sort of satellite tent for selling industrial quantities of plateaux de fruits de mer outside. I have never bought one, mainly because I tend to spend Christmas in a state of borderline mental collapse, or with vegetarians. One day. 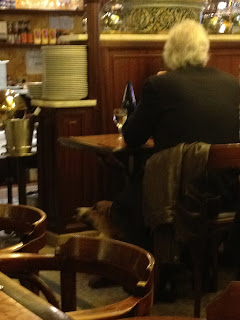 Lots of solo diners at Brasseries Georges, some with dogs. Lots of tweed. Lots of sweaters worn around shoulders. Lots of small pill boxes on the table, and carefully set, fluffy white hair. Lots of sedately delivered gossip. 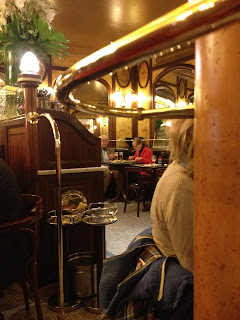 I love how all the pictures come out sort of sepia. Brasseries Georges is sepia. It bathes you in a soft, golden, forgiving light that smells of riesling and excellent frites and possibly some light adultery and definitely some heavy tax evasion. It smells of Belgium, basically. 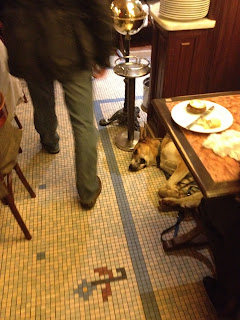 I had ultra rare araignée (the cut of meat rather than an actual spider) and chips and a glass of wine. And when we got back I was ready to remember how it's all ok, really, and how nice our enormous child is. 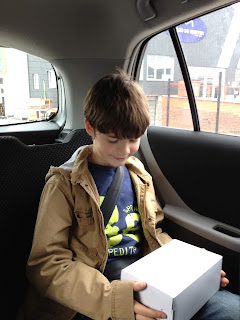 My sincere condolances on the loss of your bunny.

Beautifully written. I'm sorry about Satan, he was well loved in your family. I too wonder about the speed with which lives moves when I look at my boys (5 and 11). The eldest already talks about girls, I just want everything to slow down. Youth passes so quickly and almost unnoticed until suddenly being older has happened and mortality knocks.
I like your happy place for food, it exudes warmth from the pictures.

Can I just say, I love my boys very, very, much, and I remember that ten your old feeling (it got worse when no2 went to secondary school - really, really, no more small children). But no1 is 17 now, and really, we love him beyond imagining, but it is time for him to go now.. he doesn't need us now, and really needs to learn to do it for himself. I think it's called 'natures way'....
it happens before you know.. but it happens..

I am sorry for your loss of dear sweet Satan. Such is life sometimes, you gain two rodents and lose one.

Happy Birthday to the giant boy!

I second everyone's sympathies about Satan. He has gone to terrorise / horrify all the occupants of the great big hutch / flower bed in the sky. And welcome to the new additions. You seem to have the same feelings towards them as I do towards newborns (uncertainty and resignation). But mainly, happy birthday to your beautiful son.

In honor of Satan--

I am so sorry the lowlands could not catch up with progressive medieval concepts before his passing. So very, very sorry.

I am so sorry about the loss of bunny Satan. They're such lovable creatures. I was devastated when our bunny died.

So sorry you lost Satan. You did such a wonderful thing giving him a home!

Many happy returns to Lashes, first of all, and I'm sorry about Satan too. I rather like big awkward buggers who insist on having it their own way.

RIP big ugly Satan. Perhaps gardening can be your solace. Now that it's theoretically possible.

I have little sympathy for pet rats. But I hope the 10 y.o. bonds and finds them good company.

I have a ten year old and a just turned 8 y.o. So I know the surprise you must feel and the gratitude at having been able to grow them this big with no prior parental experience.

Oh and when I die I want to go to Brasserie Georges too. With my fat dachshund and my cardigan.

Oh no, I'm so sorry about Satan! He arrived so suddenly but became a fixture of your posts in record time. I'm glad the Brasserie cheered you up.

Ten years, my goodness. My oldest, also a boy, will get in five years, which is really very little time, but it seems unimaginable he will be that age all too soon.

Oh no poor Satan. I do look forward to hearing more about the ratty doings though.

Birthday festivities here ended up with a dead mouse (not a pet), one of them must have trodden on it in the melee, and a cut open head. Also I cannot quite imagine taking enormodog to a brasserie. He has very nice manners but might stand up under the table and carry it around with him.

It was nice to be reminded about brasseries George. I went her with my boyfriend and his father when I first visited the family at home. I refused to speak french ( i have a decidely pronounced south yorkshire twang when speaking french - much more of an accent than my boring english one) and realised that Henry was the one for me over plats de mer. 12 years, 6 years of marriage and 2 children later we are still together. Thank you for reminding me.

funny you mentionned Brasserie Georges. it used to be my Gran's favorite. I rarely go there now, youngest is allergic to whatever comes from the sea,and having her face and body swollen double+a night in a dutch A&E was trauma enough not to try again, but whenever I'm near that place,I think of Gran and the huge plateaus she would order for the whole family for christmas. I'm so sorry to hear about your loss of Satan.He wasn't so much old,wasn't he?