This, the best announcements by Belgian railway guards, is the funniest thing I have read for MONTHS. French speakers only. I mentioned it on Twitter a few days ago, but I still love it. It encapsulates everything about Belgium that amuses and delights me.


What else is happening in Belgium, I hear you ask in your ones and occasionally twos?


1. The chip figurine I have been trying to photograph for months is still not out, though there is a nice mural of him on the front of the chip shop. I think they are scared I'll steal him, which is actually wrong, because I'd be scared to touch him. He is definitely some kind of sex pest. 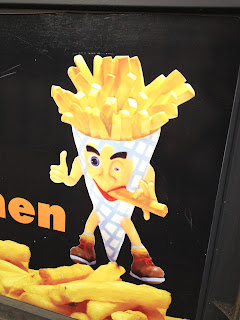 THE TIP OF YOUR CONE IS TRAILING ON THE GROUND, SIR


2. I was furiously to learn from one of my neighbours that whilst we were in London, the incredibly grumpy hairdresser with the incredibly retro window decorations in our street was filmed for a Renault commercial. Apparently there was a chase scene in the street and everything! HOW can this have happened while I was away? The only exciting thing to happen in Uccle since the Napoleonic wars, and I missed it. I am left to try, hopelessly, to imagine the scene, and also wonder how much they paid him (I bet it was a lot, he is a miserable bastard and would not do it for love). Coming soon to a screen near you: my miserable bastard hairdresser neighbour and possibly my house en arrière plan. Fame, at last.


3. I am collecting 'StreetStyle Uccle' subjects, gradually. Today I added 'woman in a back fastening hospital gown at the bank' to my collection. A bold choice. The sun has also brought out Reclusive Neighbour and his Special Bench Of Crazy. 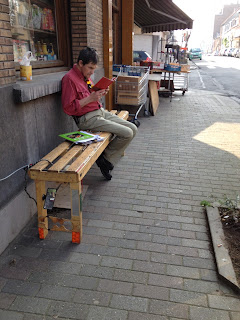 Cache of batteries and sheath of mystery papers hidden under science magazines!

I am considering stealing the design, making my own and selling them on QVC. Buy now while stocks last, ie. before Reclusive Neighbour takes it back inside with him. Which he does. Every night.

4. The Belgian candidate, Iris, has, with wearying inevitability, been eliminated from Eurovision at an early round. Would You? No, apparently we wouldn't. Reduced to two nationalities to choose from, we hesitate. Anggun, or Engelbert? La peste ou le choléra? I was rooting for the greasy, funk menace of Rambo Amadeus, but he too has been eliminated.

5. I am experiencing yet again the strangeness of having only one child around. So quiet! So easy! And yet so odd. I forget about not having Fingers around for huge swathes of time (well, you know, they are usually at school), and then suddenly remember and am filled with disquiet and miss his strange, insistent whispered messages in extremely precise, accented English. The big one is pretty nice though. Tonight we went and ate bad pizzas on a swing, then he read me a selection of disgusting extracts from the Grand Livre de L'Incroyable, which is a sort of extra-vulgar Guinness Book of Records substitute. I know a lot about freakish extra limbed creatures and hideous deformities now. In return I forced him to watch an episode of Thomas the Tank Engine which used to terrify him, and which now made him laugh like a drain. Better still, we discovered there is a whole vein of appalling fan homage videos recreating Thomas's Greatest Catastrophes. WHO does this? We watched a slightly balding tennis ball menace some Brio trains until we nearly cried laughing. I can't find it now, but frankly, it was quite an acquired taste so I don't think you're missing out too badly.

I am trying to appreciate every second, having read this lovely post about big boys, which set off lots of echoes. Soon, Fingers will have harvested enough barley at the collective farm to be allowed home and this tiny special hiatus of leisurely rat feeding and admiring photos of people who are half-mollusc will be gone again. 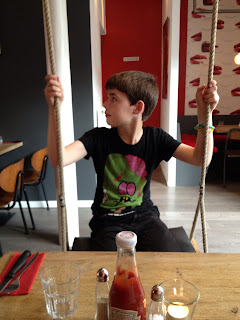 Oh, I want so much for you to write a French lesson book. Even my teens, who are struggling through beginning French, would not be able to resist practice sentences like: "Votre train accuse un retard indéterminé en raison d’une collision avec un poney. (Pause) C’est un petit cheval."

You modestly recommended watching The Apprentice before reading this. Well, obediently I began Lord Sugar's latest trial of tedium, but I gave up and read this wonderful post instead and it was far more entertaining! Many a chortle...which is more than I can say for Karen, Nick and co.

I look forward to further weirdos from the streets of Uccle!

@Taxmom: brilliant idea! hope she takes you up on it.

Here it is - I like this a lot! Obviously I have too much time on my hands, but enjoyed all this very much. My son was scared by the first entrance of Diesel about 20 years ago - way too growly!

I saw one of those chip-man things in Holland once: http://www.flickr.com/photos/simonlitton/2814207382/

Those announcements had me chuckling for hours on end, everytime I thought about it I started laughing all over again. My boss definitly thinks I'm crazy now.

I do understand you...You can finally feel relaxed on one hand and you already miss them on the other...

Well, thank god they clarified the poney thing. Because I thought it was 'un grand cheval'.

My French is almost nonexistent, but apparently train announcements are like Babelfish: I understood perfectly. Question: Is the container on the window ledge behind your neighbor part of his set-up? If so, what is it?

Follow up...when I read it aloud to my older teen he said, "But was it MY Little Pony" (Geek humor).

The most Belgian train announcement I know is the non-existent one. I've never had any information whatsoever on a train, funny or not. This leads me to believe that the website in question is fake. Any proof of the contrary?

Tilia (admittedly not a very frequent train-traveller, but it does happen)

I love the special bench of crazy. A rear view mirror! I'm surprised he doesn't wear a crash helmet while sitting on it.

Is that a partially covered up hole under the bench? Is this where he goes every night?

We have one of those freaky chip men outside the chippy opposite Bromley South...it always makes me think of Belgium. Shame said chippy doesn't do friten met stoovleesaus...

Rat training....eeek! (as they used to exclaim in the Beano and the Dandy). My sister is currently defending her back garden from a rat invasion or more aptly, occupation. They are under the shed and surviving on the bird food. The rat catcher has been round and laid down poison (first two visits free, then she has to pay per visit. Rat catcher marketing is a tricksy business!!) The next door neighbour is also fighting the occupation. BUT, the other neighbour has taken a 'no furry creature shall be harmed' stance.This is going to get messy!