Staring fixedly at walls since 1974

Let's start positive. I like this very much, which I plucked from the mouth of some kind of deity, guarded by a portrait of Princess Diana, yesterday at a presentation thingy. 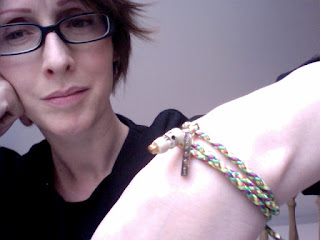 I know that sounds like some kind of fucked-up dream sequence, but I promise it actually happened, look and more pictures here.  I loved it. I could have stood in front of it for hours (actually, staring at the table decoration would have been an improvement on standing in the middle of the room looking like a tool and not knowing what to say to anyone, which is what I actually did. GOD. I am thirty seven. Am I never going to be able to do small talk with strangers? Never? There was a golden period of about 18 months when I could do 'conversation' in 2005 because I was on double doses of anti-depressants, but the superpower left me as soon as I reduced the dosage. I will be in the corner of my nursing home fifty years hence still pretending to find a section of wall fascinating. What a desolate prospect).  The nobbly thing is a sort of multi-faceted skull. Really. The skull seems to have three faces. It fills me with happiness.

Also, it was free stuff. Free stuff is never, never not amazing, is it? The person who is tired of free stuff is tired of life, as I believe Dr Johnson said in exchange for a complimentary periwig. I also got a pair of very small maroon socks, and a cube that may or may not be soap this week, and this evening, a miniature tube of paprika Pringles. It has been a VINTAGE week for free stuff. 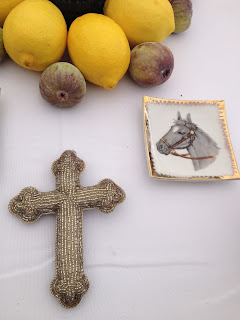 ..was also part of the display and I confess I was terribly tempted to put it in my pocket. I didn't, but I will be telling my children that a horse ashtray and beaded crucifix would be perfect Mother's Day gifts, and leaving them to get on with it.

Apart from that, I have taken delivery of the Rat Pleasuredome, which appears to be called 'Extra Large Ferret' (or rather XL Furet). It seems worryingly enormous. Perhaps the idea is that I move into it, and the rats takes over the rest of the house? I can deal with that, as long as the rats are also in charge of dog-walking, picking up discarded pants, cooking ninety five variants on mince and negotiations with HSBC.

Pre-rat tidying is going well, as you can see: 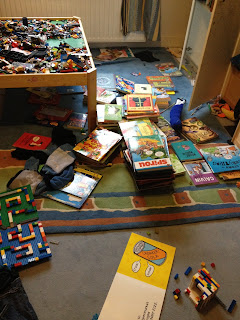 To the bottom left of that picture you may be able to make out Lashes' main contribution to the whole rat preparation operation which is 'A rat Lego labyrinth'. It would have to be a bloody thin rat, when I have been promised - and, indeed, paid to house - a fat, jolly rabelaisian rodent.

In Things I Am Sick Of today:

- French television election coverage. I literally cannot bear another moment, it is making my brain bleed, Sarko trying to emote with his tiny fists clenched, the gentle shimmy of Hollande's neck wattle as he gets vehement, the fact that one in five French people voted for rabid, frothing harpy Marine Le Pen. There is another week left. A week! Laurence Ferrari, the blank-visaged blonde 'speakerine' on TF1 haunts my dreams. I am reading Montesquieu instead and learning classical arabic*.

- My neighbours with their current alternating schedule of attic based R 'n' B and screaming at each other. I feel almost nostalgic for The Catholics. No, actually, I don't.

- The Gulag's suggestion that I come to school tonight in order to buy one of my children's paintings which is in all aspects identical to the paintings of the other 424 pupils for €10. €10! This coming the night before the 'Fancy Fair' (terrible disco numbers as discussed in the previous entry, plastic beakers of warm beer in the bleak wind tunnel that is the school yard, widespread extortion for plastic tat) seems a little cruel. The painting in question is of a peacock, however, which may sway me.

- iPhoto which is being an attention seeking dickhead. Fuck off, iPhoto.

- My continued anxiety levels, still set at XXXL Cortisol Alert, 3 Panic Attacks for the Price of 2!

- Birthday cake requests: 'Can you do, like, a bottom layer of intertwined snakes, then a middle layer of chocolate brownies, and then top it with strawberries and whipped cream?'

'I'm not promising anything'.

I could continue the 'complaining' section of this post almost infinitely (itchy ears, weather, law, etc etc) so I am going to just cut myself off unceremoniously.

In 'Local Colour' corner today, I give you one of my favourite shops in Brussels: 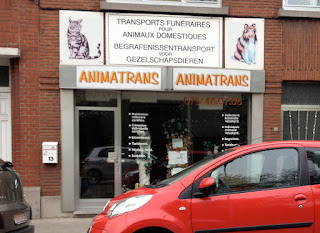 As I sit in traffic sometimes outside this magnificent enterprise, snapping at my children and worrying about how I will manage the extremely tricky left turn into heavy traffic pursued by the steely wagon of certain death that is the 97 tram,  I wonder what it would be like to work there. What would you do exactly? 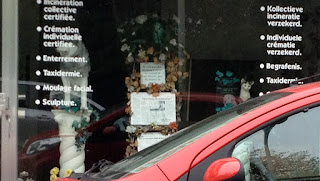 Then I wonder what kind of animal you might consider post-mortem 'facial moulding' for. I might have to start saving for Oscar and Satan already.

Please, please vote for me if you haven't already. There are only TWO AND A BIT DAYS LEFT. I really really really want to win. There is apparently a ceremony! Imagine! I could go and stand uneasily near the snacks on my own, then pretend to be fascinated by the table decorations, then hide in the loo for twenty minutes, then sneak out the back! It will be the social high point of my year, truth. Do not deprive me of this. Please? And thank you for your continued patience with this half-arsed pimping.

I dusted off my HS french and voted for you! Were those displays like Day of the Dead displays that we have here in California, via Mexico? Also "rabelaisian rodent" is a perfect phrase. Finally, do you think if I arrange it in advance, that store will summon some cats for my funeral cortege?

I like the skull bracelet! Also, very Christian children get those crosses for their Christenings.

Why would you PAY for your own child's painting. You gave them life, you should get any painting you want for free.

I will personally see to it, Taxmom. Or perhaps my heirs will. I will be busy staring at that nursing home wall, or dead. And thank you!

I can't make small talk either and have done much wall staring in my day. This is one advantage of having a cell phone, because now, instead of staring at walls, I pull out my phone and read over my text messages, or possibly send texts to someone who won't mind hearing from me, like my kids. Then at least I look like SOMEONE wants to talk to me.

We use only the freshest hell hier, and the niet reanimeren tattoos are free.

'Niet reanimeren' is going to be my new gmail status.

I used my HS French too, but have no idea whether it worked or not, fingers crossed. I also have itchy ears, which are driving me beserk. It seems it is not socially acceptable to scratch at your ears constantly - who knew?
I know you are heading for DefCon 4, but wanted to say that your writing lifts me, every time, so thank you, stay cool...

Can you get away with jelly snakes in the birthday cake? The Natural Confectionary Co (I think that's what they're called) do very delicious ones... (and THAT is why I am banned from attempting to make birthday cakes, ever)

I have one of those silver ceramic hands, if you would like one to start off your own collection! My siter gave it to me because she didn't know what to do with it, either. So far I can only think of placing it in the middle of the pond balanced on a pile of bricks. Sort of Lady of the Lake 2000ish.

check cashing near me said...

In USA you will realize U.S. Everyplace, every city and 24/7. We honestly want to serve you the simplest matters with 100 percentage satisfactions. It is extraordinarily exhausting to say as soon as exactly must be forced to money your test.