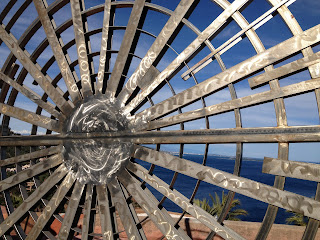 This is Pierre Cardin's Palais Bulles. It is completely AMAZING. 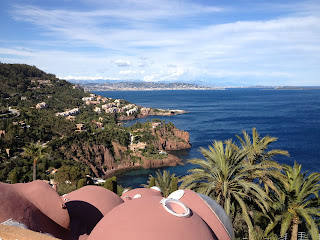 It was built by a Hungarian architect - no, actually, he doesn't like to be called an architect, he's a "habitologist" - Antti Lovag. Construction started in 1975 and didn't finish until 1989. Apparently Lovag planned to live in it himself, but Pierre Cardin made him an offer he couldn't refuse (afterwards, he went off and made himself another bubble house to live in). The bubbles are all connected with twisty, confusing trogolodyte corridors lined in pink tinged marble. It is profoundly bonkers and rather wonderful.

I want Pierre Cardin to adopt me now. I want to move into a bubble. Ideally one of the ones where you open the porthole and just jump out into the series of waterfall pools (maybe not today, it is COLD. The swimming costume is staying exactly where it is, in the bottom of my bag). 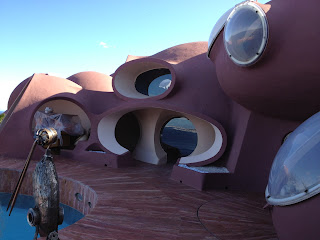 The interiors are just as batshit amazing as the exterior. I like this meeting room: 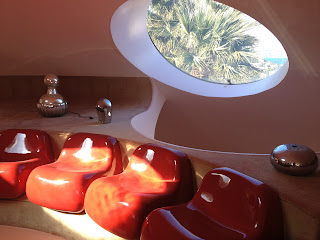 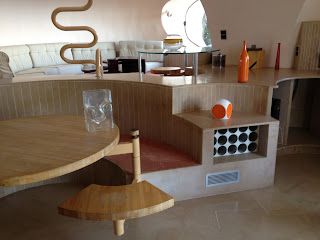 Take that, Miserable Modernists! Up that wiggly bendy ladder thing is a special children's bubble: 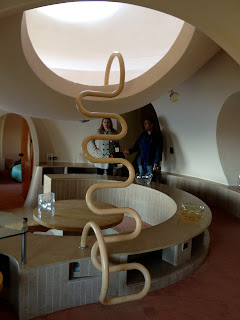 The whole full of Pierre Cardin's furniture and other crazy ass stuff he made or collected and each bedroom (THEY ARE ALL INSANE) is decorated by a different artist (one of them is sperm themed). 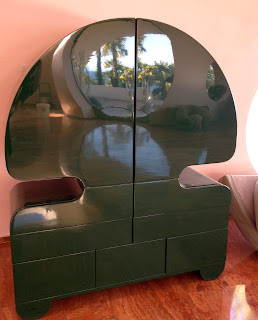 And there's even a whole apartment underneath the swimming pool. Oh yes. 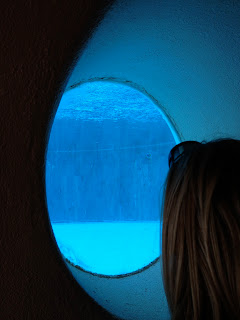 Sorry, I know you don't come here for actual useful information but I found it entirely mindblowing. Also, I have literally nothing whatsoever else to report, because I spent most of the day in my fancy bed, doing some light spreadsheet wrangling whilst listening to the wind whistle among the pine trees, and eating chocolate olives. You will get no complaint from me, it was very pleasant. Tomorrow I am going home, so I won't be able to subject you to any more poorly composed photographs of odd things,  at least not ones with bright sunshine. 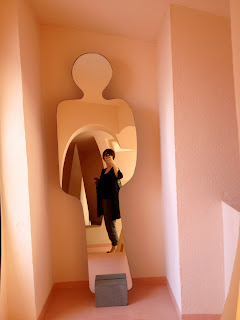 Do you suppose bad-habitologist is also a vocation, because I think I've found my calling.

Oh wauw, insperational in an unsettling kind of way...

I love it! Batshit crazy is the best kind of architecture. Can't wait to see more of the travel blogging.

Super cool! More Belgian Waffle 'substandard travel blogging' please! Way better than the standard '10 things to do on half-term in Majorca other than gouge your eyes out' stuff.

Oh DEAR GOD that place is incredible. Amazing amazeballs! There is a sperm-themed room??? Is that the wriggly ladder? What does it impregnate? I want to live in a bubble house, too. We should be neighbours and be miserable modernists together. xx

Any disease will surely recover, if we want businesses seek treatment :)

The top rack likewise adjusts up and http://jigsy.com/ A few of this roominess is good dishwasher for the money The 500 has the capability what is the best dishwasher every item of offering ware in your home. Best Dishwasher Detergent Reviews [July 2018] however the Bosch 500 series does give read more if you have young kids who like.