Milkshake dodo and other minor complaints

Ok, back. Enough of this 'shops' and 'views' and 'sites of architectural interest' stuff. Let us get back to essentials: gentle, but sustained, grumbling. It is 8°C in Brussels, with a persistent, heavy drizzle and a bonus high wind. I have come back from the airport in the company of a taxi driver who did not know where 1. The Cinquantenaire 2. Montgomery roundabout; or 3. Avenue Brugmann were (non-Belges, these are incredibly well known bits of Brussels, like, say, not knowing where Marble Arch, or Holborn, are). I did at one point wonder whether I should text his registration number to a friend in case I died in horrible circumstances, but since he looked absolutely nothing like the photo on the taxi registration document pinned to the back of the damp, mildewed seat (he had a bonus monobrow and a look of total, if quite cheerful, lunacy), there didn't seem much point. Anyway, there is an extra intensity to still being alive this evening, for which I thank both him and the strong cross-winds on descent into Brussels in the metal death tube. Even though all I plan to do with my extra vivid sense of being alive is go to bed with a cup of tea and read some kind of gloomy detective novel.

Actually, the reason I really need that intensity is because the children have been rehearsing their dances for the imminent gulag fête this evening.  Dear lord. I don't know why they don't vary the medium a little. Why always dance? It's not like any of the several hundred children I have seen flump leadenly across the stage, one glassy, roaming eye looking for their parents, seem to enjoy it: they have that frozen expression of intense, stiff concentration that speaks of much backstage shouting. Couldn't they, I dunno, sing us a song? Do a (very short) play? I have seen enough 'rolly-rolly arm - then - clap' and 'walk around your partner with your hand on their shoulder then back the other way' 'moves' accompanying '70s and '80s disco standards in my six years in the audience to last me several lifetimes. This year we have Mika's Lollipop, and an obscure French version - impossible to locate on the internet, which gives me increased respect for the internet, actually - of the Hair standard, Let the Sunshine. I am, frankly, over it before it has even started. There are not enough complex paper tokens allowing me to buy small quantities of warm alcohol in plastic beakers at vastly inflated prices IN THE WORLD to make this enjoyable. Unless the headmaster dresses up. I like that. My passion for him has mainly dimmed, but on special occasions like this I take it out and polish it up again.

Anyway, I have sent them away. Lashes has been tasked with tidying his bedroom to accommodate The Imminent Rat (Rats, even. I have read widely on the sociable nature of the rat, and apparently we must get two fat, lazy, cuddly males with enormous testicles). Thus far he has: put a barbed wire temporary tattoo on one nipple and taken all the books out of the cupboard and placed them in a heap on the floor. I query the effectiveness of this approach. I went past half an hour ago: he is sitting contemplatively in the midst of all this chaos of his own making in a nest of dirty socks and bande dessinées, reading a dog-eared manga for the 900th time. Fingers sidled downstairs to tell on him a few minutes ago.

"As-tu vu sa chambre?"
(He has stopped speaking English in the two days I was away, dammit).

"Not recently, but I imagine it is still a scene of indescribable devastation?"


I had better go and do some light bellowing. But I have accustomed you to high quality visuals over the last few days and I do not wish to disappoint you, so here are my children tonight: 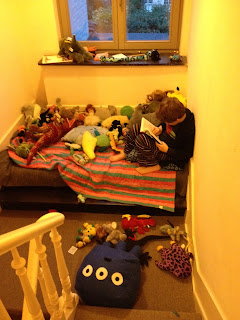 I don't know why this one is so yellow. Maybe the house has jaundice. I wouldn't put it past it.

You will note that the large three eyed plush blue cube Fingers ordered  from Lucy Moose for Christmas with precise measurements, a technical scale drawing and minutely detailed descriptive notes has been accessorised with a moustache. That is how Fingers rolls, presently, with prosthetic facial hair in all circumstances.

Imagine several large testicled rats festering in there. It doesn't bear thinking about. He is amused, however. 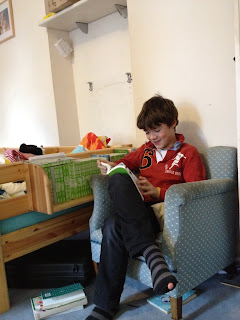 Then, randomly, to continue the 'shit travel blog' theme of previous days and because it cheers me beyond anything, here are a couple of picture from my very favourite Dodo Manège (merry-go-round of extinct and endangered creatures) in Paris. M and I went to try and see it, but it was shut, so we sneaked our cameras under the tarpaulin to try and take pictures of what was lurking. It was quite magical actually: 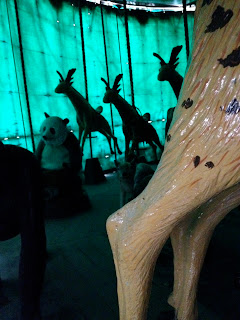 Though the Dodo is not amused: 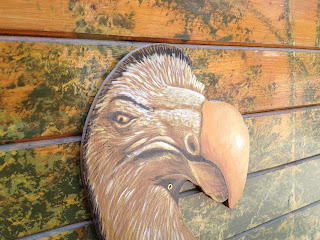 And my favourite, on the wooden hut where you buy your ticket: the dodo, still apparently furious, but with a MILKSHAKE. 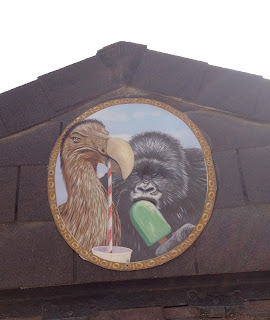 What did your Wednesday hold? Are you as angry as a dodo with, or even without, a milkshake? Please share with the group.


(Remember! Vote for me and we might win a pony*! Yes, I am still on about that, but there are only 4 days left, courage. More detailed instructions on how to vote at the top of the sidebar).

Damn! Your photo of the manège is better than mine. I like the underwater feel and the fat giant panda on the floor.

Wednesday saw me going to one of those jungle-gym places they favour in the UK, with terrible acoustics, screaming children and lots of chewing gum stuck to the floor. When the kids were younger I loved these places as it gave me an hour plus of 'time-out.' Now the kids are older I get slots of 'time-out' without a jungle-gym as a prop.
After 2 hours in 'iKidz' I had wound myself into the far reaches of my 'I will be a bag lady soon' with a coating of 'will I ever work again?' fantasy...T'was not good. Thursday will be better!
Can you really no get fresh milk in Uccle?!
And, can we vote for you more than once?
BB

Hey....I did manage to vote for you! and no thanks to the pony. we had one once.
rats make great pets, I hear.

OK, I have vote. Also I have vote for many confusing things including geeks, gays, and who knows what. There had better be a pony, although there was no mention of a cheveaux (or a cheveaux, I always confused the ponies with the hair.) perhaps you have misunderstood and willbe actually getting a lifetime supply of hair product.
I do speak normal English but after trying to read the French directions I somehow started channeling Borat, sorry.

Hello. I finally feel like I have something potentially interesting to contribute, so here it is: this evening I hosted a beauty/talent competition at a college dorm. I'm wondering whether to put that on my CV. Any thoughts?

I tried to vote for you but something went wrong. I'll try again. But will they accept votes from people who live, erm, pretty far from Belgium, say, in the US?

My wednesday brought me the obligatory football. It also brought me the intense pleasure of seeing my cat jump up to the ceilinig everytime my husband shouted. Very entertaining actually.

A+ for yr rat research - I approve! Males much more amenable and you get used to the giant bollocks...

Also I have voted, at least, I have done my best to vote (on account of having limited French and an address in an Outpost of Empah). Bone chance. Hilarious post, by the way.

That should be the rat marketing board slogan.

"Rats: you don't notice the giant bollocks after a while".

Thank you all for voting. I don't think it matters WHERE you are, you are still allowed to vote. We are inclusive like that in the Belgiana.

Susanjane - A year's supply of hair products would be an IDEAL gift for a bald woman. Hmmm, I suppose I could sell them?

happy to be here
from Turkey

Um, do rats smell? Or are they odourless?

I am starting to feel slightly anxious about my long-fingered small boy and his future desire for pet rodents.

Also, I am cackling at "bone chance", above.

Birdy - I fear there will be odour. I will let you know.