In which I try to recall the last week 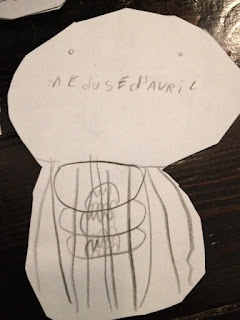 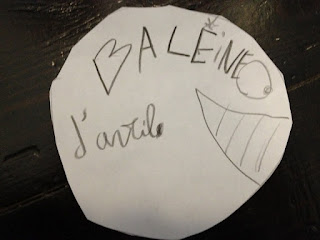 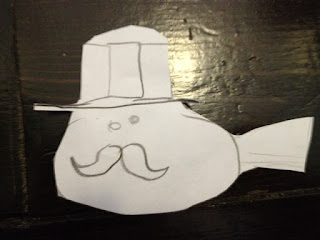 (I think this is an April Walrus)
No, I have no amusing hoaxes for you. My resources of 'amusing' were exhausted by mid 2010, as this weblog testifies. My children were deliciously cuddly and tactile today, but after a few hours I realised they were sticking paper fish on my back, which is the rather low key and decorous Francophone version of April Fool's. Ah, small children. I still win because I get to cuddle you which you would resist like rabid weasels under other circumstances but sssh, I will not tell you that.
I have little to relate. The last week has been lacking in drama, which is just the way I like my weeks: the facial leprosy has receded slightly, but instead I have grown another chin. Apart from that I did a bit of work, went to a beauty presentation with toothpaste in my 'hair' (also sweating and smelling like a sheep), read several books and spent every spare moment staring at baby owls sleep. There was an unfortunate diversion on Thursday, I think, into watching videos of peacocks attacking things on YouTube but I think I've managed to knock that burgeoning habit on the head, the owls must not become a gateway drug to more bird based procrastination. The weather was supposed to get bad, but it still hasn't done so and the livestock have been sunning themselves. They looked a bit defensive and shifty when I took this picture, like people having an affair getting caught in a restaurant together.
'Yeah, such a coincidence! We just ran into each other here. Satan was just, uh, keeping me company until my client arrives' 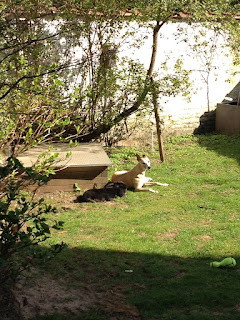 We have been to Heysel this weekend, the balls of steel theme park where hope comes to die, where the wind whistles round the mildewed corners of the replica Vesuvius in Mini-Europe and puzzled tourists walk the alleys of filthy fast food outlets wondering how on earth they ended up here and when the coach is coming to collect them. We went for a 'Taste of Asia' exhibition which turned out to be 80000000 million Belgian teenagers dressed in fishnets and furry leggings and Pikachu suits and Totoro hats and full combat gear with biological warfare masks, and all of them carrying RIDICULOUS PLASTIC WEAPONS all buying expensive Japanese tat and playing dance based video games. 'Japanese stuff' with a downstream market of 'ridiculous replica weaponry' is clearly a growth industry, if only I still had my job as a junior legal advisor to the makers of Pokémon cards, my future would be assured.
As it is, I felt fully eight hundred years old and permanently querulous. Most of the people in disguise, and many who weren't were wearing or carrying 'free hugs' signs. Why is this free hug thing a thing among Manga lovers and other kawaii types? No, thank you. Sans façon. I would not hug you even if you were paying. That Naruto boilersuit is plainly made of man-made fibres and it is very hot in here. The children were a little overwhelmed, if delighted, at this vision of their futures and I kept having to steer them away from the tables with handmade signs that said 'nous dessinons du gay porn'.

After that we repaired to The Worst Mexican Restaurant in Europe (really, I defy you to find worse) and I had a mixed frozen veg medley (carrot, broccoli and cauliflower) fajita flavoured with orange sump oil which managed to make me feel good about my own cooking. THEN we watched Pirates in French and when we got home, I still had to walk the dog. It was a full and frank day and I have refused to leave the house today, muttering in the kitchen with my Dan Lepard baking book and chasing the children away with big sticks when they tried to approach.
(That is not strictly true. I actually allowed them in the kitchen to make cookies, then dick around with Fimo, which I thought was pretty decent of me. I am exhausted with the breadth of our holiday fun and the holidays have not even started in earnest. Also, I discovered whilst trying to remember how hot you cook Fimo that the internet is full of overwrought crafting types worrying that their Fimo is trying to kill them. 'Will I die from Fimo polymer clay?' they ask, which makes me want to put on my best Dr Spaceman face and make up something terrifying. )
I made a lemon and poppyseed cake without poppy seeds from the Dan Lepard book, incidentally and I do not much like the cut of its jib. This has not stopped me from eating fully 1/4 of it (it is a large, large cake) to try and pinpoint what, exactly, I do not like about it (coarse texture, partial use of oil in place of butter, insufficient syrup). I feel faintly disgusting now, so all is as it should be for a Sunday night.
Now I must go to bed because tomorrow I have to deliver the children for their first day of cutting giant tortoise toenails and snuggling lemurs here, and then approximately five minutes after I drop them off, I have to die of corrosive, unbearable envy towards my own offspring. It is a full, busy programme.
(PS: Next week I am going to Antwerp. What do I do in Antwerp apart from go to the zoo and aquarium? I have been to the zoo 900 times and the aquarium 500. I hear there are good shops and cafes and 'culture' and other untold wonders that you do not find between this house and the corner shop/parc du caca. I am hungry to know more and stray beyond 'that square in front of the station'. Please, suggestions, belgo-dwellers who are less insular than I).
Posted by Waffle at 23:32

The fashion museum in Antwerp is pretty decent, depending on the current exhibition, and the neighborhood it's in offers killer window-shopping and hipster-watching. --Mary Anonymous

I know nothing of Antwerp, but I am very familiar with feeling disgusting on a Sunday night. I have overindulged in chocolate chip cookies today, although I am supposed to be following the Dukan Diet.

Patricia, I'm "following" the Dukan Diet too! And by "following" I mean "discussing in great detail with my husband while drinking wine even though I said I was giving up booze for April to help lose weight." So: check on feeling revolting on a Sunday night. I'm going to google things to do in Antwerp now.

The Momu is usually worth a visit.

Can sympathise - will shamelessly steal hugs any way I can get them from the children these days. Perhaps the little Dr Seuss fish will take off here ...

I would go to the MAS, as red sandstone and corrugated anything, even brain tissue, is pleasing to me in a retro sense. Of course, if you're taking the children, small boys usually gravitate towards fashion exhibits, some anyway. Personally, 'that square in front of the station' (if one is cosmopolitan enough to find the front) is a favorite. Making fleeting eye contact with Orthodox men is inescapably intriguing to me, a psychic two-way boulevard of nothing in particular that you can put your finger on. What with the added and sought after opportunity to jump into a cab, this area is unmissable.

Re Dan's lemon drizzle cake, I think it's the use of oats that makes it wrong. I don't like to chew my cake, I like to inhale it before I realise how much I've eaten of it. Also, more syrup would help with the whole inhaling cake thing

Becca - I totally agree. That oats thing is spooky. And yes to doubling the syrup.

Frau Antje - I am not taking the children! All the better for fleeting eye contact fun.

I thought that zoo-thingy the kids are going too was called Park Lacklustre at first glance...

HA. That would be amazing. Like something from a Belgian Allan Sherman song.

No 1 son (aged 17) went on a school trip this week which included going to the Fashion museum... they took a wrong turn into the red light district ('Mum, we turned a corner and there was a real woman in the shop window, dressed in lingerie.'.. delicately put, I thought) it improved his day no end.. education all the way...

I am so glad to learn "sans facon". Does it have the same kid-flavor as "no way!" does in English? Or is it proper grown-up speak?

I mis-read that you were in the kitchen with a Def Leppard cookbook. Not sure what you'd make out of that.

My daughter (10) was reminded about April Fool's about noon. She was shocked and horrified that she'd almost missed it. There was quite a frenzy of pranks as she seized the day.

Culture : MAS, MOMU, the Museeum Mayer - Van den Bergh if you like antiques, the St Petrus and Paulus church,etc etc
Food: Lombardia
Shopping: area around 'Wilde Zee' and Huidevetterstraat has nice shops and you can get great ice-cream at 'het bieke', oh and chocolates at Bury and there is also a cookieshop, but I forgot the name.
Plenty to do really

Your Site Is Very Good and The Post is Well On Topic, Thanks for Sharing it with us.